In early Chess, and Xiang Qi to this day, no piece has a corresponding piece in the dual direction. Thus there is
a Rook with no Bishop,
a Knight with no Camel,
an Elephant (Alfil or Xiang depending on variant) with no Dabbaba,
and a Ferz with no (capturable) Wazir.
According to one theory this was a long intermediate stage between a proto-Chaturanga with Dabbabas rather than Rooks and the modern European game with the Bishop replacing the Elephant. In Shogi forward-only pieces have no corresponding dual piece.

One way to address this imbalance is to add the dual pieces. Examples include the historic Timur's Chess to an extent and Fergus Duniho's Yang Qi, although the latter is still minus Camels. My own examples are Courier Kamil, Taijitu Qi, Mitregi, and Courier Ashtaranga. The latter two go further to apply the same principles to the front rank.

A more compact way to bring in all the moves is to make each piece a compound with its dual. This is what this page's variants do. A third way, extendable to variants with some pairs doubly represented but others entirely missing, combines each piece with another piece's dual. This now has its own page. 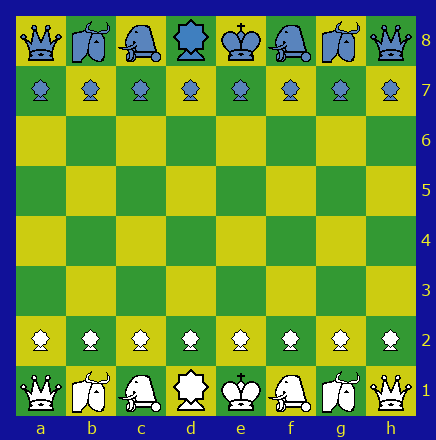 This variant is a dual-direction form of Chaturanga or Shatranj, depending on the promotion rule (see below). Ashtaranga means eightfold army, and in this variant each piece type represents two regiments - infantry and yeomanry (Princeling), chariots and couriers (Queen), cavalry and camelry (Gnu), and war engines and elephants (Alibaba). The Prince combines two kinds of adviser. 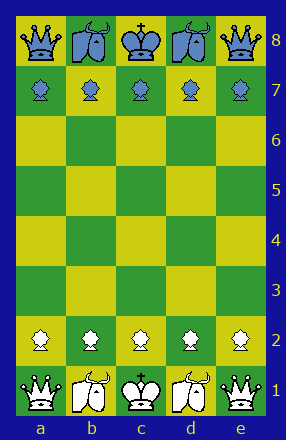 This variant starts with the FIDE array, combines Rook and Bishop files, removes the now-triplicate original Queen file, and again enhances Knights to Gnus. This concentrates two thirds of the power of the Wildebeest Chess first rank into just five pieces. 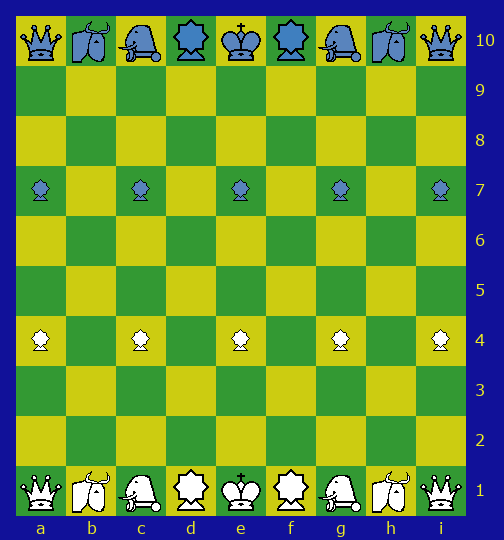 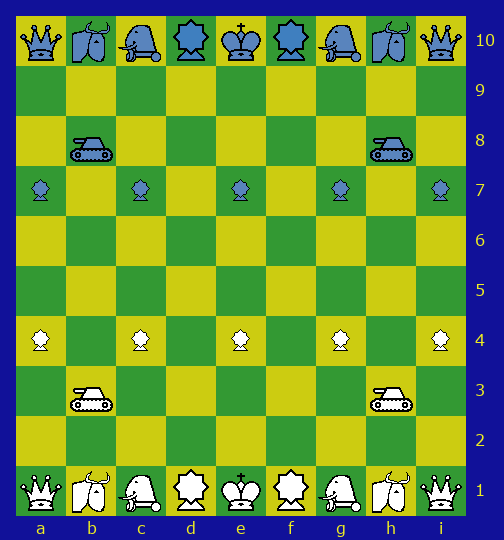 This dual-direction version of Xiang Qi takes two forms depending on whether derived from the pre- or post-Cannon form of the original. The boundary between middle ranks is a River. At each end of the middle three files are square fortresses. Note that Princelings initially threatened by Queens are guarded by Gnus. A Korean-style subvariant, ZEBUQI, replaces Princelings with more Princes and Alibabas with Zebus, and modifies the Tanks. An intermediate form between these and their Oriental originals is Fergus Duniho's independently-devised Storm the Ivory Tower, which has the same radial pieces (though weaker oblique ones) but restricted to different directions from different cells. 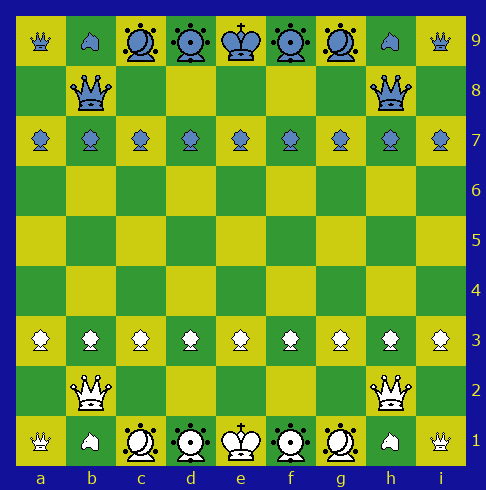 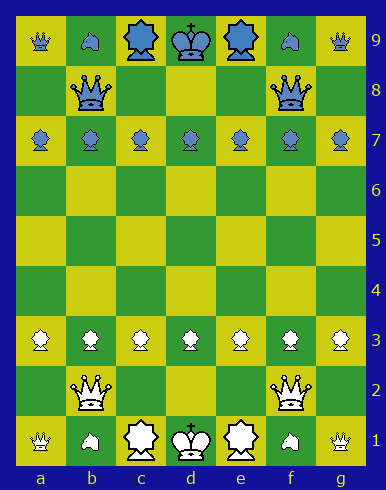 These are two different ways of applying the logic to Shogi. Totaishi Shogi (game with generals and promotion to princes) retains distinctive Shogi generals but changes promotion rules. Taishigi (game with princes) combines each pair of neighbouring generals into an unpromotable Prince, and likewise their whole files. Totaishi as distinct from Tokin (promotion to Gold) and Toyang (promotion to Hopping-capture pieces) 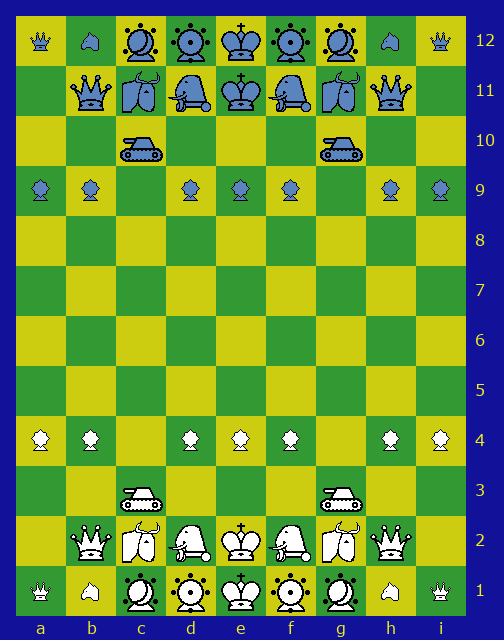 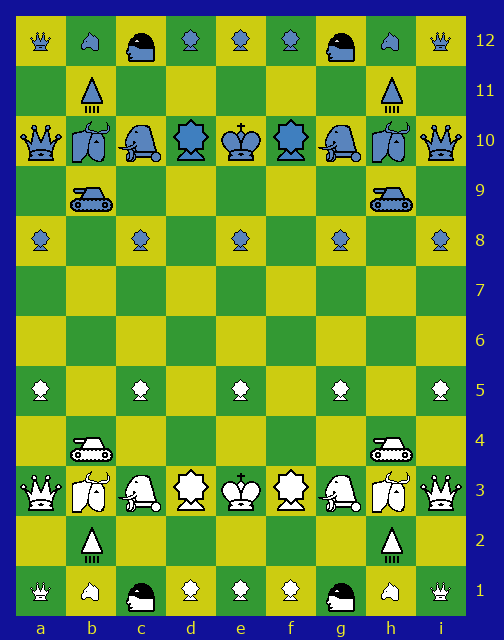 These combine Totaishi Shogi and Alibaba Qi much in the way that Shogi-heavy and XQ-heavy Shoxiang 108 combine Shogi and Xiang Qi.

Castling and Double-atep Moves:
There are no double-step moves, as Princelings are already considerably stronger than Pawns, no En Passant as a result, and no Castling as either the original variant had none or pieces are too close together.

Promotion:
Compact Ashtaranga has one subvariant with Princelings promoted to whoever's starting file they end on, in capturable form, and one with them all promoted to Princes. In Compact Wildebeest Princelings can be promoted to any capturable array piece on reaching the far rank. Alibaba Qi Princelings crossing the River become Princes, indistinguishable from the array ones. In the Taishi variants symmetric pieces are unpromotable, but part-symmetric and forward-only ones may be promoted to Prince at the end of a move starting or finishing in the enemy camp, except in Alibaba-heavy TA, where FO pieces are promoted to their symmetric counterparts. Forward-only pieces must be promoted on reaching a rank where they have no further move in unpromoted form.

Oriental Rules:
ABQ and Alibaba-heavy TA pieces, and symmetric Taishi-heavy TA ones, can cross the River orthogonally or Knightwise but not diagonally or Camelwise. Kings can enter and leave both Fortresses diagonally but not orthogonally while array and promotee Princes can do so orthogonally but not diagonally. Both rules are consistent with existing XQ moves, given that XQ Generals can never actually reach the River! Zebuqi's Zebus can cross Zebrawise (as Korean Elephants can) but not Zemelwise. Kings in all three variants may not face each other along any file, rank, or diagonal without an intervening piece.
Captured Totaishi Shogi and Taishigi pieces, and Generals and FO pieces in Totaishi Alibaba, can be reintroduced as in Shogi. Array Princes return still Princes, but promotee ones return unpromoted, and on a rank where they need not be promoted.

All these variants can be played with a standard set of the right general type - Occidental, Sino-Korean, or Japanese as appropriate. The need to distinguish AQ's Princelings and promotee Princes might be met by starting with the marked side down and Shogi-style flipping on crossing the River. Taishigi and Compact Wildebeest require special narrow boards, or some marker to exclude unused files.