The Dabbabah was a piece that already appeared in some very early variants of chess. Its name represents an ancient war machine, and is sometimes translated as war engine, although it is not known exactly what shape the physical piece had.

In different old chess variants, Dabbabah's were used with different movement rules, e.g., it has been used to name a piece that moved like a normal bishop. The movement given below is the most common and is the one used by modern inventions with the Dabbabah.

The Dabbabah is a (2,0)-leaper, i.e., it moves two squares horizontally or vertically. It can leap over any piece in its way and will capture any enemy piece on the landing square. 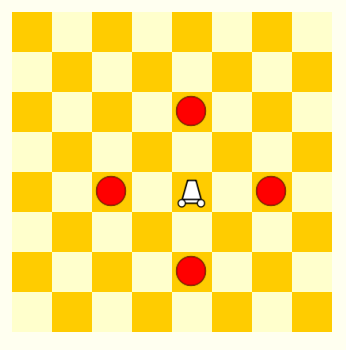