Different chess variants feature different kind of fairy chess pieces known under the name of Lion. By designers of fairy chess problems, the Lion is a well defined piece. Related to the Grasshopper, it is more powerful but less frequently used.

The Lion moves on the Queen's lines, but it must hop over exactly one piece when moving. So, instead of being able to move to spaces it has a clear path to, it can move only to spaces that are obstructed by another piece. This is like the Cannon in Korean Chess. The only difference from that piece is that it can also move along diagonal lines.

Its difference from the Grasshopper is that a Lion can move more squares after hopping over the intervening piece, whereas the Grasshopper must land on the space immediately after it. 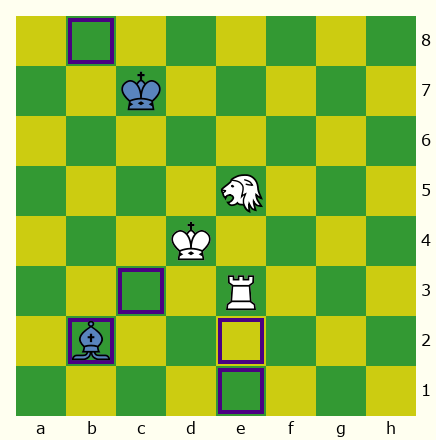 The diagram identifies each space the Lion may move to with an indigo box. The Lion on e5 can take the Bishop, but it does not give check to the Black King.