The Piececlopedia is intended as a scholarly reference concerning the history and naming conventions of pieces used in Chess variants. But it is not a set of standards concerning what you must call pieces in newly invented games.

Inspired by the Pao (Cannon) from Chinese Chess (Xiangqi), the Leo is to the Cannon as the the Queen is to the Rook. It moves as the compound of the Pao and the Vao, the diagonal counterpart to the Cannon. Like both of these pieces, it is classified as a hopper. The name of Leo was chosen for its phonetic similarity to the names of these two pieces.

According to The Definitive Book; Encyclopedia Of Chess Problems: Themes And Terms by Milan Velimirovic and Kari Valtonen, the Leo and other pieces based on or borrowed from Chinese Chess, were introduced to a wider European publicity by P.Seyfert-Bitterfeld in the February 1936 issue of Die Schwalbe (p. 97). According to Anthony Dickins, writing in A Guide to Fairy Chess, the Leo was introduced by T. R. Dawson from Chinese Chess, probably before 1914. (p. 11) The article Remembering Thomas Dawson (28-xi-1889 16-xii-1951) says he invented the Leo and Vao in 1912. Even if each thought of this piece independently, which is not out of the question, the earlier date for Dawson gives him greater claim to being the piece's inventor.

Its earliest known use in a game is Joseph Boyer's Lion Chess from the 1950s. More recently, it has been used by Fergus Duniho in Caïssa Britannia, a British themed game in which it has the heraldic name of Lion, and in numerous games of Charles Gilman, in which it is called a Tank.

The Leo moves like a Queen when it does not take, i.e., any number of empty squares on an orthogonal or diagonal line. When the Leo makes a capturing move, it moves along an orthogonal or diagonal line, but it must hop over exactly one piece, regardless of its color. After hopping over this piece, which is called a screen, it continues moving as a Queen until it reaches the next space occupied by a piece belonging to the opponent. It moves to the same space, capturing the piece by displacement. 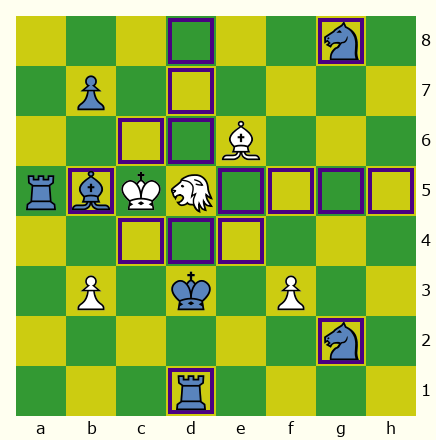 The movement diagram uses indigo boxes to show where the Leo may move. The Leo on d5 can take the bishop on b5, the rook on d1, and the knights on g2 and g8. It does not check Black's King on d3.

The Leo and Lion from Fergus Duniho's Abstract set. These show a lion, because the piece was named for Leo the Lion. The mane represents the directions the piece may move in.

The Leo, Lion, and Tank from David Howe's Alfaerie set. The Leo shown here depicts a Queen's crown at the opening of a Cannon. The name of Tank represents that this is a more powerful piece of artillery than a Cannon.