The rules should be made more exact rather than "All disagreements at the table (about the rules) are solved by casting votes among the three participants."

Here are some of my ideas about the movements (I don't know if they are correct):

Here are some of my other ideas of rules (some of which differ from the article and/or comments):

A correspondence Yalta game is being played at Rybka Rorum, we're playing with the rule 'the first player to checkmate another player wins'. 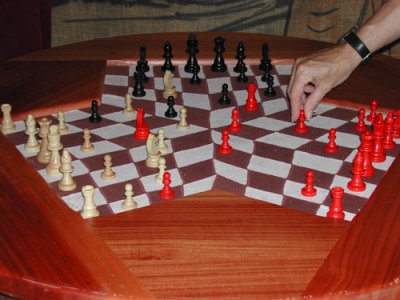 A different looking Yalta board from the French website charlestillou posted about below.
I too had a similar idea but never finalised the rules enough to post it. My idea was four ranks on the FIDE side, five each on the Shogi and XQ, FIDE facing each of the other two on four files, and Shogi facing XQ on five files. XQ would certainly move first.
Regarding variants with even numbers of both ranks and files I agree with the previous comment. Odd numbers of either are slightly more complex. Nine-file variant can however be adapted for 4 players with each facing each across 3 files, as in my Flyover Shogi and Flyover Xiang Qi.
I think, any game with symmetric initial setup can be played on such boards. Also it's possible to make boards not only for 3 players game, but for any number of player (with more squares: another 1 player - another 32 squares).
here is another kind of plate maybe better for some people it's up to you (so you can make it yourself according your favorite ways) mine is nearly the same as Daniel Lindstrvm's model

ps for moderate : i'am not a commercial and have no interrests of any kind in this sociéty it's just for example

during the game we speak very much for mental intoxication

rules are ending amazing cases and sometimes we scratch our heads

the most important thing the timing of actions when you're checked by the first,the second is free to attack any piece cause you should face to the check before but sometimes he must defend you to avoid mate,your worst ennemy for the king is always the first and the second is the queen's killer

it is at last an excellent game ,try it and you'll be addict (or crazy;-)

I discovered this beautiful game somewhere on a marketplace in Budapest. You can still buy it(2006)! It is a real challenge to play the game since there are all unexpected moves and possibilities. Moves of the bishop split up as they go though the center. I would like to have the original rules how to play the game properly. We play the game until two players are checkmated. We leave the pieces of the first loser on the board. Since they have no king, they have no effect. You can capture them if you like.
I last saw this game some 20 years ago, and may even have played it myself. There was also a 4-player version but this is even better as every pair of players is equally opposed to each other.
I suppose the name refers to the meeting of Roosevelt, Churchill, and Stalin in Yalta during World War II.
This game called Yalta like city in Crimea (Ukraina) or what?
Where can you get one of these chess boards? and is it called Yalta by everyone?