This is a variant that I put together while waiting to check online details for Man and Beast index poages. It was inspired by my Mitred Framing variants and how they made used of either FIDE and Shogi, Xiang Qi and Shogi, or promoted and unpromoted Shogi, physical sets. This one uses one set from each of the three standard games.

My first decision was that FIDE pieces always represent themselves. East Asian pieces, I decided, represent themselves only when they were neither single-step nor duplicates (not distinguishing leapers from steppers) of FIDE pieces. This gave the King/Queen, 2 each of Rook/Cannon/Bishop/Knight/Elephant/Wing/Helm, the last two both promotable to Gold, and 8 Pawns. For unused XQ pieces I drew on Yang Qi substitutions either straight - Ferzes as Arrows - or in reverse - Rooks as Dabbabas - before adding the compounds with General as Tank and Knights as Alibabas - two of these as they are bound. Unpromotable Shogi pieces I then used to similarly fill out the Knight famiily - King as Gnu, array Golds as Camels - and promotable ones the Wing and Helm families - Rook/Bishop as Princess/Handyman, both promotable to Prince, Silver/Point as Mitre/Hump, both promotable to Silver. Finally I decided to use the XQ Points as promotee Stewards. Promotion to Gold and Silver made up for these not being array pieces. 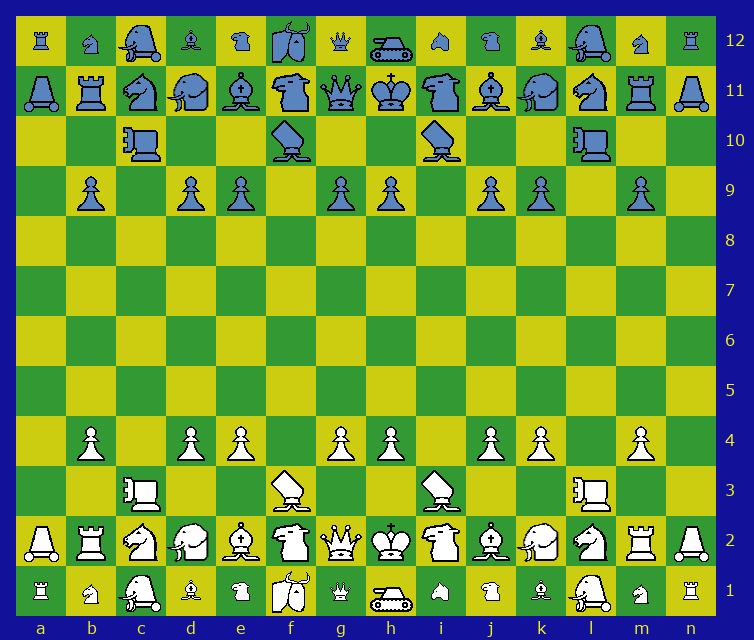 Promotion is as follows, by flipping the piece:

Castling involves the King moving three steps and the relevant Rook moving to the two-thirds square of the King's move.

Pawns entering, or moving within, the enemy camp can be promoted to a symmetric capturable piece captured by the enemy if there is one. If they reach the far rank promotion is compulsory, to the same kinds of pieces if there are any and to a Steward otherwise.

Other FO pieces entering, or moving within, the enemy camp can be promoted to the appropriate one-step piece. If they have no firther move unpromoted, promotion is compulsory. Note that the question of leaving the enemy camp unpromoted does not arise.

A player capturing an enemy FO piece, or its promoted form, can reintroduce it as part of their own army in place of a normal move. It must return in unpromoted form, on a square from which it has a valid move in that form.

Check, Checkmate, and Stalemate are as FIDE Chess. A player can also achieve a Machiavellian win by having all four Princes on the board (i.e. their own and the enemy's Princess and Handyman, all promoted), or an out-of-pieces win by moving a Pawn to the far rank when having a full array quota of symmetric pieces and five Stewards. Note that these last two wins cannot be countermanded by capturing a relevant piece.

Could this variant be extrapolated to other geometries? Having looked at it I would have to say not directly. The Knight+Camel=Gnu and Helm+Hump=Handyman patterns do not extrapolate well to hex boards, and while the triplet Knightwise-Sextonwise-Ninjawise might balance out the three radial directions on a cubic board a large set and two small sets for each standard game would not provide all seven kinds of piece in all six groups. What could however be extrapolated to hex boards would be a "mini-MiTaWi" with only long-range pieces including FO Cannon-style ones and no XQ sets. The square and hex versions could be as follows, with the hex one having the Grandduke Swap of Liu Yang to ensure coverage of all cells by all piece types.