Many 9-file variants arrange Bishops and Knights symmetrically. Among them are 4 Linepiece Fusion, Chancellor Chess, Football Chess, Kirby Chess, Kristensen's Chess, Modern Chess, Nine Squares Chess, Sissa Chess, Taijitu Qi, Ultrachess, and Yang Qi. As this leaves both a player's Bishops bound to the same-colour squares some means of unbinding them is often deployed - most ingeniously Yang Qi's King Swap. Corrugated Chess removes the need for that with a geometry in which the Bishop is intrinsically unbound: the bottom 2 levels of a Honeycomb Chess hex-prism board. It does however have the shortcoming of drastically reducing the Bishop's longest move in the usual way of 3d variants that are not extravagantly large (indeed I leave the "large" box unticked for though larger than the FIDE board this one is if anything small for 3d). Does this leave Bishop and Knight about equal? Not necessarily, as the Knight too is enhanced by no longer being colourswitching, but not in any way diminished. 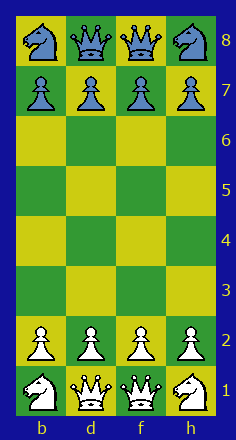 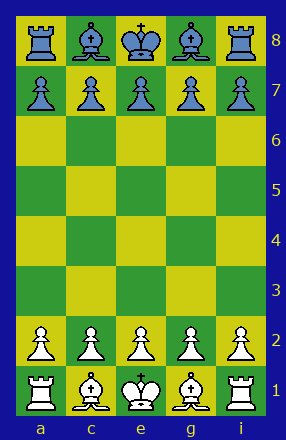 Pieces are as in FIDE Chess. As changing level is necessarily to an adjacent file a piece doing so must move within a rank if a Rook, move to an adjacent rank if a Bishop, do either if a Queen or King, move two ranks of a Knight, and capture if a Pawn.

Initial Pawn moves, En Passant, and promotion are as in FIDE Chess.

There is no Castling as the geometry takes the King's Kingside and Rook's Queenside moves out of the pieces' intrinsic directions. The King can reach its Queenside destination by a normal move anyway. There is no Yang Qi King swap either as its Bishop-unbinding quality is not required.

Clearly any game played with a FIDE array can also be played with this one, but its principle can also be applied to variants with other arrays. Unless otherwise specified the outermost files are Rook files each with a Bishop (B), Elephant (E), or Silvergeneral (S) file beside it and a Knight file above the two.

On the one hand it can be applied to even-file variants, again putting the King file centre-stage and duplicating the other middle file. Makruk (S) is an obvious example. Chaturanga (E) might seem another but the result binds Elephants to four-square zigzags on the lower level only. For Knighted-piece variants it is consistent to also duplicate those pieces' files to give 13 files, addimg Marshal and Cardinal files to the 9 files of the main variant. A Carrera version could add Marshal files at the side of the upper level and Cardinal files between the Rook and Knight ones, a Bird version Marshal files between King and Bishop ones and Cardinal files between the Queen and Knight ones. Castling could be reintroduced, with pieces moving two steps toward each other. A corrugated Grand/Grander Chess would lengthen the latter board to ten files with Rooks further back than other main pieces. A corrugated Eurasian Chess could substitute a Tank for the second Queen, to complete the match between linepieces and Hopping-capture pieces. Likewise a corrugated Ecumenical Chess, which also unbinds Camels, could have one of each compound piece aside, Caliph and all. The upper level could be Knight-Camel-Cardinal-King-Canvasser-Camel-Knight and the lower Rook-Bishop-Gnu-Marshal-Queen-Caliph-Bishop-Rook.

On the other a board already having an odd number of files can be corrugated. A corrugated Yang Qi or Taijitu Qi (both B) requires no King Swap but level changes by both Arrows and Cannons can only be noncapturing. A corrugated non-citadel Timur's Chess (main pieces on 2nd ranks, B minus single step) unbinds (but leaves rankswitching) the Ferz and Camel but the Dabbaba and Elephant fall foul of the same problem as with Chaturanga above. Likewise Xiang Qi (E) and Taijitu Qi (B) with a slightly different Elephant. In the case of Bachelor Chess, Wildebeest Chess, and my own Bachelor Kamil which combines their themes, files can be rearranged to be symmetric (B). For Shogi (Forward only pieces in corners, S) it unbinds the second-rank single Bishop, but given that on the square board it can be promoted and/or return from capture on the other binding this is less significant than would be otherwise.

There seems little to be gained in using the hex or hybrid diagonal, or hex-specific oblique leaps, in these games. Adding new piece types for these directions would detract from the simplicity of each variant sa a modification to the relevant game, and hex Shogi generals would be particularly unintuitive. Adding the moves to existing pieces would also require explanation beyond the obvious.