Grand Chess is a variant invented by Dutch game designer Christian Freeling in 1984. It expanded Chess to a 10x10 board and, like Capablanca's Chess, adds two compound pieces that Chess is missing: a Rook/Knight compound and a Bishop/Knight compound.

Grand Chess has attained a level of notoriety that is rare for a Chess variant. It has been featured in a number of books and periodicals, including:

Grand Chess has also been featured in tournaments. Many of the participants of the 1996 Chess Olympiad in Armenia joined together to form an unofficial Freeling Grand Chess tournament. A series of Grand Chess Cyber World Championship matches was sponsored by Mindsports, Christian Freeling's strategy game website. It was also included in the first and second Game Courier tournaments on this site. 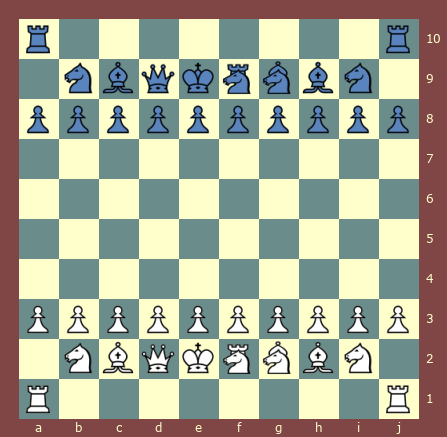 The Marshall has the combined moves of Rook and Knight.

The Cardinal has the combined moves of Bishop and Knight.

All other pieces are as in Orthodox Chess.

Mindsports: You can play against other players or a simple AI on Christian Freeling's Mindsports website.

Very nice wooden Grand Chess sets can be purchased at the Mindsports website. You can also purchase Cardinal and Marshall pieces (called Archbishop and Chancellor) from the House of Staunton. Search for Musketeer Chess. Using this link for your purchase will result in a small donation to the Chess Variant Pages.

The pawn promotion rule is unusual in two ways. The promotion on the 8th rank, rather than the 10th rank, mirrors Mecklenbeck chess, invented in 1973. It is certainly possible, however, that Freeling was unaware of this and came up with the idea independently. After all, on the deeper board, it may have made sense to allow the pawns to promote early so that they would not have to travel farther. That said, in orthodox Chess, pawns start on the 2nd rank and promote on the 8th, so they must make six steps (or five if they make an initial double move). In Grand Chess, they start on the third and promote on the eigth, so they only have to make five steps, or four if they make in initial double-move. So, relatively speaking, they can promote sooner. But does that make them more powerful? That is not clear, as there are more powerful pieces with which to stop them, and more space around the edge for the pieces to maneuver. But what is clear, however, is that this change has a definite effect on endgames. In Chess, in a KPK endgame, the weak side has something to play for. If the strong side does not play correctly, it can be a stalemate. And some KPK positions are not won even with perfect play. With the pawns promoting before the last rank, however, KPK is always won if the king is close enough to the pawn to prevent it from being captured.

The other major promotion change is that pawns may promote to only those pieces that are captured. So, you can never have more of any type of piece than you start with. For over-the-board play, this does make things somewhat simpler, as you do not need extra pieces, nor do you need to turn a Rook upside-down or the like to simulate the extra piece. But there are many players who do not like this rule, and it is true that over-the-board play is becoming less common, while computer/online play does not have this issue.

As expected of such a popular variant, Grand Chess has spawned variants of its own. Kevin Scanlon created Grander Chess, making a couple of tweaks, most notably to the promotion rules. Greg Strong created Opulent Chess to add additional minor pieces to adjust for the decreased board-piece density.