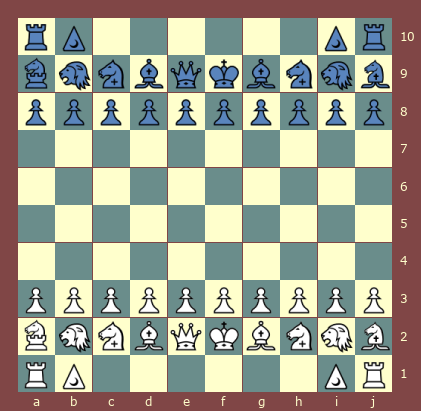 The Movement column describes the moves in Betza Notation.
The Average Mobility score is a Betza Mobility Calculation with a magic number of 0.7

The name: As the game is similar to Grand Chess, and I had no better ideas, I just selected a synonym for "grand." Other synonyms, like "Ostentatious Chess", were less pleasing :)

The number 10: This game was an entry in the contest to design a 10-chess variant which was held to celebrate the 10th aniversary of the Chess Variant Pages. The contest objective was to design a chess variant prominently featuring the number 10. Opulent Chess features 10 different types of pieces on a board with 10 ranks and 10 files. For another contest entry that chose to use 10 piece types on a 10x10, see TenCubed Chess.

Opening setup: I believe the opening arrangement of pieces is very important to making a game that plays well. This array is the result of extensive computer analysis.

NOTE: This is not the original array. Originally the Knights and Bishops were reversed. That was also the result of computer analysis. At the time, I tested this array also and expected it to be better, but it did not test that way. But now my software, as well as the computational power available to me, has greatly increased since it was originally tested in 2005.

Computer Play: Opulent Chess is fully supported by ChessV, a free open-source program for playing chess variants. You can also play Opulent Chess if you have a registered version of Zillions-of-Games installed on your Computer. You can Download the ZRF file here.

Play Online: Opulent Chess can be played on this site with Game Courier. A selection of fully automated, rule-enforcing presets can be found here. You can also view games that have previously been played on Game Courier here.

Intellectual Property Rights: Anyone is free to make use of Opulent Chess for any purpose, including commercial purposes. The only limitation is that the name may not be changed, and Greg Strong must be given credit for the invention.