It has been written:

"Atlantis was a city, island, and culture with many facets. The old and new nobility, along with the members of the merchant class with both wealth and aspirations, played Great Shatranj, a sedate, traditional old game. The young people, the intellectuals and artists, and the non-wealthy members of the merchant class played Grand Shatranj. This game is a bit more lively, with longer-range, more powerful pieces and more territory, but still maintaining a strong connection to the older Great Shatranj. It was the lower classes, the drinkers, poets, bards, craftsmen and clerks, sailors and servants, who evolved a game with a little life in it. All around Atlantis, in inns and low dives, Barroom shatranj was played, ..."

What is not mentioned is the game of choice of the Atlantean middle-order academic, cleric and clerical strata: the lecturers, readers and senior students in the Halls of Learning; the recorders, prosecuters, and advocates of the Halls of Justice; the bureaucrats, secretaries and scribes from the Central City Hall and Outlying District Halls; and the ecclesiastics, clergy and acolytes in their Halls of Devotion.Â  These sober citizens frequented the many Coffee Houses to be found in the better districts where they indulged their passion for a Shatranj played on a board constructed from 127 hexagons.

The starting position is shown in the following image: 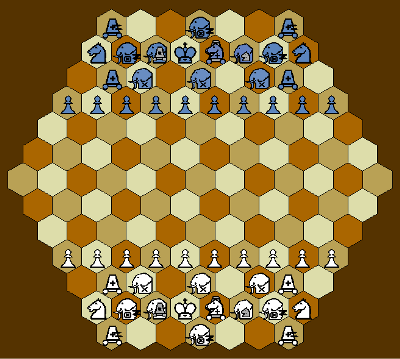 The pieces are all bar one those found in the square-celled shatranj variants with their movement adapted to hexagonal cells. Unless stated otherwise the legal moves for a piece are shown in the images below by grey dots.. Each player starts the game with 1 King, 1 Jumping General, 1 Minister. 1 High Priestess, 2 War Machines, 2 Battle Engines, 2 Knights, 3 Elephants, 3 Tuskers, and 10 Pawns.

Win by checkmate or by baring the opponent's king without your king immediately being bared by your opponent. Any other outcome is a draw.

Capture is by replacement. A capturing piece must stop on the cell of the piece captured.

The pieces and their movement are detailed above

I like the concept of the short-range project and feel that though the Shatranj variants of the Atlantean and Lemurian mythos may not provide the Next Chess, they certainly offer highly playable and worthy candidates for an Alternate Reality Chess

The only things they lacked were two-sides per cell. A shortfall I have attempted to correct with this addition to the Atlantean Shatranj family.

An alternative name for this variant might be Grand Hexagonal Shatranj since the pieces are hex equivalents of those found in Grand Shatranj. The one exception is the Tusker which replaces the Oliphant. I felt that because of the geometry of the hexagonal board the Oliphant became a tad long-range.

I therefore reduced its maximum move to 3 cells and added a twist. The resullting pattern of legal moves is a diagonal reflection of that for the Minister.