Except for pawns, in this game all of the piece types move symmetrically, reaching 8 squares in the middle of an empty board. That's with all of the piece types making all of their possible moves within a 1 or 2 square radius. Because the 9 piece types I've chosen are all short range (like a number of those in Shatranj), and since I chose a 10x10 board to accommodate the number of piece types I wished to have, I decided that it would help to have more than one King per side in the setup position. This is so that games might not take too many moves to play on average. I soon decided to have 4 Kings per side, with the condition that if a player cannot get out of one or more checks to any of his Kings during a game then he loses, by checkmate.

A Game Courier preset for play is available. Note that a link about Shatranj is given in the Notes section further below. 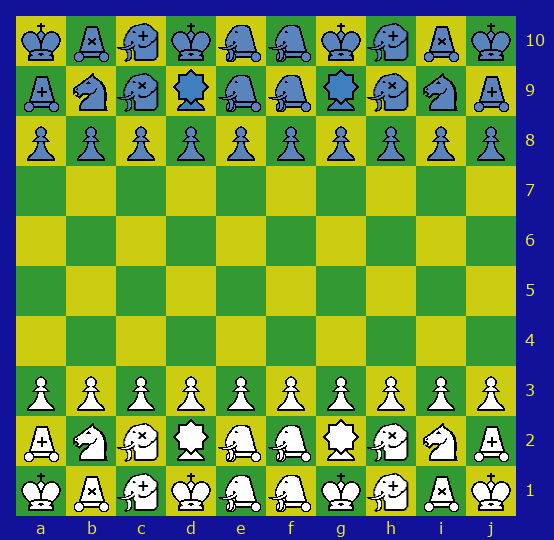 In this game there are 9 piece types (all short range), including 3 types from standard chess (i.e. Pawns, Knights and Kings). All of the other 6 types are compound pieces (with names as per wikipedia; link provided in Notes section further below):

Modern Elephant: leaps like an alfil or ferz (1,1), that is leaps 2 squares diagonally or 1 square diagonally - note that this piece type is colour-bound;

Waffle: leaps like an alfil or wazir (0,1), that is leaps 2 squares diagonally or 1 square orthogonally;

Kirin: leaps like a dabbaba or ferz, that is leaps 2 squares orthogonally or 1 square diagonally - note that this piece type is colour-bound;

Wazaba: leaps like a dabbaba or wazir, that is leaps 2 squares orthogonally or 1 square orthogonally;

Guard: moves like a King, that is like a ferz or wazir, i.e. 1 square diagonally or 1 square orthogonally {aka mann}.

A player wins if any of the opponent's Kings are checkmated. Note that if 2 or more of a player's Kings are in check, and not all of these can get out of check with any single next move by the player, that player is effectively checkmated.

If a player ever lacks legal moves, but none of his Kings are in check, then this is a stalemate, and the game is drawn.

Pawns move as in standard chess (i.e. an initial double step move and en passant captures are allowed), and in this variant may promote on the last rank to any of the piece types in the setup, except for King.

There is no castling.

I'd estimate the piece values to be as follows:

Regarding strategy, controlling the centre of the board ought to be advantageous normally, as is common for chess variants.

The Kings are about as safe where they are located in the setup as they're going to be for a long time (no lone piece but a Wazaba moving to the last rank could hope to check more than one King with a single move, if the Kings stay on their setup squares).

A Guard or (less often effectively) a Wazaba are the only piece types in this variant that can hope to alone, but for the assistance of just a lone friendly King, checkmate an isolated (single) enemy King on an edge of the board.

As in chess, pieces shouldn't be moved to squares where they are liable to be exposed to convenient attack by less valuable enemy pieces or pawns, if that then compels them to go to undesirable squares, or waste tempi due to retreating.

Here's a page about Shatranj: Shatranj