Isn't it a bit strange that we rely on (old and disagreeing) western sources, while in this age of the internet it should be easy to get feedback directly from Korean players? Discussing disagreements between Gollon, Murray and Pritchard might be interesting in an article reviewing their books, but mistakes they might have made do not deserve to be mentioned in a rule description of the game. I never mention the 'Murray Lion' in the Chu Shogi article...

The Fairy-Stockfish developer has included Janggi in his engine now, and claims to have received a lot of feedback during its implementation from Korean amateur and pro Janggi players. I believe him. Which means I consider the current rule implementation in Stockfish to be reliable. Notable point in this are:

So there are actually four sub-variants, bepending on application of Bikjang and point-counting rule.

It also seems wrong to describe Bikjang as "the Generals checking each other". Check is an imminent loss because of King capture. There is neither loss or King capture here, just a draw offer that can be accepted or declined. The whole idea that King facing is a check seems to be contamination by Xiangqi concepts.

I have just uploaded a major update to this page. While there is still more work to do on it, it seems to be in a mature enough state to replace the previous page.

I just compared this page with Roleigh Martin's article, highlighting any text I found to be the same. It looks like Martin is the principle author of this page, despite his distribution policy that his article should not be altered. I have a new version of this page in the works, which I'll replace this page with when it is in a more finished state.

While it is plausible that Koreans, or in this case Sillans, originally played the game with Chinese equipment, Hwarang was not a drama that made any effort to be historically accurate. Using a board with a river might have just been an oversight in the production of the show.

These are the values given on wikipedia for the piece values in this game. To me the cannon seems way overrated here. For obvious reasons it should be weaker than it's xiangqi counterpart. In this gmae as I see things the horse should worth a cannon+soldier, maybe a bit less but not the other way around. Maybe this elephant is on par with the Jangg cannon. Am i missing something? Or can I  find more reliable data?

There's a reason this regional game has lasted for so long. Perhaps it's even a Classic by CVP standards.

I notice that the board has a river like xiangqi. Â Would I be correct to think that janggi had this board feature in the past but developed a board without it, or is this another anachronism (or mistake)? Â These are nice images that you posted, so thank you.

Here are a couple images of Janggi being played in the Korean historical drama Hwarang, which takes place in ancient Silla around 1500 years ago. This does not mean the game is actually that old. Characters in this drama can also be seen playing soccer. The woman is the queen dowager, who is serving as regent for her son, who is the king. The man is in charge of forming the Hwarang organization. 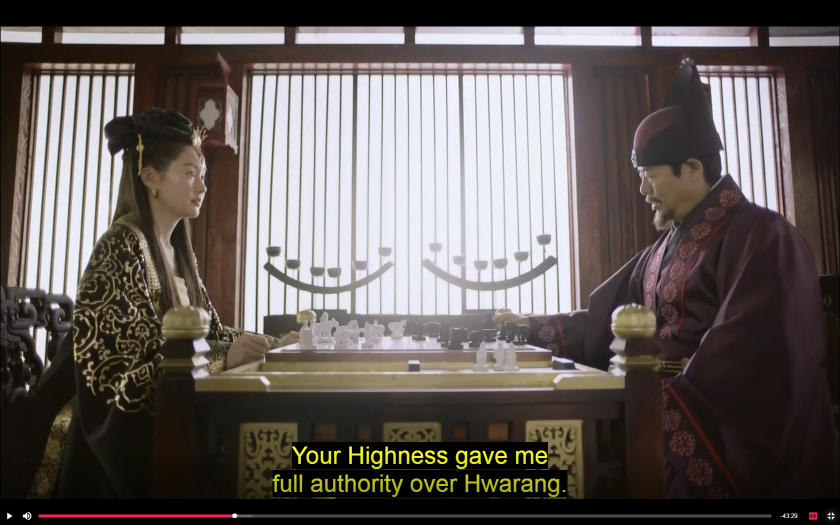 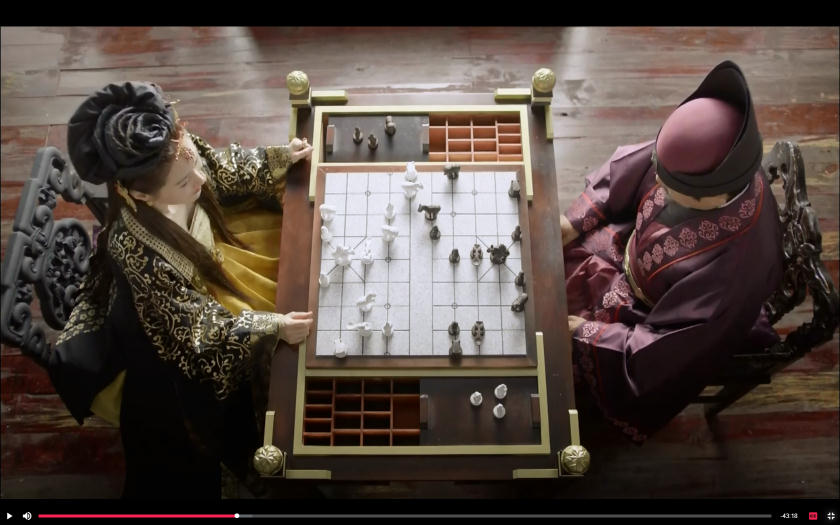 How do I swap the knight and elephan at the beginning of the game?

By intuition, the promotion of soldier can affect the strategies of the game drastically. Soldiers would not be sacrificed easily, and exchange of chariots or horses would be played more positively.

Also by intuition, I think the move order gives too much advantage to Chu (the green or blue) who make her setup according to Han's setup and move first.

A simple Google traduction of the page given by Yu Ren Dong about promotion in Janggi played in Tokyo gives the following: Experimental implementation 2005/5/13 ~ Local rules for new Tokyo branch (in addition to the existing Official Rules)

Here are a couple pictures of Janggi being played in the Korean drama God of War: 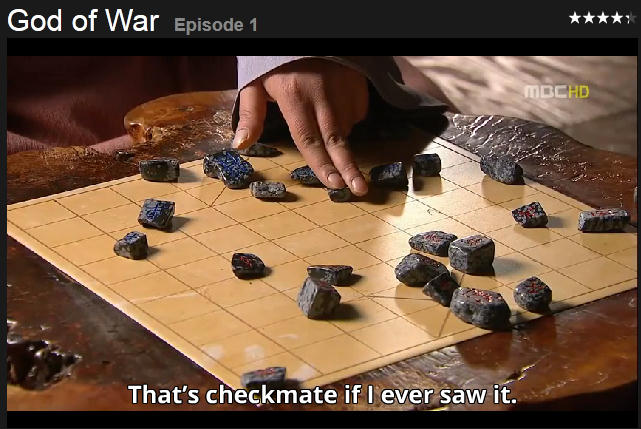 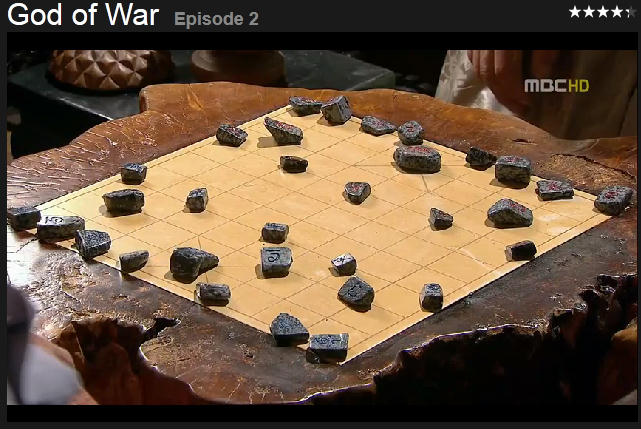 The series takes place in the 1200's during the lifetime of Ghenghis Kahn. I have been watching Korean historical dramas in chronological order, and this is the earliest setting I have seen Janggi appear in. Despite the subtitle in the first image, it is not a checkmate just yet. Red subsequently moved the piece in the top corner of his palace as an Elephant, and Blue made another move. In the second picture, Blue has just moved his Horse at the beginning of the game.

I can't read Japanese, but I saw some diagrams that showed Pawn promotions. Since this comes from Japan, not Korea, and this is the first time I've heard of this rule, I'm going to assume it's a Japanese amendment to the rules and not part of the official Korean rules. If you know that Koreans also play by this rule, please report what you know about it.