My first game combined shogi with chess. Now one step further: A game combining chess with shogi and xiangqi. The object is to checkmate the opponent's king. 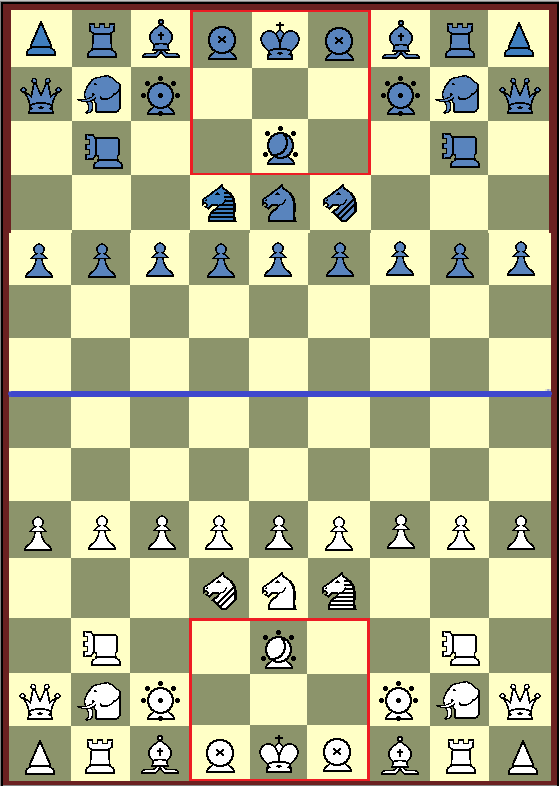 All pieces exist in one, two or all of the three games.

Note that all pieces are same colour. Only their direction tells which player a piece belongs to.

ADVISOR, moves as a ferz, i.e. one squere diagonally. It may not leave the fortress and can't promote.

ELEPHANT, jumps two squeres diagonally. It is like in xiangqi but can jump in this game. The elephant can't pass the river (the border between the two middle rows) ant cannot promote.

CANNON, moves as a rook without capturing. In order to capture, cannons must jump over a piece of either colour, landing on a squere occupied by an enemy piece, capturing it. This is the same as xiangqi cannons. They do not promote.

SILVER, moves one squere diagonally or one squere orthogonally forwards. Promotes to gold.

GOLD, moves one squere orthogonally (like a wazir) or one squere diagonally forwards. Doesn't promote.

LANCE, moves as rook but only forwards. Promotes to rook.

HELMET, moves to the two forwardnost squeres a knight can reach. Promotes to knight.

MAO, moves as a knight but can't jump. It moves first one squere orthogonally and then one squere diagonally in the same direction. Promotes to knight.

BISHOP, moves as in chess. Promotes to (dragon)horse/pegasus.

ROOK, moves like in orthodox chess. Promotes to dragon(king).

QUEEN, moves like in chess and does not promote.

DRAGONHORSE, HORSE or PEGASUS, moves like a bishop or as a king. It is non-royal. Since this is a promoted-only piece it can't promote.

DRAGONKING or just DRAGON, moves as a rook or a king. Non-royal. Since this is a promoted-only piece it cannot promote.

5. Two kings cannot face each other on an open file. For example, a white king on e1 and a black king on e14, with no piece on the e-file between them, is an illegal position. If either king sits exposed on an open file, the other king may not move to occupy that file.

7. Perpetual check is forbidden. You cannot check your opponent more than three times in a row with the same piece and same board positions.

10. Captive drops are performed as follows... a. A captured piece may be dropped onto the board (placed on a vacant square) to subsequently be used as one's own. This is done in lieu of a regular move. b. No piece may be dropped to a square from which it is impossible to move. [e.g., a lance to the 14th rank; a helmet to the 13th or 14th rank.] c. A checkmate may not be performed by the drop of a Pawn. A King may be checked by dropping a Pawn, but only if the drop does not result in an immediate checkmate. d. Elephants may not be dropped on the opponent's half of the board. e. Advisors are removed from play upon capture.