Once More, with Deans

The idea for this group of games began with a consideration that I might use the Dean as a distinctive piece type in my themed variant Great Stour in the belief that deans would have more power/work in a diocese whose bishop had a lot more calls on his time than in most. Research revealed this belief to be false, it was in fact suffragan bishops who took up the slack, so I used the Bishop piece to represent them there. Deans proved to be nothing more there than at any other cathedral, and were not represented in any other of my River variants. Then I wondered, why not?

The Dean in Terry Pratchett's Discworld series may also have been an influence. His title is in fact based on an academic one, meaning the leading professor of a faculty at certain British universities. It would have been tempting to create a variant set in the Dean's fictional home city of Ankh-Morpork, as it had the requisite river (the Ankh) and prominent academic and religious leaders in the form of the Ridcully brothers. I could even imagine pieces to suit their respective titles of archchancellor (Rook plus Knight plus Ferz) and high priest of Blind Io (Bishop plus sideways and backward - but not forward - Wazir). In the end, however, I decided to restrict my variants to real-world localities. The title of this page does however retain a Pratchett link as it alludes to Once More, with Footnotes, a collection of short stories, articles, and other writings of his over the years. The book title in turn alludes to both his inveterate use of footnotes and the cry "Once more, with feeling", the refrain of directors throughout the performing arts after a lacklustre rehearsal. I also decided to stick to using Deans specifically in the ecclesiastic sense for three reasons.

Firstly, it was in this sense that I had named the piece in question in Man and Beast 06: The Heavy Brigade - alongside the Evangelist and Monsignor - as enhancements of the Picket, a Timur's Chess piece with nearly-but-not-quite the Bishop's move. Since then I have used a religious theme for hex-prism-specific pieces of this kind in Man and Beast 17: Hex Heavies - Quaker, Jesuit, and Copt.

Secondly, the title is far from universal among universities even in Britain. There are some universities represented where I do not know whether or not it is used.

Thirdly, I simply did not want to confuse the theme by having the same piece represent two different institutions.

I decided to make the Deans Stepping ones as Leaping ones (1) seemed incongruous to the theme and (2) would be too strong. In each case I have one bound to dark and one to pale squares, just as Bishops and (in Great Stour) Boars are balanecd between the two bindings. This "pair of Deans" could also be seen to reflect Pratchett's Dean character, and his forays into denim wear in Soul Music. They are added in four ways, all placing them near the Bishops whose subordinates they represent. These ways are:
* by substituting Deans for the Pawns immediately in front of the Bishops (Aire);
* by substituting Deans for pieces peripheral to the theme and flanking the Bishops (Avon's Carpenters, and CoBlaChe's Frogs);
* by inserting Deans in existing empty squares immediately in front of the Bishops (Cam, Irwell);
* by pushing Pawns forward a rank and inserting Deans immediately in front of the Bishops (Great Stour's middle four Pawns, Isis, Wey). In the last I also add two array pieces of the existing promotee type to avoid a loss of symmetry.

Most variants have a River between the middle ranks. Multiple stretches of River divide Cam into three blocks - a-f 1-4, a-f 5-8, and g-j 3-6 - and CoBlaChe into 4 blocks of 4 ranks each. 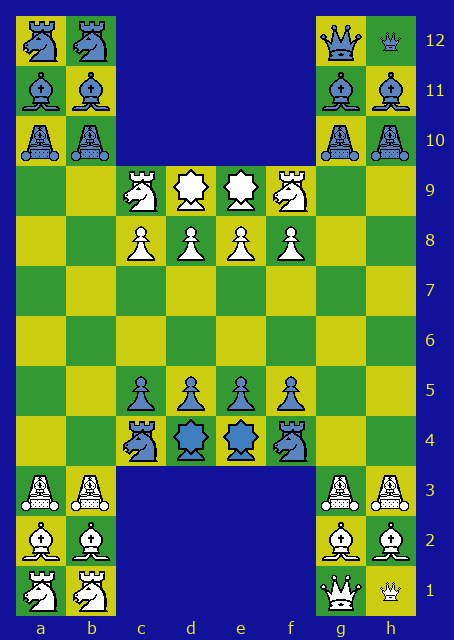 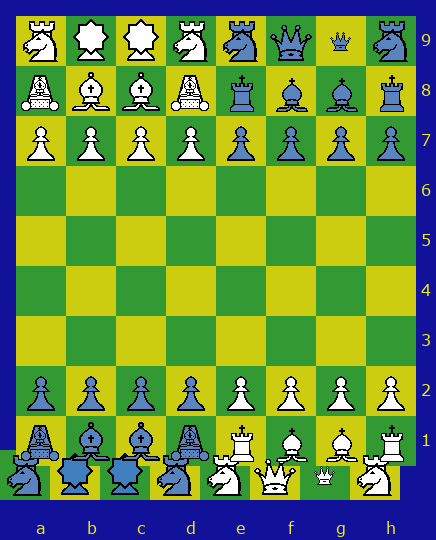 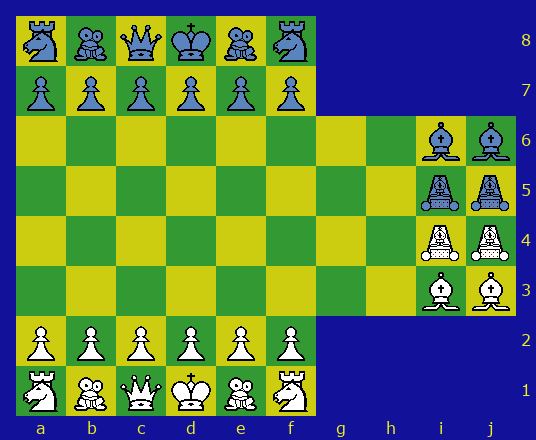 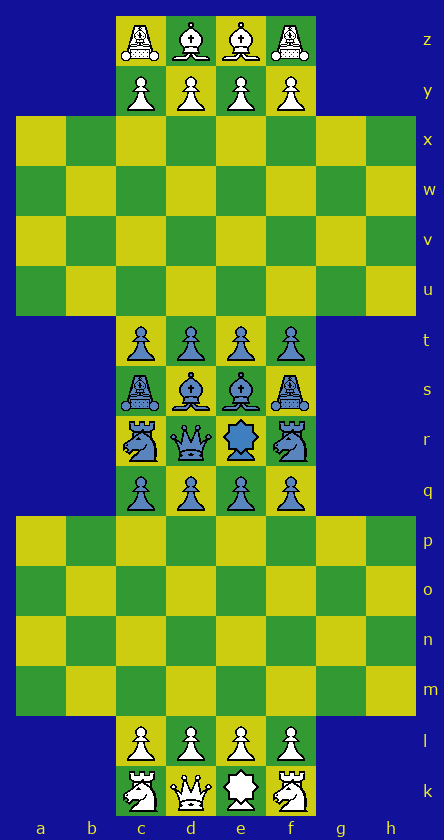 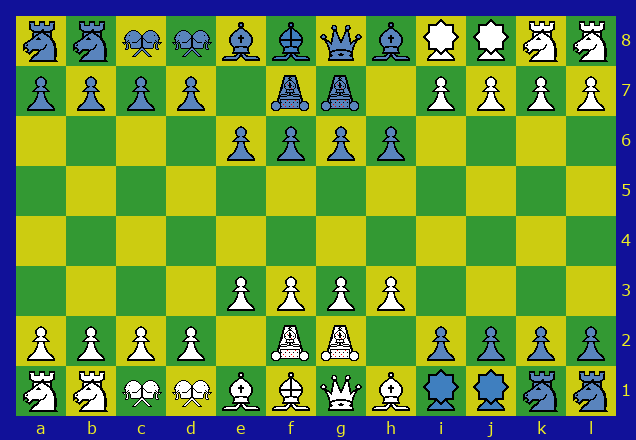 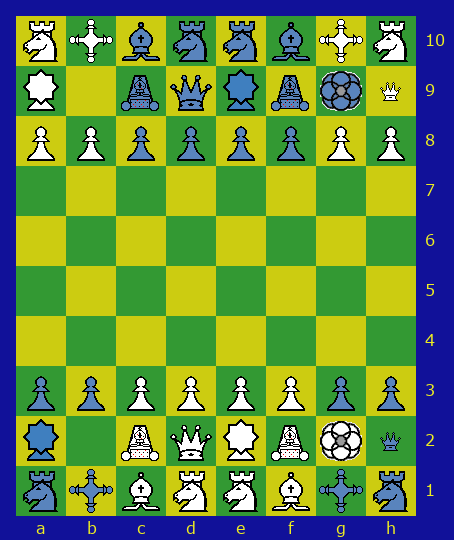 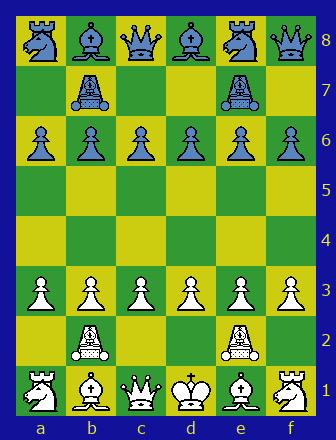 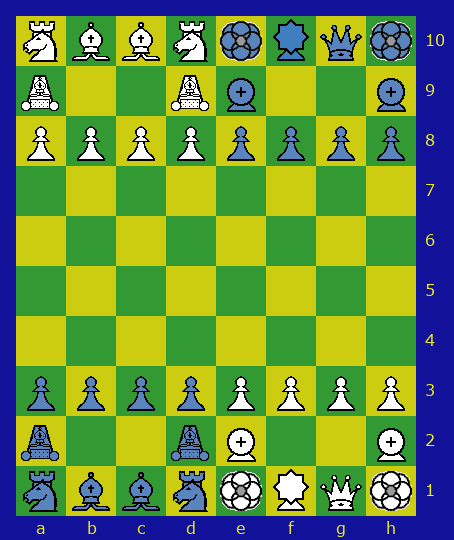 Pieces common to all variants:

Pieces specific to groups of variants:

In Aire and CoBlaChe a Knight move, and each step of a diagonal move (though not necessarily the entire move), must be made within a solid block of squares with none missing. For example a Queen or Bishop may move dl-cm-bn but not cl-bm.

There is no initial double-step move or En Passant. Unpromoted Pawns are barred from capturing unpromoted enemy Pawns moving in the same directions.

A Pawn crossing any River section is promoted to Wazir, Sow, or Steward depending on variant. It remains promoted even if it retreats back across the River. In Aire a Steward reaching any of the four corner squares, it can be further promoted to a Rose, with the restriction that a team can have only one Rose at any time. When an Aire or Irwell player whose team has a Rose moves it, it cannot be moved again until that player and, if still in the game, their partner have each moved another piece.

In Irwell Coronation occurs when a move ends with a Prince the only piece between a Bishop and a Steward along a diagonal, or on the edge with one unblocked diagonal to a Bishop and the other to a Steward, regardless of colour, results in Coronation. The Prince becomes a familiar KING, and must thereafter be kept out of Check. A player cannot end a move with a Coronation of one of their own Princes involving an enemy Bishop or adjacent enemy Steward, as this would be moving into Check. Checkmate and Stalemate then become further ways of a game ending. Theoretically a move can end in two Coronations, of opposite-colour or same-colour Princes. An army both of whose Princes undergo Coronation, either simultaneously or in separate moves, is also defeated as it is judged too unstable with two rival claimants to kingship! Once captured, a Prince cannot undergo Coronation but its absence may cause the army's players other problems.

In variants with a King - either in the array or by Cornation - Check, Checkmate, and Stalemate are as usual.

In Great Stour a player with no legal move loses.

In 4-player variants a player with no legal move drops out of the game. All that player's turns are subsequently missed. Their partner, if still in the game, gains total control of the army with the Princess becoming a Queen and any remaining unpromoted Pawns Stewards. This strengthening is some compensation for the army moving only half as often as before. All their Pawns are then promoted to the relevant promotee, and in Avon Abbots and Caryatids are promoted to Primates and Chatelaines. The game ends when both an army's players drop out of the game. 4-player variants can be played with varying amounts of communication allowed between partners. For example, you might allow an opinion to be expressed on a partner's initial proposal for a move but not on any change of mind. It can also be played with wins and losses for teams or individual players. In the latter case the player whose move ends the game ranks first and the first player to drop out fourth. Two players still playing an army when Checkmated score joint third if the other two players are still playing, otherwise joint second.

Most of these variants can be represemted by 2 distinguishable FIDE sets, some using spare Knights as Deans. However it has occurred to me that it would be useful to have a single system of representation across all variants of the series, with or without Deans, in which a given piece type is always represented the same way. I soon realised that the most efficient way to achieve this was with Shogi physical pieces, to give enough types of piece. I suggest the following convention: Aire, Avon, Great Stour, and Irwell require 2 sets per game. Cam, CoBlaChe, and Isis require 1 set per game. Wey with Deans requires 2 sets and without Deans 1 set.