I'm a Wazir, Get Me Out of Here

Should there ever be a contest for the least tastefully themed variant, this will be a serious contender - to the point that the full explanation of the name seems to have been censored. As a game it mixes elements of Anglis Qi, Draughts, and Trapdoor Chess. Given my record with heavily theme-driven variants it might not be spectacular, but it has a certain simplicity which might give it potential beyond the usual Chess-Variant clique. 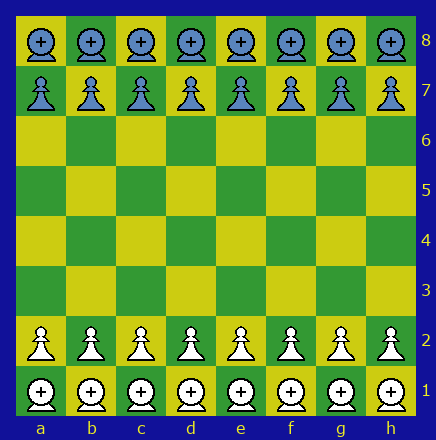 There are two kinds of piece: the PAWN, which moves exactly as in FIDE Chess, and the WAZIR, which moves one cell in any orthogonal direction.

Pawns inherit the FIDE double-step move and En Passant rule. A Pawn reaching the far rank is promoted to a Wazir.

A Wazir arriving in the central quarter of the board (between c3, f3, c6, and f6 inclusive) and then spending five moves by each player there without moving out of that area again in between disappears. Unpromoted Pawns are unaffected by the central quarter.

The winner is the first player to end a move as the only player with Wazirs. Note that the game ends at that point and the other player therefore cannot hang on by promoting a Pawn or force a draw by capturing the last Wazir of all. Draws are only possible by agreement or by a game obviously impossible to win - if any such situation exists.

This variant might best be played with stackable pieces such as those used in Draughts. Use one for a Pawn and two for a Wazir, but at the end of each player's move remove any stacks of six and add an extra one to any of their Wazirs in the central quarter that haven't just moved there. A Wazir leaving the central quarter will be restored to its basic height of two.