The spark for this game came from recent (Jan. 2008) comments in the Parlour Chess topic.

In particular this quote by Sam Trenholme


I think the problem with Chess as a social game is that there isn't enough luck in the game. 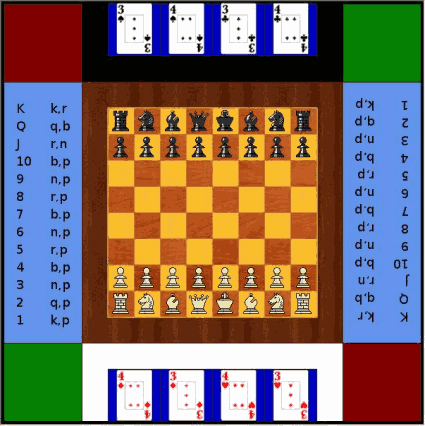 The game is played with a standard FIDE chess-set and a standard pack of 52 playing cards.

The starting position is shown in the image on right.Â  The chess pieces and board are setup as in FIDE chess.

The pack of cards is divided into two half-packs, Black having the Clubs and Spades while White has the Diamonds and Hearts.Â  Each player takes the threes and fours from their half-pack and places them face-up next to the nearest edge of the chessboard.

These 4 cards form the player's "hand".

The remaining cards in each player's half-pack are shuffled and placed face-down to form that player's "draw-deck".

A player's turn involves 3 actions performed in the following order:

1.Â  Take a card from the "hand" and place it face-up on the "discard-pile".
2. Move a chess-piece that corresponds with the card just discarded.
3. Take the top card from the "draw-deck" and add it, face-up, to the "hand" thus replacing the discard.Â Â

The pieces are those for standard FIDE chess.

There are two players.
A player wins by capturing the enemy King or by stalemating their opponent.
Turns, consisting of the three ordered actions (discard, move, draw), alternate between the players with White going first.
Normal FIDE rules apply to the movement of the pieces except for the King which is not restricted by considerations of safety and may be left in or be moved into check.Â  Likewise when castling, the King may start, finish, or be moved through check.

The correspondence between the discard and the piece to be moved is as follows, with each discard providing a choice between two pieces:

I believe Ideal Chess introduces sufficient but not inordinate luck into the game of chess.Â  However others may disagree and may wish to adjust the quantum of luck in one or more of these ways:

1. Vary the size of the hand
2. Have the top card in the draw-deck face-up
3. Divide the half-packs into their suits to provide two draw-decks, top card face-up, from which to choose
4. Add a Joker to each draw-deck as a wild-card
5. Use multiple packs of cards

Also, without affecting the luck, the normal FIDE rules for checks and checkmate might be used, though I feel a stalemated player should still lose.