This page is written by the game's inventor, Aurelian Florea. 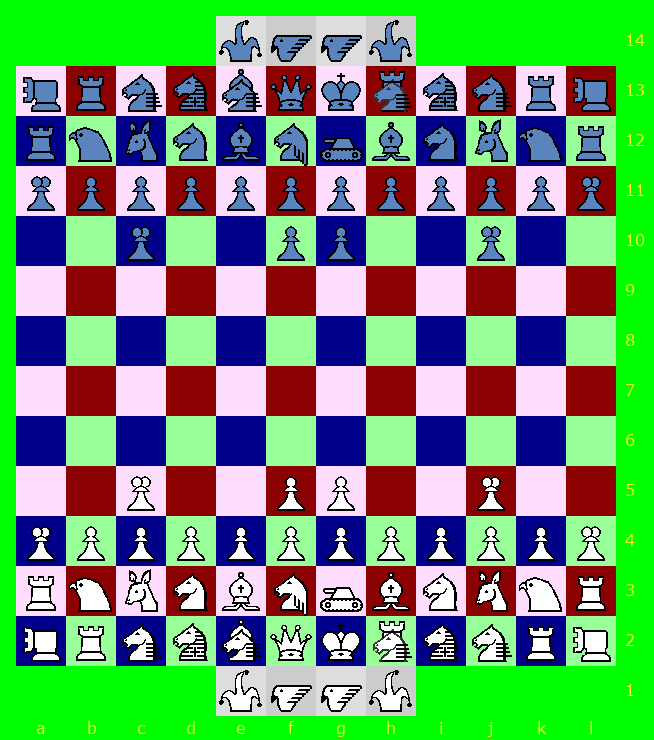 The Pawn moves like an orthodox pawn. It can promote at the furthest 3 ranks for each player. On the rank closest to the player it promotes to either bishop, knight, cannon,  kangaroo or warlock. On the next rank the pawn can also promote to rook, joker, knightrider, vulture or osprey. At the furthest rank the pawn may also promote to queen, Varan, unicorn, mortar, Valkyrie. Also, in order to promote, the player must have the required piece in reserve. In reserve enter all lost pieces by the player allong with (from the beginning of the game) 1 queen, 1 rook, 1 knightrider, 2 bishops, 1 knight and 1 kangaroo.

The Queen  is an orthodox chess queen.

The Varan is a knightrider+rook compound piece.

The unicorn is a knightrider+ bishop compound piece.

The Valkyrie is a bishop+ vulture compound piece (the vulture is a 41&43 path mover which can also jump 3 squarez orthogonally without capturing).

The osprey is a bent rider. Starts as a dabbabah and then continues towards outside like a bishop.

The Vulture is a path mover akin to the falcon piece in falcon chess, but it's destinations are the 41&43 squares away from the piece. It may also jump withouth capturing 3 squarez orthogonally.

The knight moves and captures like a regular knight but it can also move (but not capture) with a camel (3,1) leap

The kangaroo step one step diagonally or jumps 2 or 3 steps orthogonally.

The Warlock steps one step orthogonally or jumps like a zebra (3,2). .

1.Heavy Pieces: Queen, Varan, Unicorn, Mortar and Valkyrie - they worth 9 points in the points count.

2.Average Pieces: Vulture, Rook, Knightrider and Osprey- they worth 6 points in the points count

4. Light pieces: Bishop, Knight, Cannon, Warlock and Kangaroo - they worth 3 points in the points count

In this game there are 4 different castling moves for each side of the king.