Okay, thanks for the winning stats Dave!

The figures P=1, B=3, N=4, R=5, Q=9 for Glinski's were ones I saw that came on a paper inside a tube for Glinski's, when I used to own a set. It also had a picture of several tables of players playing Glinski's (on physical boards). I discussed the values a bit in an old email to Tim O'Lena, as I tend to agree with them - they also avoid situations where a Q plus piece is worth less than 2 Rs, which seems to make sense.

These days I'm an aging Canadian national chess master (title, no longer rating), with only a Candidate Master FIDE rating nowadays. I had 2400 Canadian ratings briefly about 10 years ago, and a provisional USCF rating of 2400+ back in 1981 after a 9 round Pan Am college team event in NYC - for some reason a team mate registered me as Kev Pacey, perhaps to try to be kind in case I were to play in USCF events later, but I would have thought an organizer there would put 2 and 2 together in that case.

Regarding N+B being unable to mate lone K except in rare positions according to McCooey's database, long ago I thought I convinced myself to some degree that a N plus a B on the colour of the centre hex could normally perform the task. To clarify, I'm wondering if such 91-hex board endgame database(s) have taken into account whether the B runs on the same colour as the centre hex, or else the other case for colour being different than that of the centre hex, in case the difference is very or even slightly significant to the statistical result for win percentage expected.

Unfortunately, we can't see your image.  You've loaded a link to your local C: drive ("C:/Users/Pat/hexChess.png")

I like all the work and thought you have put into this!  I created a couple of boards to be set up more like regular chess.  Both boards are set up with a row of pawns in front; the king, queen, bishops, knights, and castles/rooks from each side mirror each other; and castling functions in both directions.  Both have an extra bishop so that there is one on each color.

The first board's ends bow towards each other while the middle parts are futhest away, and the wide spread causes extra pawns (11 total) to be required to keep the rooks from being able to automatically get out.  It also has the effect of allowing the bishops to all be able to line up against opposing bishops or a rook immediately after blocking pawns are moved.

The second board also has a row of pawns in front, but it is straight across, and this ends up leaving one blank spot that only the king or a knight could move into.  The bishops are more centrally located so, like your original, none of them or the queen diagonlly line up with any opposing pieces.  Also, the rooks are much more hampered in moving "sideways" than in the first board, which more closely reflects regular chess.

I have attached a picture of the boards.  I am interested to hear what you think!

Very accurate your analysis, Kevin. I am definitely more practical than theoretical and would be happy playing with you any hexagonal variant that you like.
What about this setup? 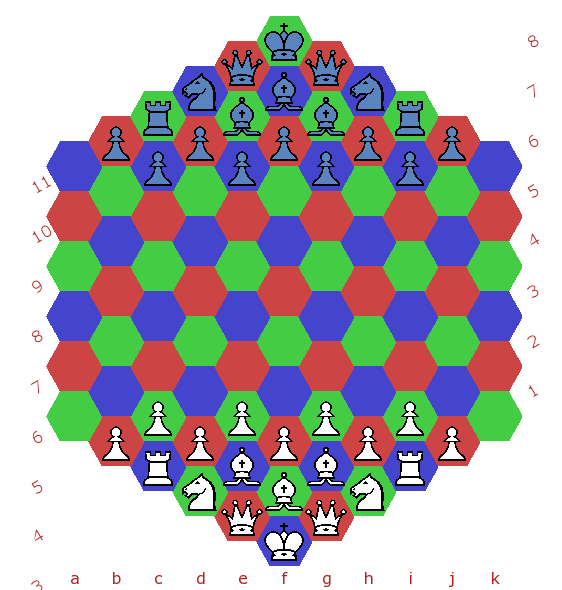 Could it fit, satisfy the lovers of strategic maneuvering taste?

One thing I like about Glinski's game in comparison to the present game is that there is quite a bit less distance on a given file (in terms of hexes) between pawns (especially for edge-ish ones) in Glinski's start position than is the case for the present game. Another thing I like about Glinski's game is that a pawn capture moves the pawn by just one hex 'forward' (in a sense) on the file the pawn finishes its move on, like in chess in that sense. Similar to how a pawn only advances one hex forward on a file when making a non-capturing move in Glinski's game (or the present one, for that matter).

A pawn capture in the present game can advance a pawn by as much as two hexes towards promotion, which doesn't happen in chess - but nor can a diagonal pawn capture fail to advance a pawn towards promotion at all, as often happens with Glinski's game (which is one thing I like about the present game's rules). That is, in both games pawn captures away from more central files are 'rewarded' in terms of being closer to a promotion hex to some degree. Capturing towards a more central file is at least 'rewarded' (to any extent) in the present game (by putting a pawn one hex closer to promoting), I would note. The present game also answers my wish for having similar pawn chains to like in chess, which Glinski's game fails to allow.

Decades ago I saw values given for the pieces in Glinski's that would seem to apply to McCooey's too: P=1; B=3; N=4; R=5; Q=9. I'd add that I estimate the fighting value of K=4 approximately (though naturally it cannot be traded).

[edit: Note that except for a pawn making an initial 2-step move, in McCooey's game it seems it would often take at least 2 moves to make a pawn chain consisting of only just 2 pawns, perhaps more often than is the case in chess.] However, either hexagonal game does not seem to really allow lengthy periods of very locked up ('closed') positions (due to virtually boardwide pawn chains), as can happen in chess, anyway, due to the board's roomy geometry and ratio of pawns & pieces to hexes for both hexagonal games in question. My guess is that lovers of strategic maneuvering might want to look at another sort of variant altogether for that. So far the pros & cons I've mentioned for Glinski's game & the present one tend to balance themselves out in my mind, although I've only played Glinski's game (occasionally), and that was decades ago before my one opponent (my brother) stopped playing. Glinski's game might have a considerably larger over-the board following worldwide, for all I know, though, which could count for something, if only for its having a leg up on the present game. Somehow I received a tube set for Glinski's game a long time ago, but finally discarded it some years ago due to lack of over-the-board opponents locally. In games with my brother, endgames often arose where I'd win with extra pawn(s) - though I'd let him take back gross mistakes earlier in the games since I had more skill at chess-like games than he did. {P.S.: After playing a number of games with an expert in this (McCooey) variant, I've found the game is rather tactical and it's easy to get creamed right from the start! Both sides have a number of tactical weaknesses in the setup, and it seems the number of playable openings may be somewhat limited, at least for the early part of the game. especially from Black's perspective.}

I recently uploaded to YouTube a series of 9 short videos showing the board and moves of a six-player hybrid Square/hexagonal chess game I created about 25 years ago. Thought your readers might be interested: http://www.youtube.com/watch?v=BfpV2uyXj_Q
Trop bidon !
I mentioned that this variant's camps are compact enough to extend to 3 players, but has anyone ever done that and if so with what Checkmate rules?
Your proposal of making pawns attack diagonally toward the center and orthogonally toward the outside would solve the rank advancement problem, but it would not solve the pawn chain problem. If a pawn chain protects itself toward the outside (for example, White pawns on g4, h4, i4), then opposing pawns that block that chain (Black pawns on g5, h5, i5) would be able to capture some of the original pawns (g5xh4 or h5xg4 or h5xi4 or i5xh4). It would be possible to make blocked chains where the pawns can't capture each other, but one of the sides (White or Black) would not form a protection chain. For example, White pawns on g4, h5, i6; Black pawns on g5, h6, i7. All pawns are blocked, and no captures are possible, but the White pawns would not form a protection chain.
Might you rectify both these problems (rank advancement and pawn chains) by forcing pawns to attack diagnally toward the center and orthonogonally toward the outside?
I think Glinski chose his pawn movements such that pawn chains would more closely resemble Fide Chess pawn chains. I chose the same movement for that reason in my Hexagonal Hole Chess. In the rules for that game I discuss both types of Hexagonal Pawn movements. Jonathan's logic also seems very probable.
I only have a theory, but I think I know the reason why Glinski had his form of pawn capture. I suspect it was to avoid getting pawns close the the far rank too quickly. In regular chess, a pawn capture only advances the pawn one step closer to promotion, just as a regular pawn step would have. In Glinski's version, a capture only advances a pawn one step closer as well, while in McCooey's, it actually advances the pawn the equivelant of two spaces closer than it already was. Does that make sense? Glisnki was better emulating the difficulty of pawn promotion, while McCooey was better emulating the movement. I guess it just depends on your preference in that case.
I've never understood Glinski's pawn taking manoeuvre. Dave McCooey's version makes much more sense. Great article!
Very good rules. I agree this is a better game than Glinski's, especially your reasoning behind the pawn moves. I also 'discovered' these moves while experimenting with hex's for a three handed game, before I read about Glinski's game, so I agree they are the most natural rendering of conventional chess into hex's. Look forward to it gaining in popularity!
From one McCooey to another,this looks excellent.Can't wait to find the time to tyr it!
One advantage of this version over Glinski's is that, as it is more compact, it adapts better into a three-handed game.
My kids and I made a hex chess board and we found this to be a lot of fun! The game is quite faithful to conventional chess and the moves were similar enough that my five-year-old son learned them on his own, just from studying this site; thanks for the great diagrams.