This variant combines Yang Qi's symmetric pieces with those of a notional but barely-playable all-short-range "Yin Qi". It can also be viewed as combining pieces from Xiang Qi itself and a reversed-radial variant, or of an all-orthogonal suggestive of a rectilinear Toccata and an all-diagonal. The fourth and sixth would need YQ-style swaps, to limit colourbinding problems. Rather than combining moves in single pieces as does Alibaba Qi, it keeps them all as separate pieces. These types plus the strongest Knights and royally-restricted piece, those of Yang Qi, give eighteen pieces spread across ten types, so I decided to dispense with forward-only ones.

The name reflects the Yin and Yang theme. As a European I judged that Yin Yang Qi sounded too like flying under false colours. Yin Yang on its own was too vague, and the title of another contributor's page began with it. Monad Qi might have been all right, the similarity to the word monarchy particularly suiting a variant with the full King, but suggested a nonexistent connection with Monadchess. I therefore put the words Yin, Yang, and Monad into a search engine and here is the most useful page that I found.

In combination with Inquisition Ashtaranga, this variant has also inspired Inquisitor Qi and Hoo Qi. 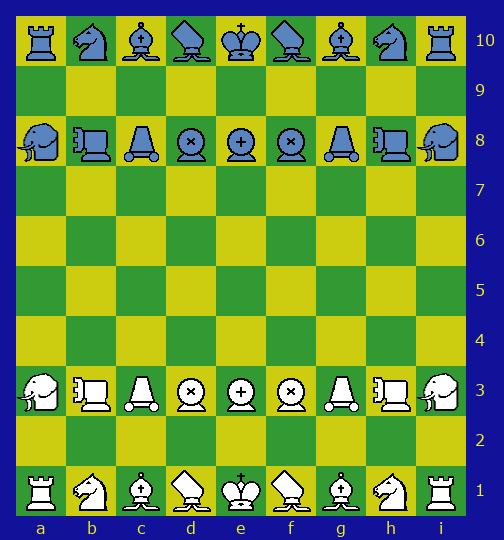 Board restrictions:
* Dabbabas and Elephants cannot cross the River (between the middle 2 ranks) unpromoted.
* Wazirs and Ferzes cannot leave the Fortress (back 2 cells of middle 2 files) unpromoted.
* The King is unrestricted while the player has an unpromoted Wazir or Ferz but, once all these are captured or promoted, must return to the Fortress within two moves and remain in it thereafter.

Other rules:
* There is no Castling.
* In place of a normal move, the King may swap places with any adjacent Yang Qi piece of the same army, including a Knight, if neither piece is threatened. This can help return it to the Fortress if required.
* Check, Checkmate, and Stalemate are as in FIDE Chess.

There is no S in Taijitu. I mention this as the familiarity of Japanese company names makes it all too easy for someone not paying attention to slip one in.