The board and initial setup are the same as in usual chess.

Pole Chess adds one piece to the armies of usual chess, called a Pole. Each player has one Pole (Anthony says its form resembles a barbershop pole), which is off the board at the start of the game.

All rules are as for usual chess, except the rules concerning the Pole. On any turn, in place of making any other move, a player may drop his Pole into any vacant square. The game proceeds as usual except that the Pole normally cannot be captured (but see the following paragraph), nor can any sliding piece move through the square the Pole occupies. The Pole itself can be moved, on the player's turn, to any vacant square; it can never capture any piece.

Anthony hints that there is another rule that allows a Pole to be captured in extremely unusual circumstances, but he doesn't describe what those circumstances are.

The natural assumption is that Pole Chess would be even more drawish than usual chess; however, I've written a ZRF for Pole Chess and had Zillions play against itself several times, and it seems to reach checkmate fairly often. Only extensive human testing would settle the question of how drawish Pole Chess is.

I would hope, though, that the mysterious Pole-capturing rule would somehow address the difficulty of forcing checkmate when any single-pronged mating attacks from a distance can be blocked by a Pole, though I can't imagine what the rule would be. Perhaps the readers of this page can make suggestions. It would be interesting to know whether Piers Anthony himself has played this game with his friends, and if so, whether he really has a clear Pole-capturing rule already in mind, and simply didn't find a good place in his novel for describing it.

I thought the tactics that Zillions found for using the Pole were sometimes interesting. 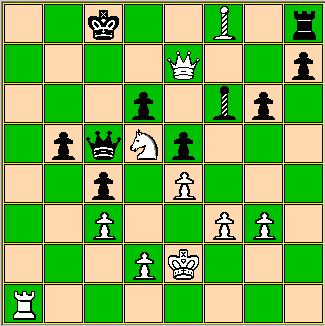