Pole Chess is F.I.D.E. chess with a piece added for either side: the Poles. It was first described by writer Piers Anthony in his science-fiction / fantasy book "Robot Adept" (1988). The book describes a match between two players, one in the scientific world of Proton, the other in the magical world of Phaze. 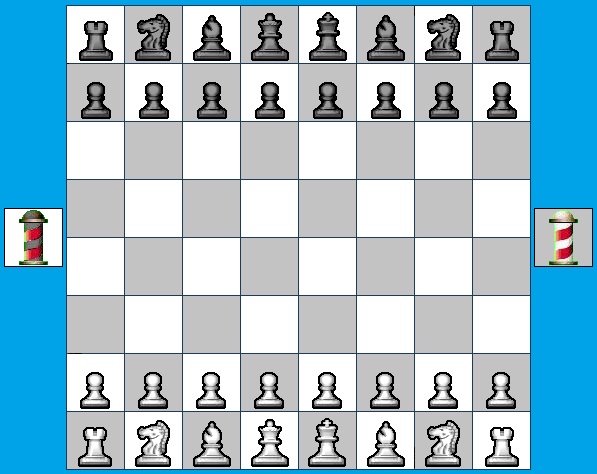 The Poles start the game off the board to either side. They can be "invoked" anytime after the first piece is lost on either side. It can go to any unoccupied square on the board in one move. It can neither take nor be taken (except for the mysterious "Pole-capturing" rule); it can only block. A pawn cannot promote to a Pole.

The game is won by checkmating your opponent's King or by your opponent resigning. The rules for drawing a game are as for F.I.D.E. Chess. Apart from rules involving the Poles, the rules and movement of pieces are unchanged. Piers Anthony's book said "The pole could neither take nor be taken, except in one very special circumstance." This special circumstance was not described further in his book, he apparently never worked it out. This has led to speculation about the mysterious "Pole-capturing" rule.