Thirteen letters followed by a digit? Yes, it's a second, again less-than-ten-page, series of Gilman variants! This one builds on the principle used in Mitregi with compounds of duals and Wildeurasian Mitregi. It follows the same pattern of taking a pre-existing variant with Pawns and symmetric pieces, adding a rim one cell deep around it, filling the new back ranks with forward-only (FO) versions of the symmetric pieces, and putting extra Pawns on the new cells of the Pawn rank.

Those variants largely place each FO piece diagonally out from the corresponding symmetric one rather than directly behind it. These ones do likewise. This suggested to me the image of a window frame, and as the windows in my home (at the time of inventing) have wooden frames I immediately think to the complex carpentry in them and particularly mitring, as the piece that I term Mitre recurs throughout the series. As I incorporated the piece's name into existing variants I decided to use it in the series name and add the rim only to games having a Bishop in the original back row. Thus Shoxiang 108 does not fit the pattern, even in the Shogi-heavy form, as it frames Xiang Qi and adds the Bishop in as a traditional Shogi piece.

This first page of the series deals exclusively with adding a rim to an 8 by 8 board. The next page in this series also ends up as 10x10, but from 9-file original variants. 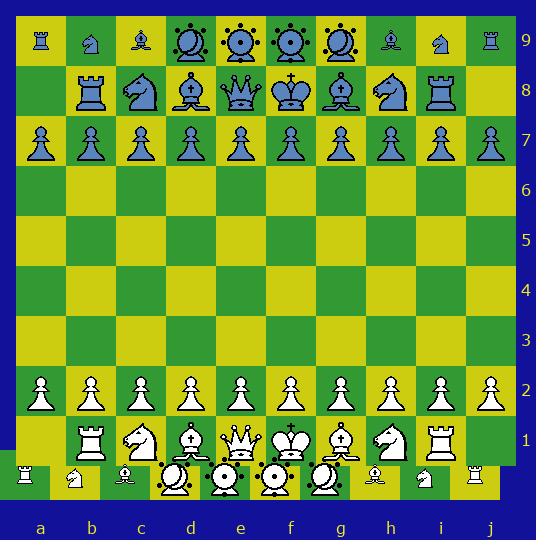 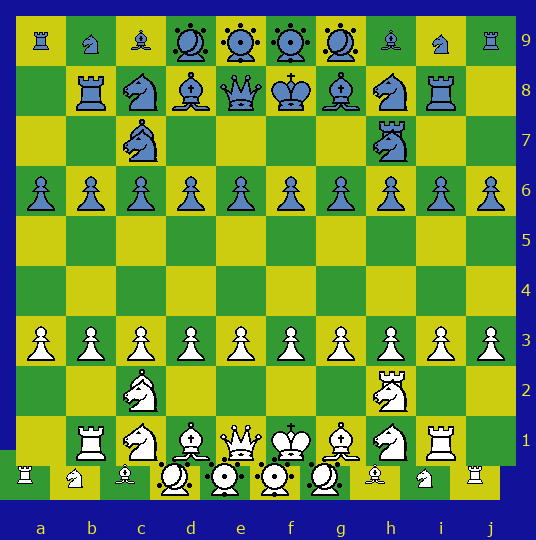 MITRED NOTCHESS uses one FIDE and one Shogi set. Pawns represent Camels, the FIDE King the Gnu, and Shogi Rooks/Bishops/Golds Princesses/Handymen/Humps. The Shogi King is not in the array but represents the Hump promoted to Silver. As there are neither 10 of any piece nor a spare piece to duplicate, I omit the Pawn in front of the Gnu as the one contributing least to shielding the back rank. MITRED FRONTOFHOUSE NOTCHESS uses two Shogi sets. Shogi Kings/Rooks/Bishops/Golds represent Camels/Princesses/Handymen/Humps, and promoted Rooks/Bishops/Wings/Helms/Silvers Queens/Gnus/Rooks/Knights/Bishops. Both use this array: 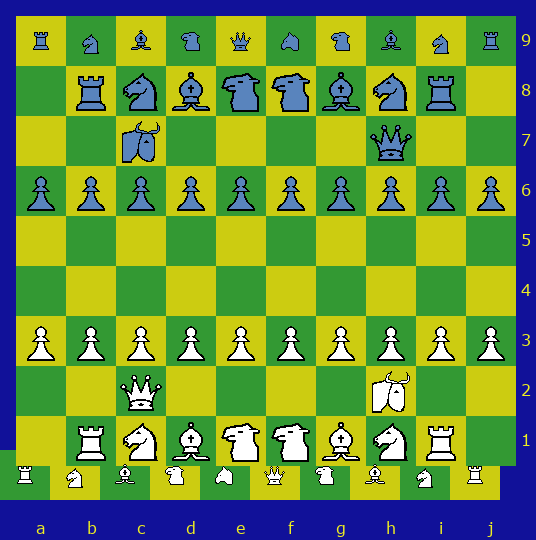 Pieces are listed by my preferred English name for them, with an actual or suggested Japanese name and its translation in brackets. If someone who knows the Japanese for Crab can fill in this gaps in my knowledge please do so in a comment. Pieces returning as a lesser piece can be promoted back to their array piece type, and promotees always return unpromoted.

Pawns have an initial double-step move from their player's first three ranks, and can immediately be captured En Passant by any enemy Pawn that could have captured normally had they moved only the single step.

Castling, Check, Checkmate, and Stalemate are as in FIDE Chess, except in Mitred Notchess and Mitred Frontofhouse Notchess. The latter variants have victory by capturing all of any of the following groups (including those promoted to other pieces):
* Rooks, Wings, Queens, Princesses;
* Bishops, Mitres, Queens, Princesses;
* Knights, Helms, Gnus, Handymen;
* Camels, Humps, Gnus, Handymen.
Mitred Notchess also allows (as with Wildeurasian Mitregi) a win for a player having the maximum 4 Princes and the enemy not immediately capturing one.

In the notes to the third page in this series I discuss a possible variant, Los Generales, that though not strictly Mitred uses much the same concept. On the scale dealt with here, an OKISAKI LOS GENERALES would be possible. The back rank would be Wing-Helm-Princess-Silver-Gold-Gold-Silver-Princess-Helm-Wing, the second rank empty-Rookranker-Nightranker-Queenranker-empty-empty-Queenranker-Nightranker-Rookranker-empty, the third empty-empty-Rook-Knight-Queen-King-Knight-Rook-empty-empty, and the fourth rank full of Pawns. The big question is what would be promotable to what in each promotion style.