This variant has its roots in the comments on the Fibnif, which identified its oblique component as the Heavenly Horse of Wa Shogi. The latter piece, I noticed, is bound to one in four squares, its binding being a skew version of the Dabbaba binding on the same board, but uncannily like the Wellisch board's Dabbaba binding. The main functional difference was that without the sideways Dabbaba move the piece was fileswitching. It occurred to me that the piece adding in that missing move might be interesting too.

I later added the exotic pieces to my article Man and Beast 12: Alternative Fronts, complete with names. As with directly translating all Shogi-variant piece names except the generals, I considered Heavenly Horse too cumbersome and termed that piece a Nightranker (short for Knight moving more ranks than files). Likewise I termed its 90Â° rotation Nightfiler, the forward-and-backward-only Dabbaba Dabbaranker, and the sideways-only Dabbaba Dabbafiler. Then I termed Nightranker+Dabbafiler Knave and Nightfiler+Dabbaranker Debtor, inspired by the starts and ends of the symmetric pieces' names and the German knabe, which means boy and is cognate with knave. Having devised the names, I now have a variant using them.

I decided to give each binding a Knave and Debtor aside, and not bother with Knights as these pieces had between them all the Knight moves. Therefore I inserted the new pieces where Knights normally go, enlarging the board accordingly. As this added space for more pieces I decided to throw in the compound of the two, the Carpenter of my micro-regional variant Avon, on the King and Queen files. Initially I considered having a block of Knaves on one side and a block of Debtors on the other, knowing that any 4-cell "supersquare" includes a square of each binding. Then I saw that a symmetric array, save for King and Queen files, worked just as well at covering all four bindings. My original plan was also to have the FIDE pieces on the back rank, but I later realised that putting them on the second rank with a back rank entirely of leaping pieces would leave the Pawns better, and more symmetrically, protected. Castling works somewhat better right behind the Pawns too. Many of the distinctive pieces are hard to develop in the opening, but perhaps come into their own during the mid- and end-game.

Since creating the original game I have added an 8-file array to give an even more FIDE-like opening. In 2014 I noticed a further property of Knaves and Debtors that a Knave always moves to a different Debtor binding and vice versa. This is not the same as being Switching in any sense as they have the triangulating property of the hex-board pieces that they imitate. It got me thinking about a piece moving like a Knave when not capturing and a Debtor when capturing, which I termed Kneader, or vice versa, which I termed a Contrakneader. These are now included in my piece article Man and Beast 19: The Vice Squad. They can be seen as restricted Carpenters in the way that the Steward and Contrasteward are restricted Princes. The unbound full Carpenter's strength is clearly far more than the sum of those of the severely bound Knave and Debtor, so it would be interesting to consider the strength of the Kneader and Contrakneader. I came up with another array on the larger board with Kneaders and Contrakneaders.

There are three different kinds of bindings, none of which is a subset of another.

The KING, QUEEN, ROOK, BISHOP, and PAWN are the familiar FIDE compound pieces. 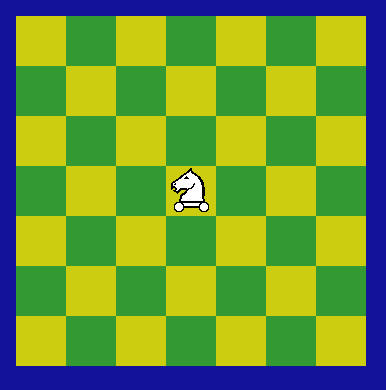 The CARPENTER is the compound or Knave and Debtor, of Kneader and Contrakneader, or - in terms of historic pieces - of Knight and Dabbaba. It is unbound. 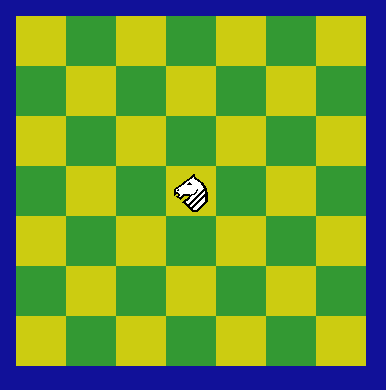 The KNAVE moves either two ranks and one file as a Knight, or two files directly sideways as a Dabbaba. It is a square-board analogue to a Dabbaba on a Wellisch board. It is bound to alternate ranks, and half of each rank, but unlike the real Dabbaba on a square board it can reach every file and both Bishop bindings. 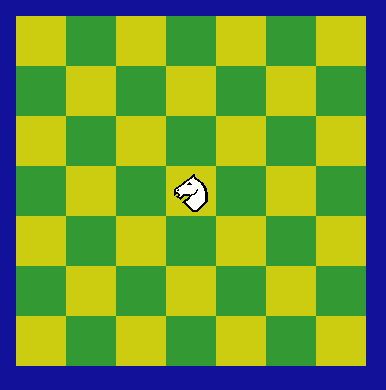 The DEBTOR moves either two files and one rank as a Knight, or two ranks directly forward or backward as a Dabbaba. It is a square-board analogue to a Dabbaba on a Glinski/McCooey board. It is bound to alternate files, and half of each file, but unlike the real Dabbaba on a square board it can reach every rank and both Bishop bindings. 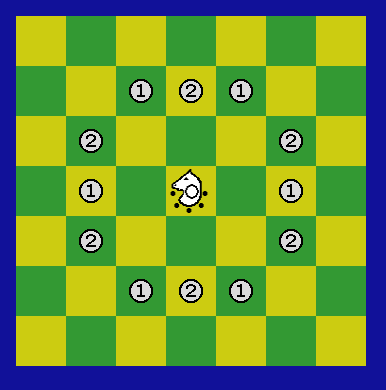 The KNEADER moves as a Knave except when capturing, which it does as a Debtor. It is unbound. 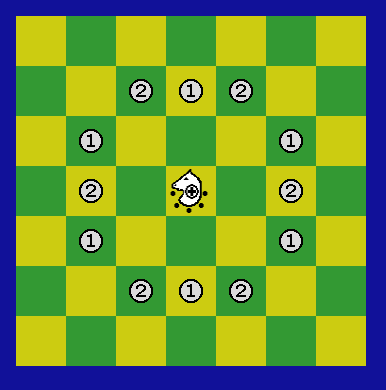 The CONTRAKNEADER moves as a Debtor except when capturing, which it does as a Knave. It is unbound.

This variant's form of the Knave, Debtor, Carpenter, Kneader, and Contrakneader cannot be blocked by any piece.

Pawns have an optional initial double-step noncapturing move. Enemy Pawns (but no other piece) can immediately capture them En Passant as if they had made only the single step.

A Pawn reaching the far rank must be promoted to Queen or Carpenter. Underpromotion is not allowed.

A subvariant allows optional promotion on the far rank of Rook and Bishop to Queen, and Knave and Debtor to Carpenter. A further subvariant allows all pieces to return from capture in unpromoted form in place of a normal move, in the style of Bishogi and Wildebishogi, with Pawns not being allowed to be placed on either end rank.

The pieces can be represented by two Shogi sets with Kings, Rooks, and Bishops representing themselves. Of the rest, Points pretty much have to represent Pawns. For Knaves and Debtors I would recommend Helms and Wings respectively to reflect whether the forward move is oblique or radial. Pawn promotion can be marked by flipping for Carpenters and doubling up (there are enough to spare) for Queens. As this leaves the Gold and Silver over I suggest using these for Kneaders and Contrakneaders in subvariants using them. It is the use of Shogi pieces that inspires subvariants with extra promotions and/or return from capture.

Every Knave binding intersects every Debtor binding and vice versa, and in equal measure on a board both of whose dimensions are divisible by 4 (such as the FIDE/Shatranj one). Therefore there is no need to worry on such a board about putting a Knave and Debtor on bindings that overlap "too much". Once one of the dimensions is not divisible by 4 (such as the board shown on this page) it introduces differential intersections. For example, in the Knave and Debtor binding images in the Setup section a Knave binding intersects more with the Debtor binding shown in the same colour than with any other Debtor binding, and vice versa.

As the Knave and Debtor are "skewings" of the Dabbaba, so it is possible to "unskew" the Dabbaba on hex boards - to Vicbaranker+Dabbafiler on a Wellisch board and Dabbaranker+Vicbafiler on a Glinski-NcCooey one. These pieces also retain the binding to 1 in 4 cells, and have the square-board Dabbaba's switching. I have not named these "unskewed" Dabbabas yet, and welcome any ideas. Nor are the names Knave and Debtor intended for extrapolations from Knight moves to other oblique directions, as such directions do not relate to the Dabbaba move in the same way. The nearest parallel for a "skewed Trebuchet" would be the likes of left most-forward and right most-backward Camel, plus right most-forward and left most-backward Zebra, plus Trebufiler.