This page is written by the game's inventor, Charles Daniel.

Derived from the sub-variant: Birds and Leaping Ninjas, Insane Ninja Chess uses the same unique board and rules from this family of games. Instead of the flying bombers, this variant features a pair of the very exciting and powerful Insane Ninjas.

The main characteristics of this game are a large 10x10 board with 4 protruding squares from each side's backrank, flexible castling, logically extended en-passant rules and initial pawn move. Except for these and the two new pieces, the game is identical to orthodox chess.

There are two games contained in this title. The main variation uses board setup #1 and a pair of Leaping Ninja Guards housed in the two extra squares.
The second game uses setup #2 and houses the Insane Ninjas in the two back squares instead of at the wings. The leaping guards are replaced by regular ninja guards - the same pieces without the camel's leaping move.

Note that the balance between leapers (3) and sliders (2 pairs plus Queen) is dramatically different from that of orthodox chess.

In this setup, the ninja guards replace the leaping ninja guards. (There is no leaping camel move for these pieces). 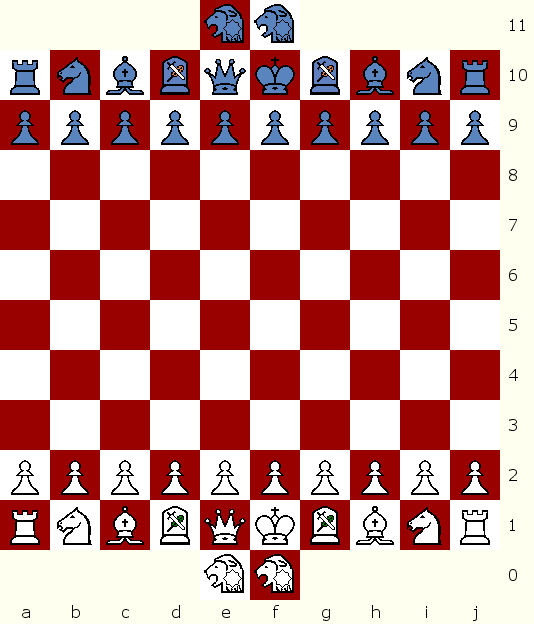 The Leaping Ninja Guard is a color bound piece with three modes of movement and two capture modes.

Capturing
Note that the leaping ninja guard can only capture one piece on the square it lands if performing the extended knight 3,1 jump move or if moving one step diagonally.

The rules are as in orthodox chess except as noted below:

This subvariation adds an exciting twist to the game

The ninja pawn possesses slightly different modes of movement and capture depending on which half of the board it is on.

Dropping:
The ninja pawn is not present at the start at the game and is dropped by the player into the drop zone, which are each side's 2nd rank squares. For example, the drop zone for white is from a2-j2 and for black from a9-j9.
The square must be vacant to drop the pawn. You can optionally move the pawn forward towards the center on the same move but you cannot make a capture on the same move as the drop. You can however drop a pawn to check or to checkmate the opposing king A maximum of 4 ninja pawns can be dropped by each side during a game.

Movement:
The ninja pawn can always move 1 square up or 1 square sideways to an empty square from any part of the board.

When the pawn is situated in the lower half of the board (for White, rank 0-5 and for black 11-6), it can move forward multiple vacant squares (1-3 squares) to reach the middle of the board (rank 5 for White or rank 6 for Black). This move can be done at any time regardless of how many times the pawn has moved.

Capture:
Like the standard pawn it can capture one square diagonally up, regardless of which half of the board it is on.
When the ninja pawn is on the top half of board (White rank 6 +, Black rank 5-) , it can also capture one square horizontally.

There is no en passant. It cannot capture another pawn or ninja pawn en passant nor can any other pawn capture it this way.

Promotion: The ninja pawn promotes on the last row (rank 10 for white, rank 1 for black), to any piece. Promotion to a piece is mandatory so it would cease to be a pawn in the last row.