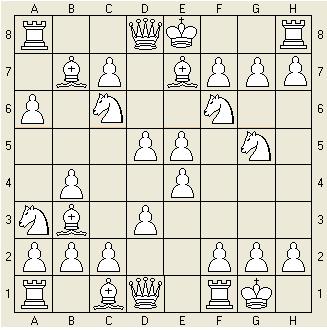 Note: In the above diagram it is not too difficult to figure out Black and White. But as the game progresses, within a player's mind, pawns and pieces may become confused as to which belongs to who. As the endgame approaches, it becomes easier to track pieces again.

Players with poor memories are best to avoid this game (or perhaps play it to strengthen their memory). Trading down will ease the mental strain.

As in Fide Chess, with these exceptions:

1) Both player's sets of pieces are identical in color and in design and size. For example: From two identical chess sets the game could make use of 32 white pieces or 32 dark pieces. "White" player's pawns would look the same as "Black" player's pawns, etc.*

2) The board is uniform in color. There are no light and dark squares. Thus, a traditional Makruk board is acceptable.

3) A referee with a dual-color pocket set in hand is to monitor the game.

4) A Chess clock is needed.

*A single set idea, contributed by Simon Jepps, is included in the notes.

As in Fide chess; but both player's piece sets are identical - as indicated in "Setup."

As in Fide chess, but it is recommended that the time-control for games does not exceed 1 hour per player. Likewise, games should not be played faster than 30 minute per player.

Note that only games played face-to-face can be considered as valid for game score results.

Players move, as in Fide chess. But each must mentally keep track of his and opponent's pieces. Players are not allowed to record moves, as this could aid them in memory. The referee will record the moves.

Play becomes more difficult in the middle game when pieces are distant from their home squares. Remember, all pawns will look alike, all bishops, etc. A passerby would not know what piece or pawn belonged to who.

The referee plays the moves on a dual-color pocket set (kept out of sight to the players); and the referee records the moves.

1) The referee calls "Illegal, opponent's piece." (The opponent can also call this, if noticed.)

2) The referee stops the clock.

3) The piece moved is returned to the correct square (where it resided prior to the illegal move.)

4) The maker of the illegal move has 5-minutes of time deducted from his clock. The time penalty can be adjusted by agreement of both players. But if there is no mutual agreement, 5 minutes shall be used as the penalty.

5) If the piece attempted to be moved can be legally captured, the referee must announce that "You must capture this piece."

6) In the case of rule 5, if the player attempts to capture the piece with his opponent's piece; then the referee states, "Illegal capture. Another capture attempt must be made. Another time penalty is invoked." Again, the board is corrected and the clock is stopped and adjusted.

7) If a player moves such that he is in check, the referee would state, "Illegal move - exposing your King to Check. Piece time penalties are applied as appropriate. In addition, there is a five minute penalty for exposing your king to check." 8) The game ends with checkmate, time forfeit, draw, or resignation from a player.

To make a set two inexpensive identical sets can be purchased (I've seen these for under $4). Then all White 32 pieces can be used as the game set.

The cardboard game board can be spray-painted white, light-brown, or some other color (of course) allowed to dry, and then marked with grid lines to form the 64 squares. Or, 64 same-color tiles can be glued to a board.

SIMON JEPPS' IDEA FOR A ONE-SET SETUP: Note added 10-27-2008: Simon Jepps' suggested the following setup variation which makes use of one chess set (not 2 as in my concept). Take a standard chess set and switch the colors to every other chess piece. Thus we would see for White from A1 to H1 as follows: White Rook/Black Knight/White Bishop/Black Queen/White King/Black Bishop/White Knight/Black Rook. And Black's side of the board would have a Black Rook on A8 and alternate in a similar fashion. Pawns, too, would alternate. In the absence of a umpire (referee) Mr. Jepp's would allow notation, to be used as a method of resolving a dispute . In this instance [with no referee] after each move, each player would be required to cover his score sheet. The pieces would be marked on the bottom to identify White from Black pieces, in event of a dispute regarding whose piece was moved or captured.

I of course have no objection to people playing with a dual-color set. However, I personally prefer to use a uni-color set because if I were playing standard chess I would not want my mind to start playing tricks on me with the idea of certain White pieces actually being Black pieces and visa versa. Others however, may not be bothered by this.

One thing is certain, the chess positions would be very very wild... and each one would present quite an illusion. I believe this dual-color setup would be more difficult to play.