This name may puzzle you, as there is no variant just called Stour. However, Great Stour is the name of a river in Kent, the part of the British Isles nearest continental Europe. The prefix is primarily to distinguish it from the same area's Little Stour but also serves - like the Great Ouse of which the Cam is a tributary - to distinguish it from many other rivers with the unqualified name. Yes, this is another in my series representing the rivers/cathedrals/universities of English cities. Those familiar with this series may recall that the Avon of my third such variant is also one of many rivers so named and that there are rivers called Colne both east and west of London.

Having struck north for the series' previous two pages, the four-player variants Irwell and Aire, I returned south. The board is larger than any before it in the series, partly to reflect the relatively large and sparse area of this variant's setting (see Notes section below) and partly to conform to a title starting with Great. The Great Stour passes north of the heart of Canterbury, including its archiepiscopal cathedral, but south of the University of Kent. Upstream of Canterbury the river passes north of Wye College, which was for many decades (again see Notes section below) an astonishingly remote outpost of London's own university. As its remoteness prevents this constituting a two-city variant and justifying a second pair of players I simplify the definition of forward (as usual White pieces represent the relevant side of the River and Black ones their reflections) to always be toward or across the River. After much wondering how to fill the gap between Canterbury and Wye, I decided to reflect east Kent's growing wild boar population. It seemed fitting to complement the Boar by enhancing the Pawn promotee, a Wazir in most southern English settings, to be a Sow. For more about these pieces see my piece article Man and Beast 11: Long-nosed Generals. 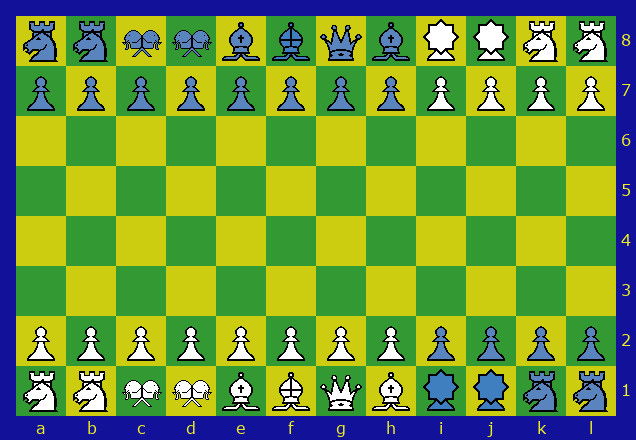 * The longer Boar and Sow moves in this game are Leaping ones, not blocked by an intervening piece. As this game defines forward as toward or across the River the Boar and Sow have two-square leaps even from the enemy camp - but always to one of the middle four ranks. It also allows non-mutual threats by a Boar or Sow in a camp to an enemy of its kind in the middle area.

The Courier-width board puts pieces far enough apart to make Castling and Cathedralling meaningful, fittingly given its setting's lack of conventional urbanity. Castling involves the Primate moving to file d and the a- or b-file Marshal to file e, both along the rank. Cathedralling involves the i-file Prince moving to file e and the b-file Marshal to file f, both along the connecting diagonal. All intermediate squares must be empty and an enemy piece immediately moving to any part of the restricted piece's extended move captures that piece. This is an analogue to the "Castling through Check" ban but is not an outright ban as long as another restricted piece is available to take over.

There is no initial double-step Pawn move, Check, Checkmate, or Stalemate. A player with no legal move, including having a restricted piece each side of the River, loses the game.

Pieces can be represented by two identical FIDE sets with Kings/Queens/Bishops representing pieces moving the same way, Rooks as Boars, inverted Rooks as Primates, and Knights as Marshals. Promotion to Sow can be marked by adding a second Pawn on the same square - and hoping that they don't run out. An alternative with less uncertainty would be to have one FIDE set as non-Pawns - substituting Kings as Primates, Knights as Princes, Pawns as Marshals - and a Shogi or Draughts set unpromoted for Pawns and promoted for Sows.

Seventh array piece types rejected before I selected the Boar include the Dean, Gunboat, Brewer, and Ubi-Ubi. The Dean, a Bishop with a 2-step orthogonal move instead of the 1-step diagonal one, was rejected because the special suffragan bishops render deans no more important in Canterbury than elsewhere. The Gunboat, a fully or partly Hopping versions of the Alibaba and my shortest-range nautically-named piece to represent the district reaching the coast, was rejected for being too hard to fit on their logical ranks without threatening anything. The piece that I termed Brewer at the time of this page's posting, a Bishop restricted to making noncapturing odd-length and capturing even-length moves, would allude to Kent's part in hop growing, and was rejected as I judged the connection too tenuous. In any case the family of names to which Brewer belonged has been dropped as the prefixes Cubbed and Uncubbed cover the relevant pieces and many new ones without need for individual names. The Ubi-Ubi, whose ability to make a Knight's Tour in a single move would pun on the river name, was rejected for being far stronger than even the Nightrider and Rose needing such restraining elsewhere in the series.

As Anglicanism does not use the title Cardinal this variant does not use the piece known by that name. The original Anglican diocesan system was however inherited from Catholicism, and mediaeval Canterbury often had a cardinal as archbishop, as a much earlier variant of mine set in that period represents. Sharing both that page's use of the Cardinal piece and this one's use of the Primate one are pages 4, 5, and 6 of my Armies of Faith series.

The city of Canterbury began as a single compact settlement which never achieved the population that cities in the Northern variants did. The 20th Century saw the administrative district and its charter extended to include surrounding countryside and even some of the smaller resorts of Kent's north coast. This gives it an unusually large area but modest population for a city.

The college at Wye specialises in agricultural courses. This explains its rural location nearly 100km from central London. In a rationalisation of London colleges it was administratively incorporated into Imperial College, whose main campus is just north of the South Kensington cluster of museums in Inner London. In 2007 Imperial College left the University of London to become a university in its own right, taking Wye with it. The breakaway was not widely advertised, and I did not read about it until 2010.

Kent is a particularly ancient territory, taking its name from its pre-Roman tribe. The first syllable of Canterbury shares its derivation. It was a recognised tribal area in Roman times, and later a distinct if small kingdom of the Anglo-Saxon Heptarchy. This is why it never acquired the -shire suffix. It is unsurprising that Duke of Kent is yet another title of the English - and later British - royal family like those of Lancaster and York.

The wild boar population of Kent is as a result not of deliberate introduction into the wild but of escapes following attempts to farm them (the word "wild" may have been a clue as to the folly of this). The Leaping form of the two-step move is a fitting representation of their escaping abilities.