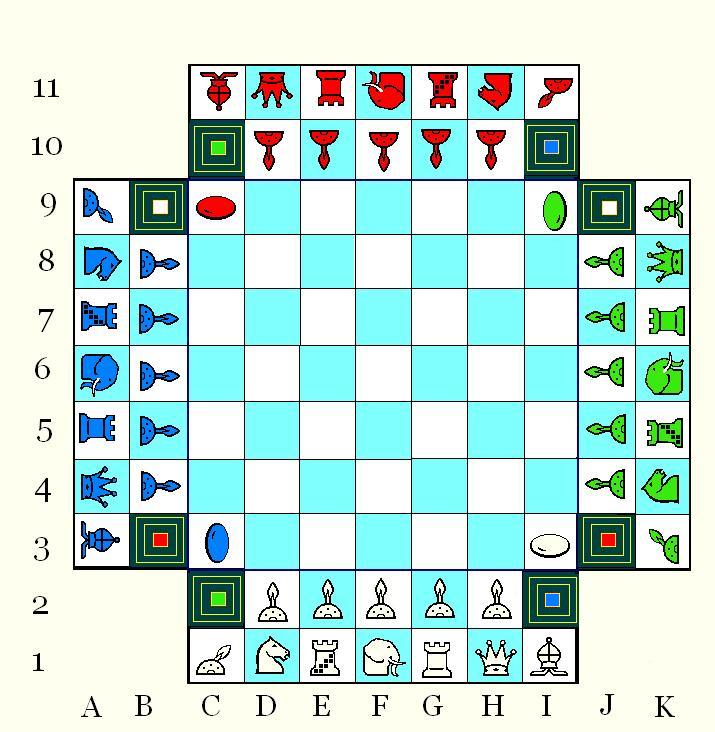 4-Handed Elephant Chess Â© July 2006 by Gary K. Gifford The object of Four-Handed Elephant Chess is to win the game by capturing both of your opponentâ€™s Elephants. There are no checks or checkmates. WHITE and RED are Partners BLUE and GREEN are Partners [Rules for a variant where 4-Players battle against each other are provided at the end of the Rules section] Order of Play: Clockwise, White moves first. This game is based on my 3-Elephant Chess and an early variation of Four-Handed Chess (which I was thinking about again after having looked at David A. Mahan's "Chess Jester," very closely related to 4-handed chess). At any rate, I had been thinking of using Spearmen capable of rotating 8-angles. Also, Joe Joyce and I had discussed the concept briefly during our play of Three Elephant Chess. Joe and I both enjoy the Spearmen rotation factor of that game, which reminds us a bit of Avalon-Hill wargame manuevers. In 3-Elephant Chess I believe that the 3 angles of rotation are quite adequate. But in this 4-handed game we have opponents at 90 degrees and it so it seems very logical to introduce the multi-directional Spearmen to this type of battlefield. So in this game I have kept the essence of 3 Elephant Chess and have adapted it for four-handed play. Beyond the board and setup changes, the adaptation includes a modification to the Spearmen and to the War Tower. Note: My Spearman in 3 Elephant Chess were likely inspired by related piece movement found in Ploy, a chess variant produced by 3M Games (now extinct). The War Tower is closely related to my Ram piece in Catapults of Troy. The Ram would take out an entire rank or file then â€œsplinterâ€ (self-destruct). 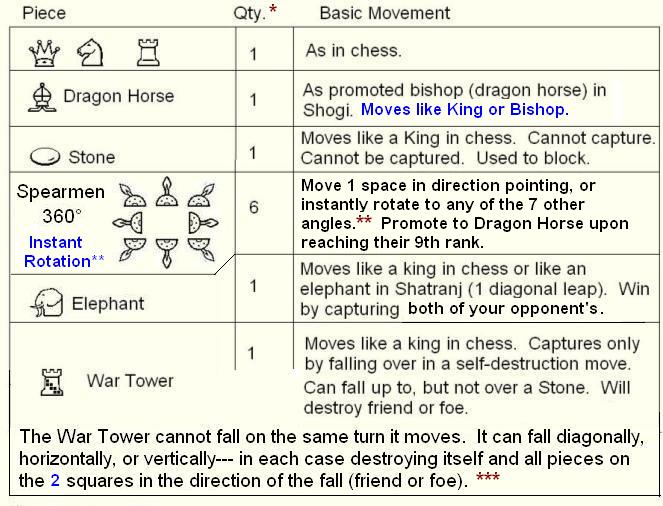 * Quantity is "per-player" ** The Spearmen in this game can rotate to any of their 7 other available angles instantly. In the original 3-Elephant Chess this is not the case. *** The War Towers in this game can fall and take out two spaces of material in the direction of their fall. This is different than found in 3-Elephant chess where ther is an additonal space of destruction.