This page is written by the game's inventor, Johnny Luken.

Expanded Chess 256 is an attempt to scale FIDE Chess to a 16*16 board in as rigorous a manner as possible. Its additional ruleset is constructed upon the idea of being able to emulate an orthodox game of Chess. As such, Chess 256 is not just a variant of FIDE chess, but in terms of game trees, it is a superset of it. 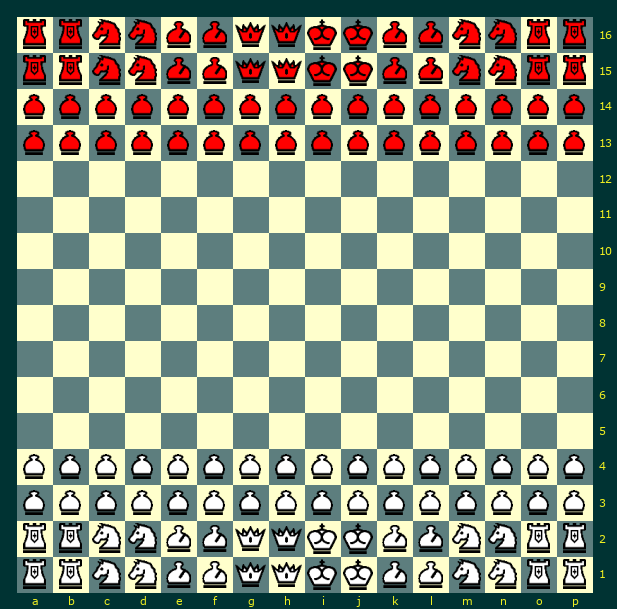 Setup mimics that of chess, with pieces replaced by 4 piece blocks, so as to fill out a 16 square board-rooks on the outside, knights, then bishops, then queens, and kings and orthodox pawns on the 3rd and 4th rank.

Material types and their ratio are the same as in FIDE Chess: 32 pawns, 8 rooks, 8 knights, 8 bishops, 4 kings, 4 queens for each side.

Objectives are exactly as that of FIDE chess, however several alterations have been made to the mechanics to map it to a 256 square board. They are as follows...

The principle new mechanic in Chess 256 is that piece groups of common type that form symettrical structures may moveas one piece of that type. These structures are squares or lines with up to 4 connected pieces.

Diagonal moving piece groups are only blocked by the central diagonal line of movement and thus can "clip" pieces that don't perfectly impede movement. This rule is necessary to preserve mobility of diagonal movement relative to othogonal for piece groups.

Any unmoved piece or piece groups may replicate FIDE castling with start and end positions mapped to the equivalent 4-blocks of Chess 256.

Pawns can move up to 4 squares on an initial move, and 2 thereafter. En passant is expanded for the enhanced pawn movement (eg FIDE pawn bypassing FIDE pawn 2 files away can be captured en passant, with the pawn finishing on its file.

All pawns promote on the final rank to a Queen.

Game ends when any king is captured. Check is enforced as in FIDE Chess.

Expanded Chess 256 largely negates common problems of larger variants-slack fragmented gameplay, weak attritional short range pieces, slow unreactive developement, sparse board setups. "Proof of concept" is that fools mate and scholars mate are achievable in an equivalent number of steps as in FIDE Chess, and indeed an entire game can be replicated if so desired.

Gameplay has extra elements. Territorial attritional combat is replaced by more organic assymetrical combat. Its arguable that this would still be a very playable game even without royal pieces. Group movement also adds an additional consideration in that more homogenous piece sets are more mobile.