Beyond Chess was created in 2001 by David L. Crockett. Dave Crockett, was a United States Marine when he designed the concept of a moving board. Traditional chess is fashioned after the ancient style of warfare where two armies march toward each other across an open field of battle. As a Marine, Dave Crockett knew very well that modern warfare is fought over vast expanses and the environment is ever changing from moment to moment.

The dynamic of a moving board creates an ever changing environment that directly affects the movement of the chessmen and the strategy of the game all the way to checkmate.

Because the board is made of individual squares, they can be setup in any configuration to begin the game. This means the board can be used universally to mimic just about any other chess variation (like the 5x6, 8x10, 9x9 boards, etc.) and with variations such as Bughouse and Plunder Chess, only with the added benefit of being able to move the board squares as part of the game play. you could even setup the board differently every time you play, making the possibilities endless.

Dave Crockett took Beyond Chess with him in 2003 to Iraq and played the game with fellow Marines during down time.

The rules of Beyond Chess have a copyright 2006, Beyond Chess is trademarked 2007 and the moving board has a patent pending.

The board starts out as a standard 8x8 grid, however, as the game progresses, the squares of the board can be shifted, creating a larger grid with gaps. Alternate starting grids may be used, creating unique board shapes. 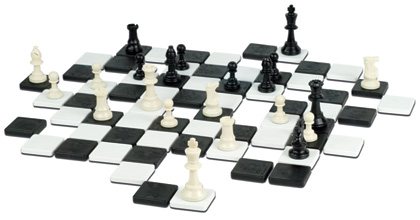 I do not have access to the rules of Beyond Chess. So what follows are my impressions of the rules:

Beyond Chess is a commercially available game. The name is trademarked and the rules are copyrighted. For details on purchasing this game, as well as more information (including a strategy guide), go to the Beyond Chess web site.

Looking at the game board, I think it would be nice if the tiles were white on one side, black on the other. Then, when shifting a tile, it could also be flipped, to maintain a classic checkered (ie. alternating black and white tiles) board look.

Note that this game would also make a nice addition to any one's "chess variant kit", expanding on the possibilities of different boards and different dynamics for chess, as well as other chess variants.