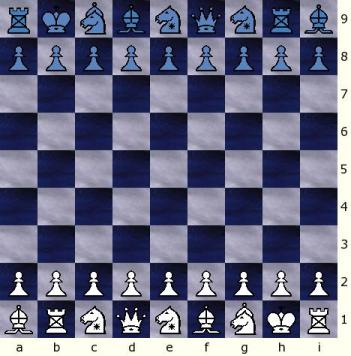 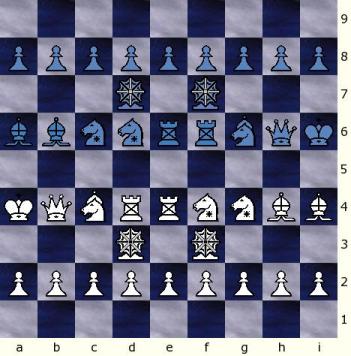 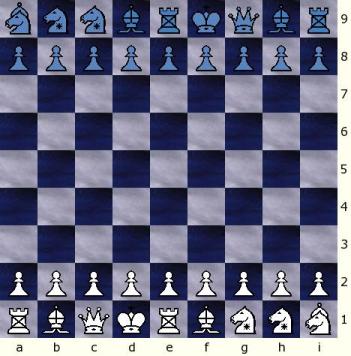 All pieces are randomly placed in the playerâ€™s first rank, with the only restriction that the King must be between the two rooks. It is possible for both Bishops to be on the same color squares (dark or light squares). The opponentsâ€™ pieces are placed with reverse symmetry (Whiteâ€™s piece at a1 is equivalent to Blackâ€™s i9, Whiteâ€™s b1 to Blackâ€™s h9, Whiteâ€™s c1 to Blackâ€™s g9, Whiteâ€™s d1 to Blackâ€™s f9, and so onâ€¦)

There is no need for the Bishop Adjustment rule in Ajax Modern Random Chess as Bishops are free to swap to opposite color squares at any time thanks to their one-step non-capturing orthogonal move.

Look at the sample Ajax Modern Random Chess positions below, from both White and Blackâ€™s point of view: 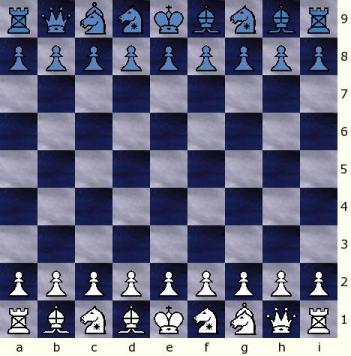 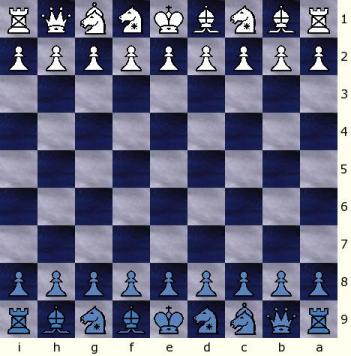 They look identical from both Whiteâ€™s and Black's point of view. That's reverse symmetry!

Like a Bishop, the Ajax Prime Minister get an additional one-step orthogonal move (Wazir).

The additional "adopted" Commoner moves are intended to easily allow a Prime Minister, Rook, Bishop and Knight to move to a new outpost where they can carry their orthodox attacks. They can also use their "adopted" moves to block an enemy attack.

The precedent for the Ajax-Pieces not being able to capture with their adopted Commoner moves is the Pawn. The Pawn moves in one direction (straight forward) and captures in another (diagonally forward).

Pawns can play one or two squares in their initial move. They capture one square diagonally as in regular chess and may promote to any piece (Queen, Prime Minister, Rook, Minister, Bishop or Knight) upon reaching their last rank.

Initial Placement of the Ajax-Ministers

When a player first moves a piece from its original square, that player has the option of placing a Minister on the vacated square, as part of the player's move.

Example, if one of the player's initial Bishop's move was Be1-g3, he can place a Minister on the vacated e1. The algebraic notation for the move and drop would be: Bg3(Me1)

Players have nine opportunities to drop the Ministers, one for each time a piece moves from it's original square. If a player fails to drop a Minister during the initial move of one of the eight initial pieces, the unplaced Minister (or Ministers) remain out of play.

When a player castles, the Ministers may be placed on either the King or Rook starting squares, but not on both. Two moves are required to bring both Ministers into play. 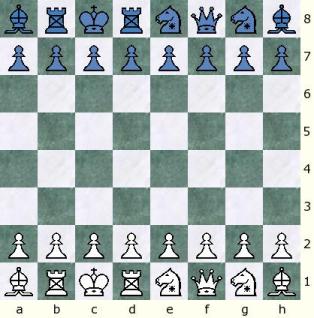 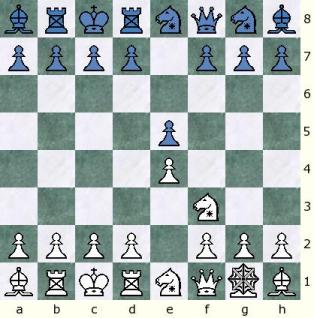 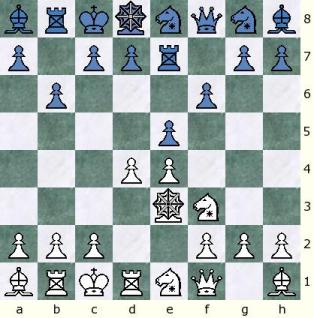 In Ajax Modern Random Chess, depending on the pre-castling position on the castling King and Rook, the castling manoeuvre is performed by one of these four methods: 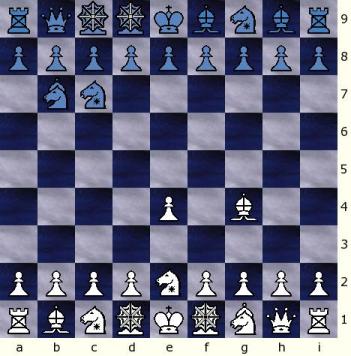 Initially in the Game Courier preset, all pieces (including the Ministers) will be placed in the middle of the board on the 3rd to 7th ranks (above left).