This variant was originally inspired by which coloured images Hans Bodlaender had on offer. Having been unable to produce a full-colour diagram for BacCanCat using those images I decided to try out a variant using as many pieces as could be done in colour. The FIDE gang were all there, of course. One possibility was to add in the Elephant and General images for a variant with an array intermediate between Courier and Courier de la Dama, which I since did as 12 Sharp Chess.

A result of this was to use the Ship image in the way that Ken Franklin did for Leap Chess, for the Alibaba - with the Cannon and Elephant images for its components. As Leap Chess refers to the fact that its year of invention contained a leap day - something that occurs every 16 seasons - that suggested both a name for such a variant and a 4-Seasons-style corner-based array. With so many short-range pieces I quickly realised that Pawns could be dispensed with to save both space on the board and questions of which way is forward. Finally I decided to put in a special area in the middle to unbind the many bound pieces.

The original premise for this variant was obviated somewhat by a more efficient way of presenting a wider range of piece images, including coloured ones. However the changes came at a time that is again entirely appropriate to this variant. I applied the new mechanism to my variants in 2016, the fourth leap year - and of course sixteenth year of all - of the century. 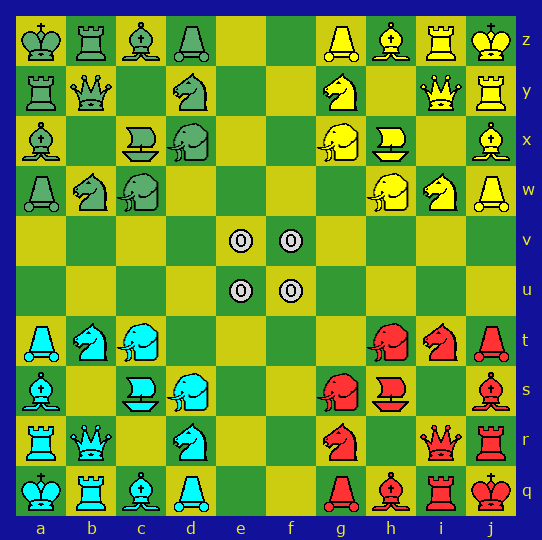 Pieces are a mixture of FIDE and Leap Chess symmetric pieces, with the King common to both. The ship image for the Alibaba is inherited from Leap Chess as it is one of the few non-FIDE images available in several colours even in the larger image set.

The middle 4 squares represent a United Nations Protectorate. Kings may not enter the Protectorate, but any other piece may move as a King within it (i.e., between any 2 of its squares). This unbinds Bishops, Dabbabas, and Alibabas completely, and opens 52% of the board to Elephants. A move must be noncapturing if it includes the middle of any Protectorate square, including an Elephant leap both starting and ending adjacent to the Protectorate.

A player is Checkmated when their King is threatened by the player about to move. That player's pieces are removed. Whichever of the last two remaining player Checkmates the other wins. In a series of games the winner scores 3 and the rest 3 minus the number of other remaining players when they are Checkmated.

The Shogi sets, or directionalised novelty FIDE sets, can be used for a subvariant allowing reintroduction of captured pieces in place of a normal move.

A further subvariant could use a 12x12 board, with 8 Pawns aside in two groups, each moving toward the nearest enemy camp. This subvariant could have a 4x4 central Protectorate completely unbinding Elephants. I hope that you can visualise this board as I prefer not to keep the HTML for it on file!