This family of variants is inspired by the borough of Barnet, historically on the Hertfordshire-Middlesex border north of London, where I have a number of friends. It is most noted for having Britain's largest Jewish community, and one of the largest in Europe. My square-board variant Ecumenical Chess - which has Christian Bishops and Cardinals and Islamic Caliphs - omitted Judaism on the basis that Judaism has many fewer followers than its offshoots, both globally and in many individual nations. I may well be a descendant of one of the Jews in London circa 1800 who changed their surname from Goldmann to Gilman, but if so the family lost its Jewish cultural links in the Midlands until my father began working in London where the surname still carries connotations. Consulting opinions of friends including Julie Rosenfield, who is prominent in the Jewish Vegetarian Society, encouraged me to go ahead with a Jewish-themed variant. I also consulted her on a change of piece name in February 2008. As I know few people outside Britain, Jewish or Gentile, I have chosen a name reflecting the fact.

It occurred to me that a Jewish-themed variant should use hexagonal cells, echoing the angles of the Star of David with its central hexagon where squares echo those of the Christian cross. Changing to a hex board also has the benefit of eliminating the direction of the Bishop in its standard sense. As many hex variants already use a stock set of hex analogues to square-board pieces, I made the Jewish theme an opportunity to introduce curved-path linepieces. These extrapolate from the Rose, whose move comprises up to 6 Knight moves in an "arc" of an octagon. On a square board this piece is harder to extrapolate to radial than to other oblique directions, but on a hex board radial steps separated by 60Â° turns form a reasonable Curved move. This also limits the pieces' overall range, reflecting Judaism's reluctance to proselytise beyond its native ethnic group. My piece article Man and Beast 09: Mighty Like a Rose gives a fuller list of such pieces in all geometries.

Since posting this variant I have added one with Curved and Straight hex linepieces, 4 Linepiece Hex Chess, and another with both of these alongside Hopping-capture pieces, Sinojewish Chess. Armies of Faith 2's Jewish army, and all Armies of Faith 3 armies, inherit the Rabbi and Sennight but not the Finch whose Jewish context is specific to modern England, the Cohen which had yet to acquire that name, or the Dybbuk which is too weak on a hex-prism board. Star of David 2 Level Chess uses a modified form of AOF2's Jewish army, and Flatstar comes full circle by combining pieces from that variant and this one.

As in either Glinski's or McCooey's hexagonal Chess (2- or 3-player in the latter case), but replacing either all straight linepieces (basic variant) or all except the Rook nearest the royally-restricted piece (mixed-bird variant) with Curved ones. The latter option is influenced by the ease of representing the Finch as an upturned physical Rook from a standard Hex or Raumschach set (the latter is usable for Hex variants by treating Bishops and Unicorns as a single type of piece). Other options are COMPACT ANGLOJEWISH CHESS using AJ pieces in the McCooey layout on a board of only 61 cells; ANGLOJEWISH COURIER, using larger armies of more piece types; and TRIOS ANGLOJEWISH CHESS, using larger numbers of the original piece types in the style of Trios Hex Chess. Most can be played with any one of three front ranks, making 21 subvariants. All variants are suitable, and shown, for 2-player variants, but the two 91-cell Glinkski-layout ones are suitable for those as well, with each player having the General on their right. Any variant can use any one kind of Pawnlike piece, put I do not recommend mixing more than one kind in one array.

I have had an idea for designating cells in hex variants generally, and this variant seems a good place to pioneer it. The cell nearest the first player to move is numbered 11. The next nearest cells are numbered 21 on the left and 12 on the right. The remaining cells are numbered by incrementing digits in the same way. As the board has sides of 6 cells length use can be made of the hexadecimal (coincidentally also abbreviated to hex!) digits a and b (although Compact AJ Chess needs just the decimal digits 1-9). This gives the following orthogonals:
(a) the side leading leftward from 11 through 21, 31, 41... to which any orthogonal with a constant second digit is parallel;
(b) the side leading rightward from 11 through 12, 13, 14... to which any orthogonal with a constant first digit is parallel;
(c) the centre line leading forward from 11 through 22, 33, 44... to which any orthogonal with a constant difference between digits is parallel.
Additionally cell colours correspond to the remainders modulo 3. The description of the colourbound piece will give examples. 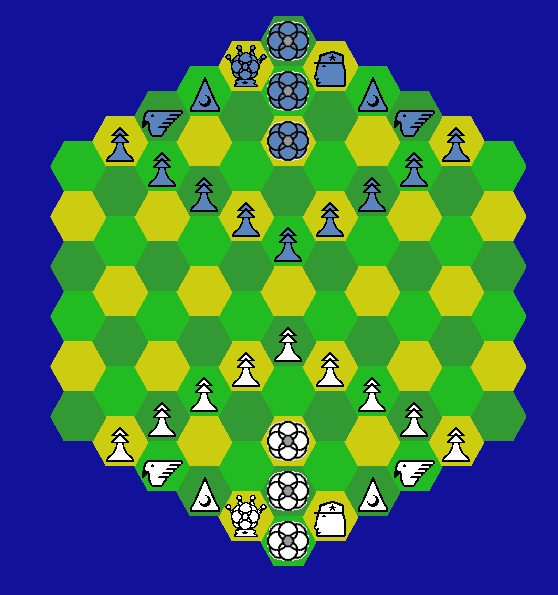 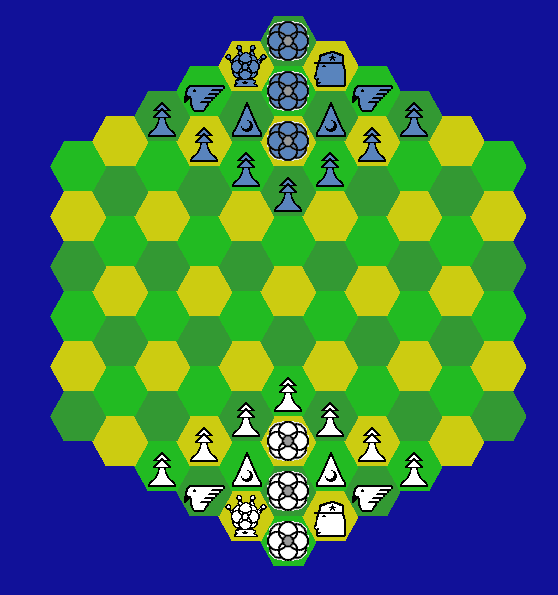 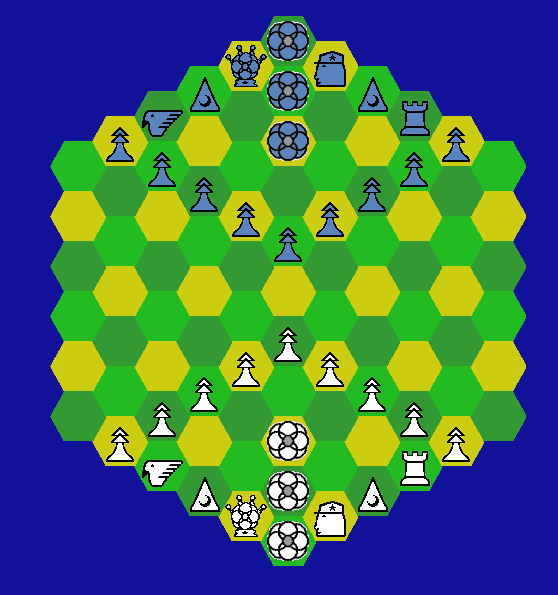 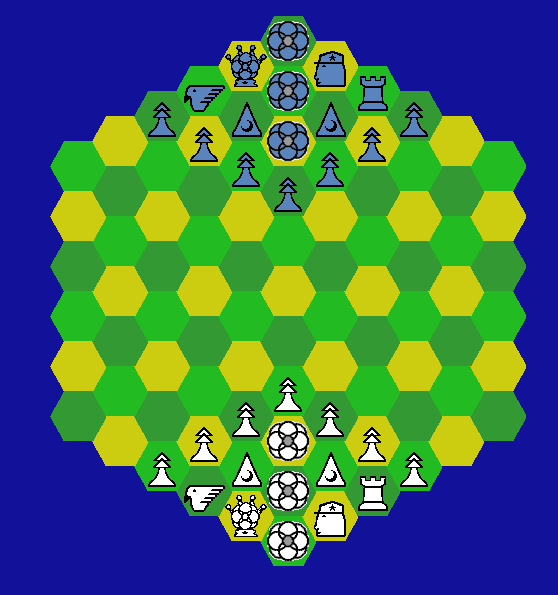 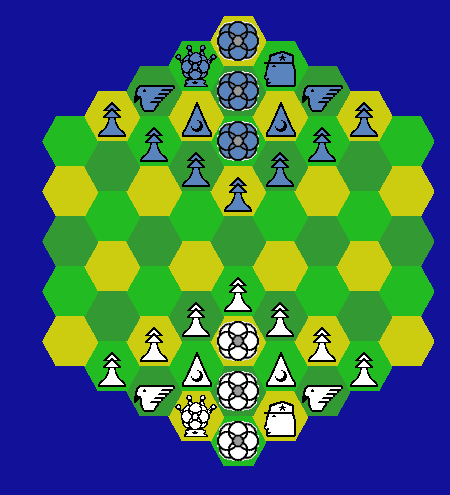 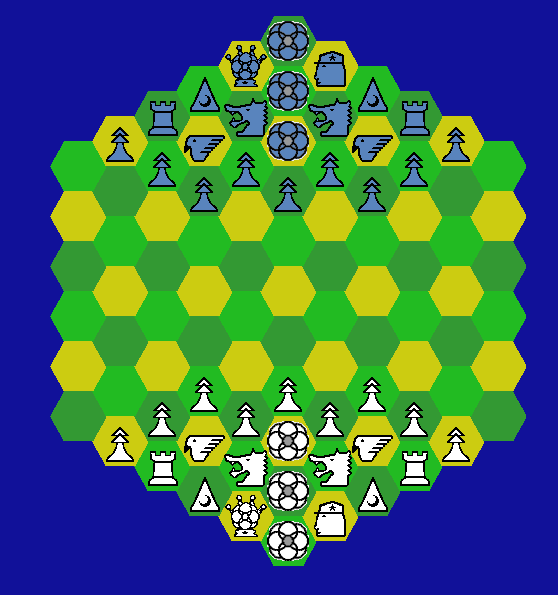 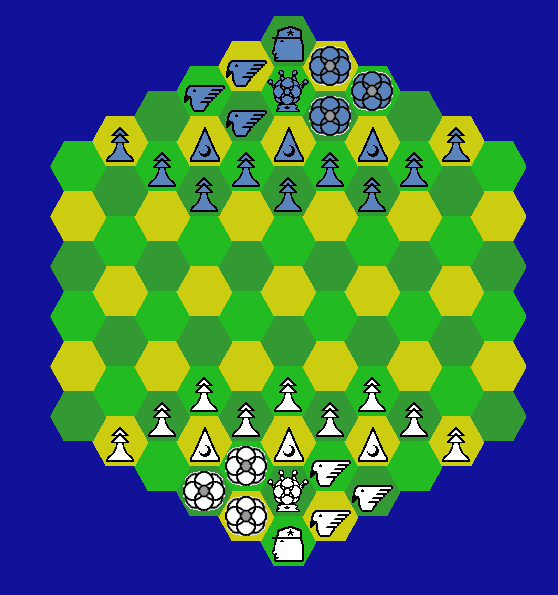 Initial double-step moves are inherited from the same rule in the corresponding Straight-piece variant. If Migrants are used, they can still make a double-step move after capturing on a cell where another Migrant started (the issue never arises for Points or Brokers). En Passant is allowed using the relevant capturing move, unless Points are used in which case it never arises.

Promotion is to any other capturable piece in the same variant's array. There may be circumstances where underpromotion is worthwhile to prevent stalemate, and a Sennight may sometimes pose a more immediate threat than a Curved linepiece. A further set of subvariants, Straight-promotee, would have promotion to Glinski/McCooey pieces instead of AJ array ones, and a still further set also allow promotion of Curved pieces reaching a promotion cell to their Straight counterpart, e.g. Finch to Rook. Given the intention of avoiding Christian nomenclature these follow my suggestion in Man and Beast 01: Constitutional Characters of using straight-piece names based on the triagonal-like move lengths.

In 2-player subvariants Check, Checkmate, and Stalemate are as usual. In 3-player ones a player is Checkmated when their General is threatened by the player about to move. That player's pieces are removed from the game and the game continues with the Checkmating player's move. The player delivering the second Checkmate wins.

This variant's pieces could be substituted for Straight ones in other variants using the latter, for example to give an Anglojewish version of Hexagonal Round Chess.

A third piece with a name from Jewish religious leadership, Levite (see Man and Beast 08: Diverse Directions), is specific to 3d boards and so unsuited to this 2d game.

There is a celebrity connection between this variant's setting and that of my FIDE-board variant Magna Carta Chess, my former home district of Runnymede, as the respective homes whither the comedy writers Dennis Norden and Frank Muir commuted to central London to collaborate. This was a further influence on my devising this family of variants. Their writing can still sometimes be heard on the archive radio channel Radio 4 Extra, as can their participation in the panel games My Music and My Word. The latter show ended with them giving anecdotes ending in a pun on some well-known saying, which they often set in their home areas.

Extrapolating from the Rose is especially appropriate as Rose is, like many colours, common among European Jewry's more northerly branch as a surname or beginning thereof - including the aforementioned Julie Rosenfield. Bordering Barnet on the east is Enfield, which is the rest of her surname. My Barnet friends also include a woman with the forename Rose - and a surname that's a more familiar square-board piece, King!

Not far north of Barnet (but separated from it by Hertsmere) is Saint Albans, setting for a hex variant by the name of Rose Chess. As that variant has its camps along edges rather than at corners, and is connected with a Christian saint (the eponymous Alban of Verulamium, the first British martyr) I decided not to have an AJ subvariant based on its array. That district features in my square-board-with-Rivers variant VeCoTha.

The pieces reversing the noncapturing and capturing restrictions of the Migrant/Broker/Corporal are the Vagrant/Lowlander/Contracorporal. The pieces removing the restrictions altogether are the Superpoint/Count/Sergeant.