Can I move two pawns one step ahead instead of one pawn two steps on the first turn? 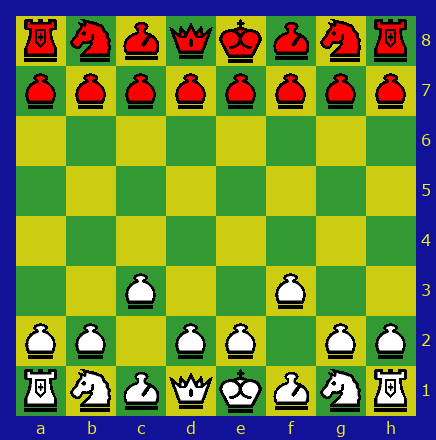 No. This is not allowed. The double move rule allows the same pawn to move two spaces forward instead of just one space on its first move. It does not allow you to move two pawns instead of one. The only case when two pieces are moved in one turn is when castling, but that does not involve pawns.

Is it possible for more than one pawn to make a double move during a game?

We have been told two different things on how a pawn may be moved. Will you please help us clear this up?

Which of these is correct?

2 is correct. Each individual pawn can be moved 1 or 2 spaces.

For example, last week, on the chess club, the game I played started with 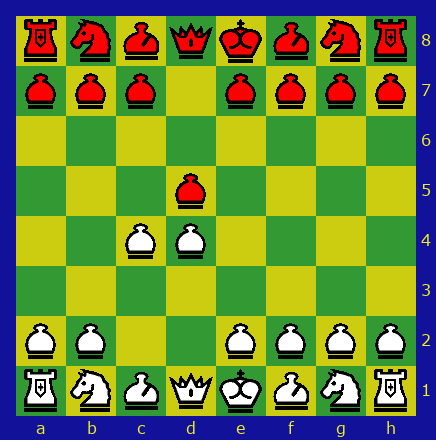 Can the pawn jump a piece when it moves two squares on its first turn?

The pawn may move two spaces only if the first space is empty. So, the pawn may not jump over the knight. 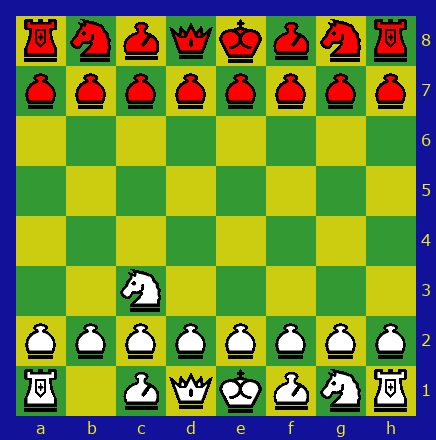 In the diagram above, the white pawn on c2 cannot move as it is blocked by the knight on c3.

Can a pawn move two squares on its first turn and also capture that turn?

No. When a pawn moves two squares on its first move, this must be done without capturing. The pawn's double move is an extension of its normal non-capturing move. Instead of moving to the empty square right in front of it, it moves to an empty square two ranks ahead of it in the same file.

If a pawn is attacking the space in front of an unmoved pawn, can the unmoved pawn escape capture from that pawn by making a double move?

No, it cannot. Chess has a special rule called en passant, which lets a pawn capture a pawn that has just made a double move so long as it can make a diagonal forward move to the space the pawn just passed over while making a double move. This must be done immediately after the pawn has made its double move. 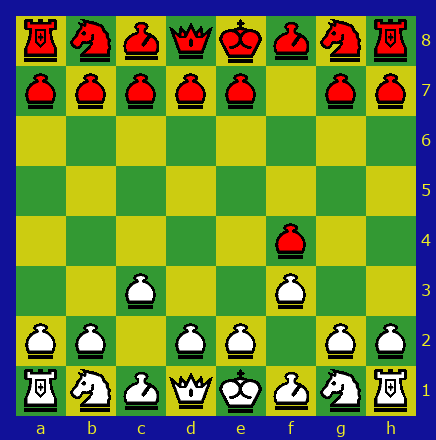 First, the pawn that will make an en passant capture must be in place on the opponent's fourth rank, as the pawn at f4 is here. 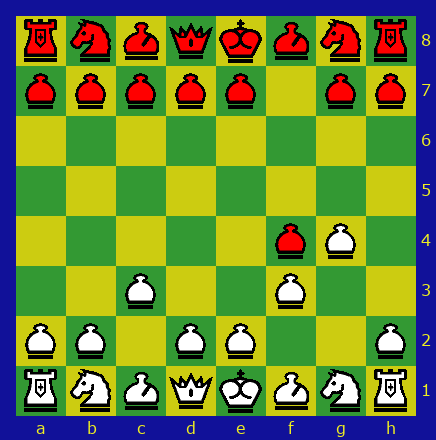 Next, the opponent makes a double move with a previously unmoved pawn to a space that is adjacent to an enemy pawn. Here, white moves to g4, which is adjacent to the Black pawn on f4. 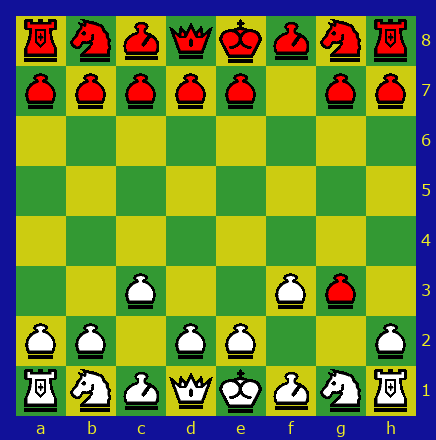 Finally, black may use the very next move to capture the pawn on g4 by moving diagonally forward to g3, the space white's pawn just passed over.

For more on capture by en passant, see the en passant FAQ.

Is it true that a pawn may not capture on its first turn?

No, that is not true. So, if possible, pawns may also capture from the second rank. For example, in the following diagram, which could have happened after the third move by white, black can take the white pawn at g6 with either his pawn from f7 or his pawn from h7. 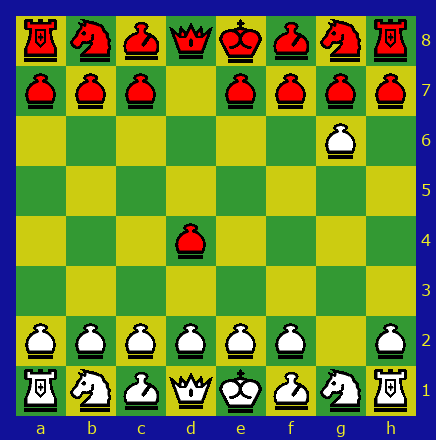 Can a pawn capture a queen?

Yes. Like any other pieces, pawns can capture other pawns, queens, rooks, bishops, and knights; and they can give check to kings.

Is a pawn allowed to make a non-capturing move when it could capture? 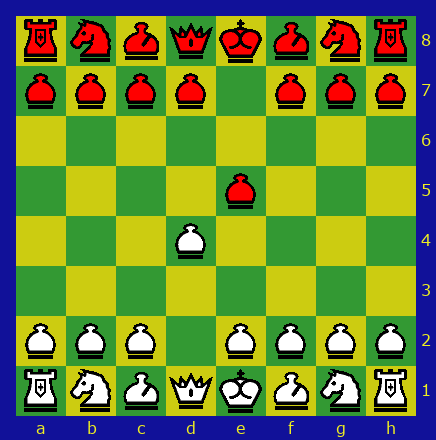 In this position, white's d pawn may capture black's e pawn, but it may also move forward to d5. 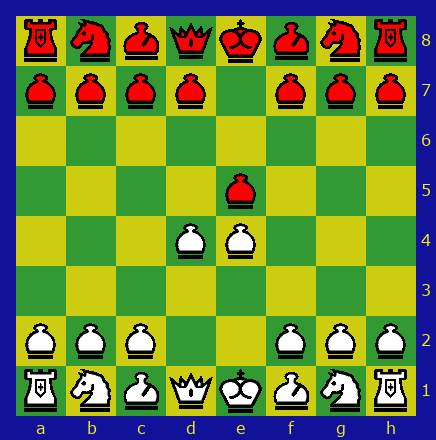 White may even move another piece, as shown here. In this position, black's e pawn is unable to make a non-capturing move, and its only legal move is to take white's d pawn. But black is not required to move this pawn. 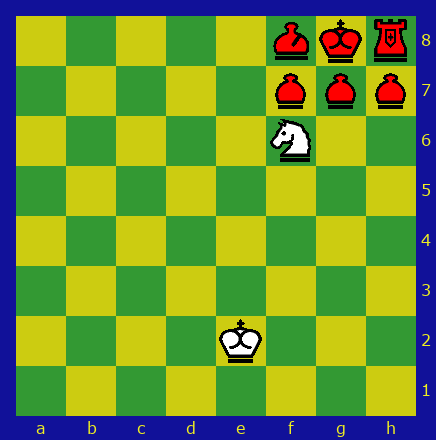 In this position, black's only legal move is to capture the knight with the g pawn. This is due to this being the only move that will eliminate the check on black's king, not to any rule requiring pawns to make captures when able.

Can a pawn check a king?

Yes. A pawn can check a king. See the diagram below. 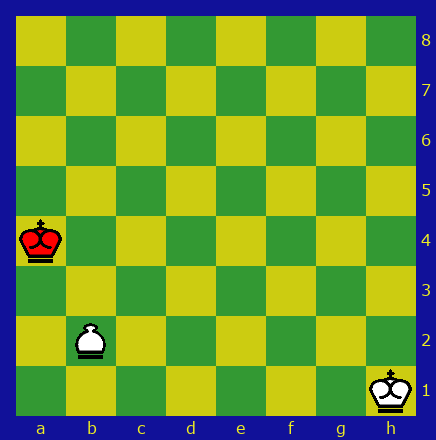 If white plays his pawn from b2 to b3, then black is in check: 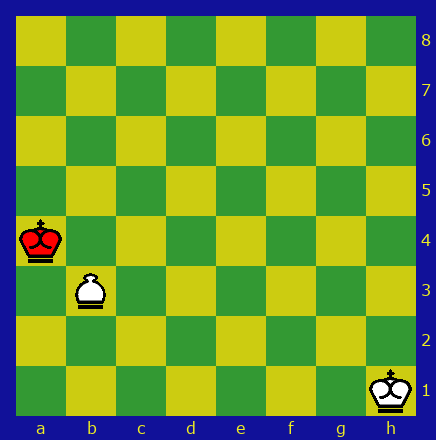 Can pawns take straight in front of them?

No. Consider the following position: 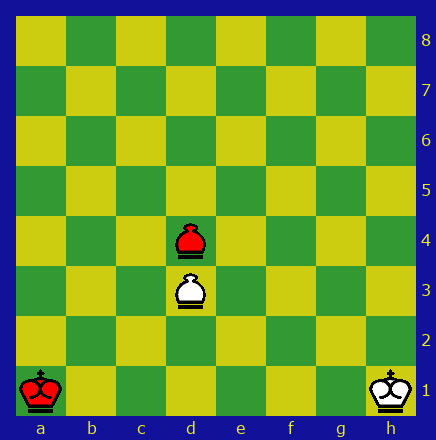 The white and the black pawn can not take each other. Moreover, they can not move at all. (A strategy in this position would be to move the kings towards the pawns, trying to be the first to take the pawn of the opponent.)

What happens when my pawn reaches the other side of the board?

When a pawn reaches the opposite side of the board, it promotes. This means that the owner of the pawn can replace it with a queen, a rook, a knight, or a bishop of his own color, and put that piece instead of the pawn on the board on the square of the pawn. For example, look at the following position. 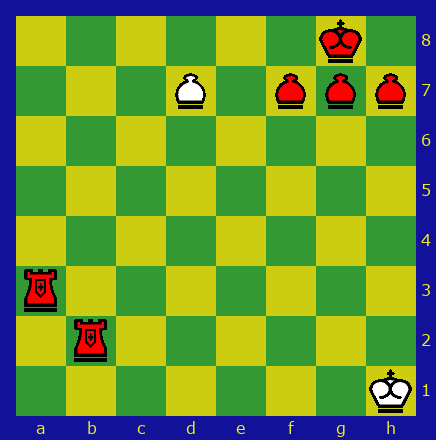 Things seem to look bad for white. Black is ready to checkmate white in one move. But white's pawn is on the 7th rank, and it is white's turn to move. 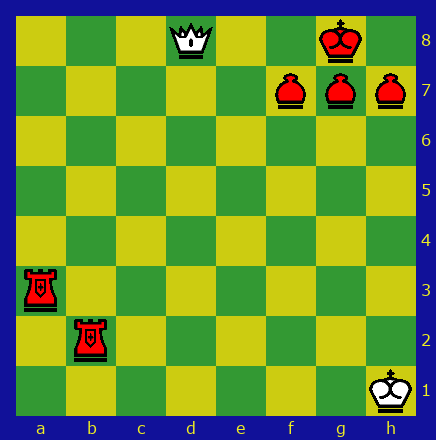 White advances his pawn to the 8th rank and promotes it to a queen, winning the game.

To what pieces can a pawn promote?

Usually, people will choose a queen, because the queen is the strongest piece. There are a few cases where people may choose another piece. 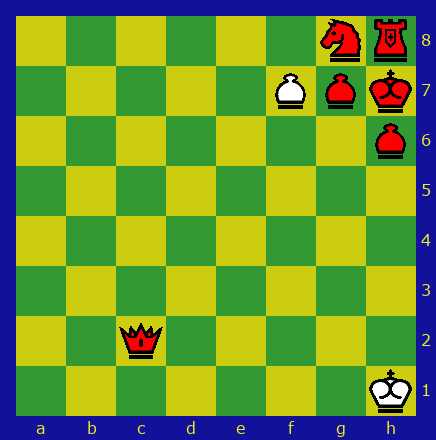 Look at the position above. It is white's turn to move. 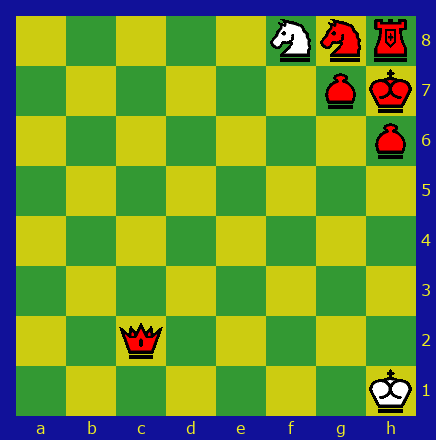 Now, white can move his pawn from f7 to f8, and promote it to a knight, which wins the game by mating black.

Another example can be seen below. 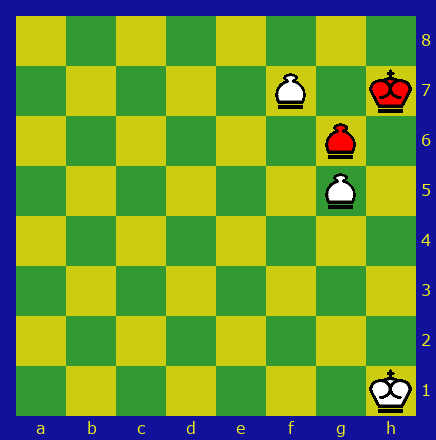 Again, it is white's turn. 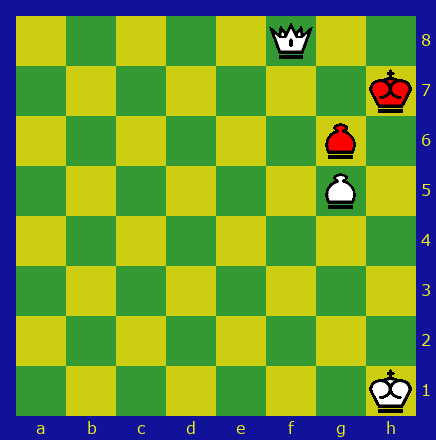 Note that if he would promote his pawn to a queen, it would become a stalemate position, which would be a draw. 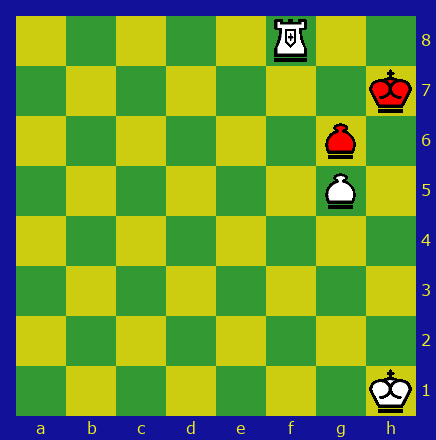 So, instead, white promotes to a rook. The resulting position is won by white when he plays reasonably well.

Can I promote to a piece that has not been lost?

There are many people who think that one can only promote pawns to lost pieces. However, that rule was abolished centuries ago. A pawn can always promote to a queen, rook, knight, or bishop – no matter whether such a piece has been lost during the game. In this way, it is possible, for instance, that a player has more than one queen – this is something I see quite often happen in games played by the children in my local chess club. 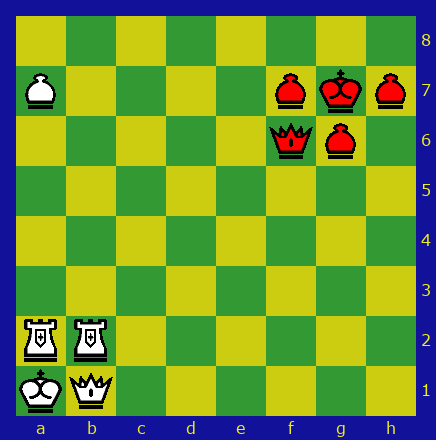 If the pawn on a7 moves to a8, it can promote to a queen, rook, knight or bishop. 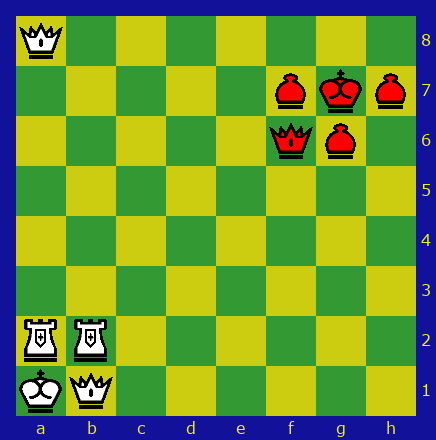 So, if it is white's turn, we can either get a legal position with two queens for white. 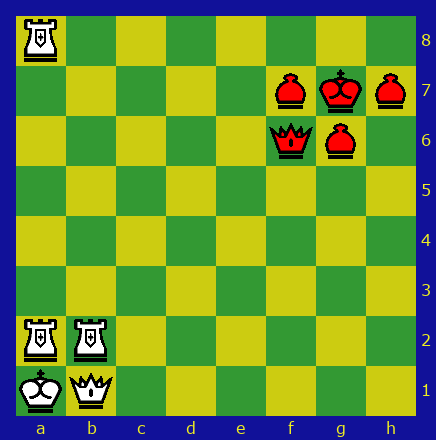 Or we can get a legal position with three rooks for white.

While playing chess my opponent reached the other side of the board with his pawn, and all that he has to choose from is pawns. What do you do?

See above. A pawn may promote to a piece that is not lost. So the player could, for example, choose to have a second queen.

Yes. Moving the pawn and changing it to the new piece happens altogether in one turn.

What happens to the pawn itself? Is it put somewhere else on the board?

The pawn is replaced by the new piece. The pawn piece itself is not put on the board, but goes to the box of pieces. It will not be used until the next game of chess.

Can pieces other than pawns promote?

No, only pawns promote. There are no special rules when queens, rooks, knights, bishops, or kings reach the opposite side of the board.

Can promoted pieces be captured directly after promotion? 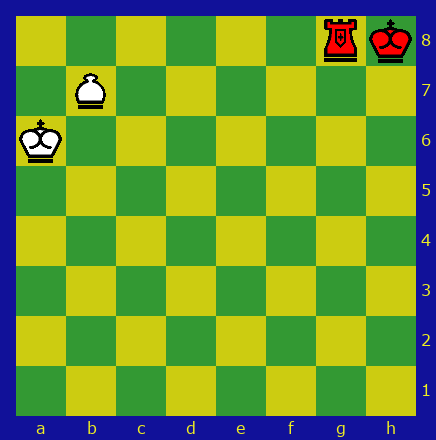 It is white's turn to move. 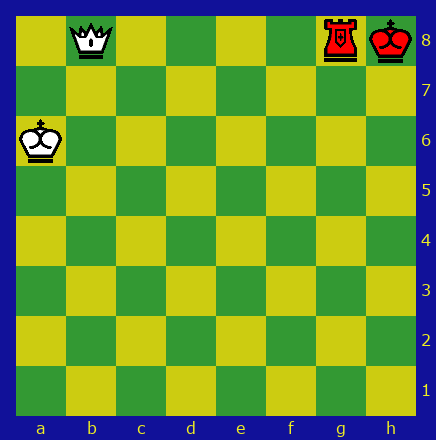 White has moved the pawn from b7 to b8 and has promoted it to a queen. 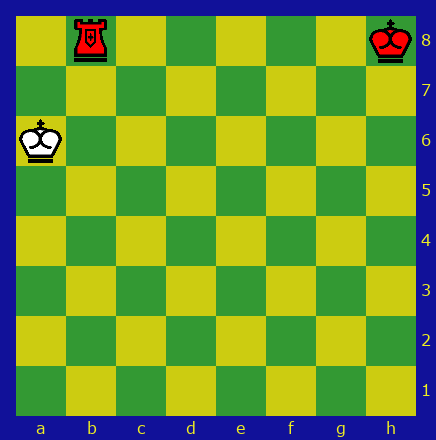 Black immediately responds by taking the queen with his rook.

As a side remark, black should be able to win the game from the resulting position. White would have played better if he first moved his king to a7, where it could protect the pawn. That could force black to exchange his rook for the promoted piece, leading to a draw.