Featuring 34 innovative games and a dazzling variety of exotic pieces on a 10x10 board!

Pick the Piece Big Chess covers a vast number of games built on a 10x10 board with the slots on the a and j files available for a variety of pieces.

The default chess pieces are setup as in orthodox chess, from the b to the i file. Then, different games can be created by using various pieces to fill a1, a10 and j1, j10. Also depending on the game, extra pieces can be added in the back rank and Ninja Pawns to the second rank.

The rules are exactly as in orthodox chess except for: Flexible castling (King can castle by moving 1, 2 or 3 (or 4 on Q-side) spaces towards rook, the ability of pawns to move 1-multiple spaces towards the middle and their asociated extended en-passant rules.

Below is a screen of the main game in the zillions file: 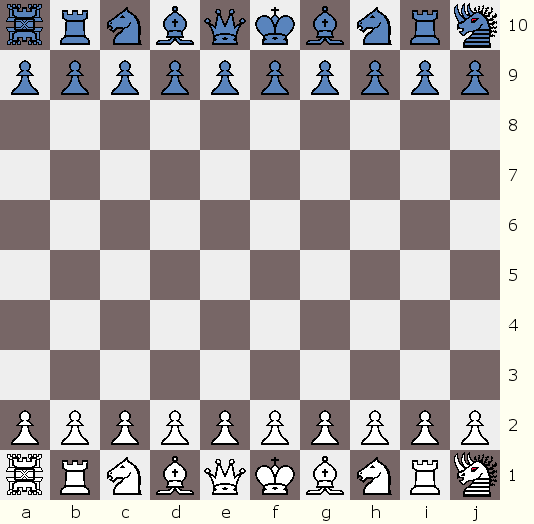 The Ninja Pawns: This special pawn can move/capture like a regular pawn as well as move 1 space sideways. When in enemy territory it also captures 1 space sideways. It can move 1-multiple spaces toward the center and en-passant does not apply. Up to 5 Ninja Pawns can be dropped (1 per turn) to an empty space on the 2nd rank, and you can optionally make the forward thrust in the same turn.

The Pawn: Moves as in standard chess. It can at any time move 1-multiple spaces forward to the center, and thereafter it moves 1 space forward at a time. En passant applies to all cases where a pawn made a double or triple move to bypass an enemy pawn.

All other pieces move as in standard chess. Flexible castling allows a choice of king moves from 1-3 (4 on Q-side) spaces towards the rook, and the rook ending up next to the king on the other side.


There are 33 more subvariations in this zillions file!
Carnage! - This exciting game starts off with a Dragon on a1 and a10 and a Terror Freeze on j1 and j10. During play each side can drop one Detonator into any vacant space on the back rank. The drop uses a turn.
Super Power Arms Race - Featuring the Ninja Warrior Bishop and Ninja Guard Rook, and each side can drop one Chancellor (Rook-Knight) and one Archbishop (Bishop-Knight).
Capablanca Game game uses the familiar Chancellor and Archbishop
The Terror Campaign also starring the Chancellor and the Archbishop - introducing the Terror that moves like a queen or knight but cannot capture Pawns, Ninja Pawns, Knights, Bishops or Rooks.

All this and many, many more! For more info on the games in this package see the game/piece description or go to: http://chess.computerwebservices.net/pick2.php