One thing I noticed regarding Chess with Different Armies is how the 3 new factions have a multitude of leapers (the colourbound cobblers is nothing but leapers!) but all 4 factions have unlimited range Queens. I opted to subvert both of these trends by using Chu Shogi pieces (including a toned down version of the famous Lion) to give this army a slow but powerful Queen and 4 pieces that can't jump while capturing. 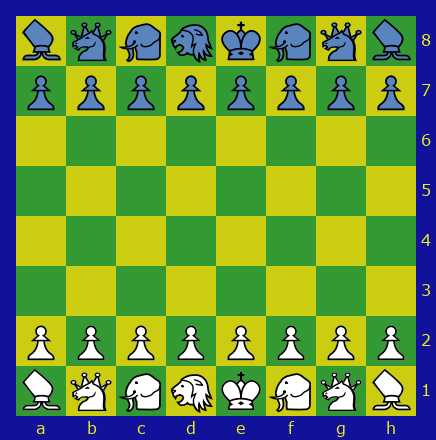 In the Bishops' starting places are (sober) Elephants (FA) which move up to 2 spaces diagonally, ignoring any pieces in their way. The elephant is the only piece in this army that cannot checkmate a bare king with assistance from the friendly King. Text notation: AF

In the Queen's place is a Lioness (KNAD) which can move to any space in a 5x5 box with it's current position in the middle. Like the Elephant, it moves directly to its destination, ignoring any pieces in its way. A lioness can checkmate a bare king without assistance from the firendly King, making her a menace in the endgame. Unlike her Chu Shogi inspiration, the Lioness can't perform double or rifle captures. Text notation: LS

There are no rule changes from Chess with Different Armies.

The power of forward moves

One interesting thing about this army is how weak the Diving Whale is when compared to the White Horse, even though it's movement capabilities seem strictly better (a Diving Whale can dive, while a White Horse cannot). This is because a Diving Whale is incredibly hard to develop, being forced to move in a single direction (straight forwards) to get into the action, and unable to move sideways along the back rank outside of castling.

If it weren't for the ability to dive, one would need to push a pawn to the fifth rank just to get the whale in front of its own pawns (which is why I gave the Diving Whale its dive ability)

On the other hand, a White Horse has 3 ways to get into the action, slipping past friendly pawns to deliver devastating forks by attacking 3 back rank squares at once! Meanwhile the backwards Rook move, although limited in direction, has unlimited range and is therefore usually more than good enough to get the White Horse out of trouble.

That said, in the endgame where the board is more open and being able to develop becomes less important, the Diving Whale becomes much more powerful while the White Horse gets slightly weaker.

The power of the Lioness

The sheer density of the Lioness's moves allow it to exploit even the smallest holes in the enemy camp to brutal effect. LSh6# is a common threat against castled Kings if one can force the enemy g pawn to move. A tactic of this kind is shown below: 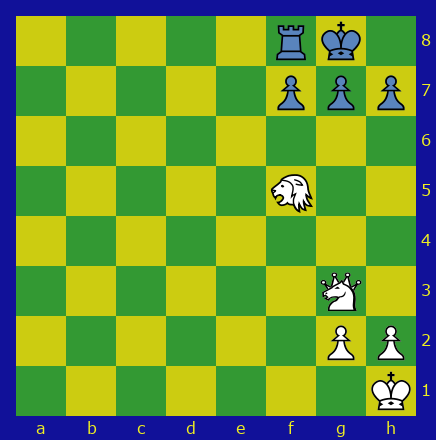 In this case, the only way to stop WHxg7# is by pushing the g pawn, which allows LSh6#.

Like the FIDE knight, the elephant is simultaneously a leaper and the least valuable piece in the army. This makes developing them to the middle of the board early a priority.

As the diving whales are very strong in the endgame, developing the white horses first despite them being stronger can be a smart move in some positions. Especially as you need to get them out of the way before castling!

A lioness on e3 covers a lot of important squares while not being too vulnerable to attack. However, doing this against the Colourbound Cobblers is ill advised because they can play BDh6.