Following Armies of Faith 2 my pre-existing 2d hex variant Anglojewish (AJ) Chess inspired me to add a simpler variant using each kind of AOF2 army - a square-cell 2d one for Guru Mahachaturanga and a cubic-cell 3d one for Heathen Europe Chess. This served as a reminder that AJ Chess itself has - and can have - neither the Knight nor the Pawn from the enduring mainstream of Occidental pieces. A variant using more or less - as the AOF2 Fortnight ultimately proved unsuitable - the AOF2 Jewish army now brings me nearly full circle. My subsequent combining of pieces from this variant and AJ Chess in Flatstar completes the process.

Unlike the European and Indian armies this still required a hex-prism board - hex for the Rabbi and Sennight and square for the Knight and Pawn - so I kept the 3d element to a minimum by having just 2 levels. This meant hex boards as levels, even at the cost of binding Knights to 1 in 4 columns each, as the alternative would make Rabbis too weak. The next question was what exact shape the levels should be, and one possibility fitted the theme perfectly: two triangles pointing in opposite directions, the central hexagonal areas overlapping to form a 2-level version of the AOF2 Drum to which Knights were further confined. The two overlaid form a Star of David shape, especially if you notice the edges of one level through the other, and the David in question was of course a King, a piece distinguishing this variant from AJ Chess.

As the Fortnight would be unwieldy a piece within the tiny 74-cell Drum I decided to substitute a different piece type, choosing the Cohen of AJ Chess. Ultimately I developed two variants as another piece for which I had settled on a name, the Sling, especially suited the theme. The Cohen and Sling appear together in a later 2d hex variant of mine, Sinojewish Chess. Piece density here is quite high - 6/11 and just over 3/5 - but this reflects the weakness of many of the individual pieces. I do not recommend one army against the other.

Since these variants I have added a similar one on an even larger pair of triangles with all the pieces here and others, named Megastar of David in allusion to its size and range of pieces. 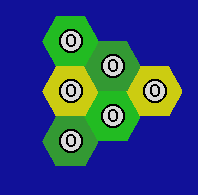 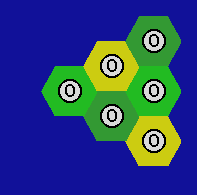 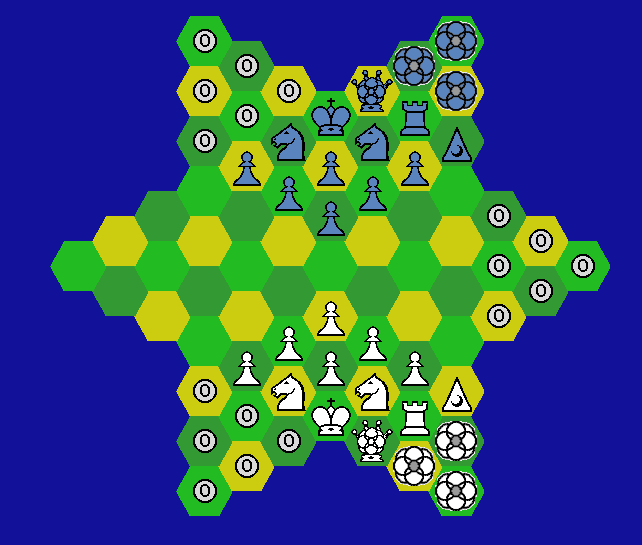 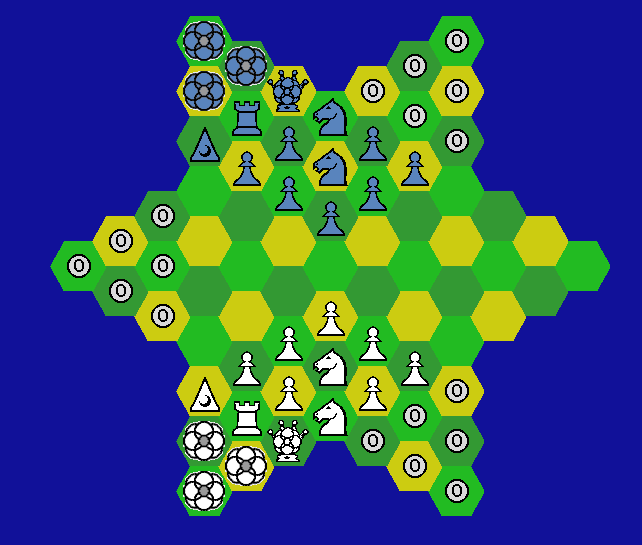 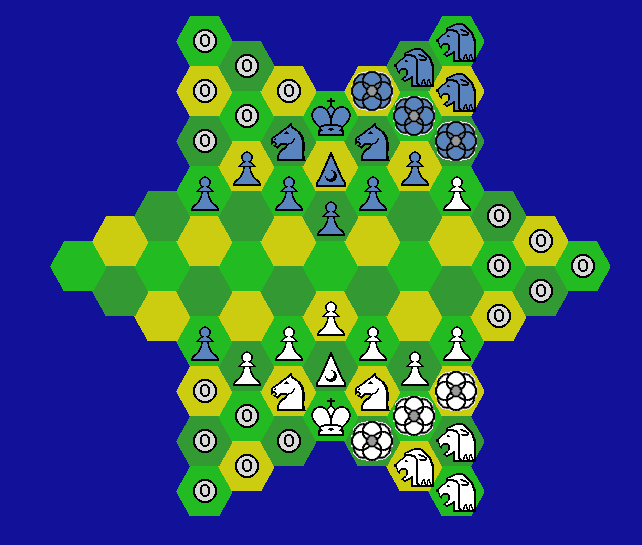 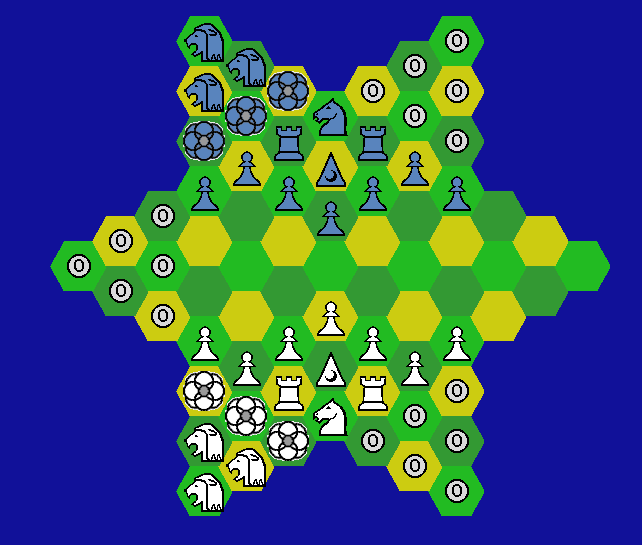 Pieces constant in the Occidental game and so in every army in AOF and its offshoots: Jewish-specific pieces:

A Pawn has an optional initial double-step noncapturing move if and only if the move is through another Pawn's starting cell. It can be captured En Passant by enemy Pawns, even ones to which no double-step move was ever available.

Pawns with no further move within the Drum, even if they would otherwise be able to leave it by a noncapturing move, must be promoted to any other capturable piece of the relevant array.

2 identical FIDE sets can just about represent CSD2L's 30 pieces aside using the desperate measure of a three-Pawn cluster on the same square representing a King. The physical Kings and the Bishops can then represent Rabbis, Queens Cohens, inverted Rooks Sennights, and the rest themselves. SSD2L's 34 aside give a slightly better excuse for using 2 large and 1 small FIDE sets: Bishops of both sizes as Rabbis, small Knights as Sennights, small Pawns as Slings, and other large pieces as themselves. An alternative is to use 2 Shogi sets for either:

The Cohen is a compound of the Rabbi and another AJ piece whose name of Finch is specific to modern English Jewry and so not especially suited to AOF and its offshoots. Whether the Cohen would make a better AOF2 Jewish King's Partner (and promotee for all armies) than the Fortnight is a question on which I welcome feedback. It would mean lifting the ban on compound capturable pieces, and so raise the question of what other rejected pieces might be reconsidered.

Note that the variant with the Sling does not use the pieces from which it is extrapolated. In the Cannon's case this is because it is thematically anachronistic, in the Arrow's because it requires longer root-2 diagonals than the board offers.