Shatranj Darwinian, Â© December 2005 by Gary K. Gifford This game popped into my head a few days ago while I watched a movie which included Middle East scenery. It is logical to assume that the following three items fueled the creative process: (1) My recent Chess Variants Tournament game of Shatranj, (2) my Shatranj of Troy creation, and (3) my playing a â€œtest gameâ€ of Joe Joyceâ€™s Grand Shatranj. In addition to having a Shatranj character it employs the concept of evolution to pieces currently used in orthodox chess. Because of the evolution aspect, however, I did not restrict the evolving pieces to the â€œArabic/westernâ€ path chess took, but allowed for the evolution of the Chinese Cannon (related to Rooks, War Engines, and Wazirs). I also allowed a Ferz to be retained, as we see the piece today restricted in the palace of the Xianqi (Chinese Chess) board. But you may ask, why allow for these Chinese pieces? What about Japanese pieces (Shogi)? I will answer those questions in the â€œNotesâ€ section of this rules page.

Object of the Game: Checkmate your opponentâ€™s King. You can also win by forcing resignation and by â€œBare King.â€ Bare King, which is present in Shatranj as one of the possible winning conditions, occurs when you have taken your opponentâ€™s last piece or pawn, i.e., only his King remains. However, if his King could then take your last remaining piece or pawn (bearing your King) the game is Drawn. Detailed Movement and Promotions: 1)Wazirs â€“ Move horizontal or vertical, 1 space. Upon reaching your third rank (or higher) you can promote a Wazir to a War Machine (Dabbaba). 2)War Machines â€“ Evolve from Wazirs when a Wazir reaches the third rank (or higher). War Machines leap over one Square horizontal or Vertical to land on a space two squares away. They are like orthogonal Elephants. Upon reaching the 5th rank (or higher) you can promote a Wazir (or a War Machine) to either a Rook or a Cannon. However: You are limited to two promotions to Rooks; and two promotions to Cannons. It does not matter which two evolve into Rooks or Cannons. Note that War Machines can be on the same color squares. 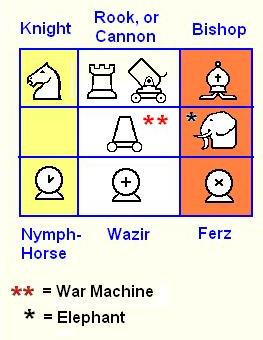 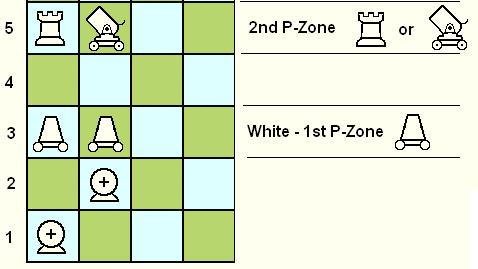 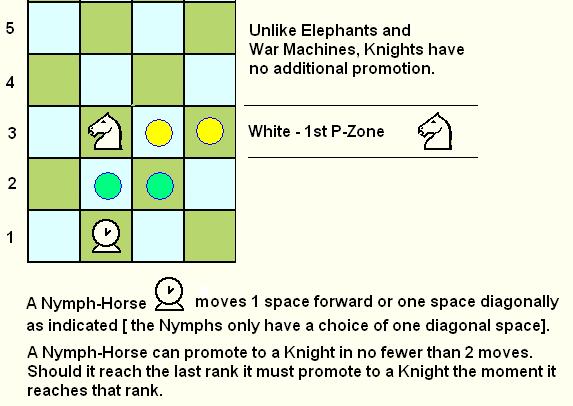 6) Knights â€“ Evolve from a Nymph-Horse. Move as in western chess. 7) Ferz â€“ (see following figure). Move 1 space diagonally, any direction. Capture by displacement. Upon reaching your third rank (or higher) you can promote a Ferz to an Elephant. However: You are limited to two promotions to Elephants. The remaining two Ferzs must remain as Ferzs and cannot promote (even if the two Elephants were captured). It does not matter which two evolve into Elephants and which two remain as Ferz. The notes section contains more information regarding the Ferz concepts.

In the above diagram we see a Ferz on the first rank. On its move it could go one diagonal forward (green dots). On its following move it could go to the third rank where it could promote (evolve) to an Elephant. The Elephant (which moves as in Shatranj) can promote to a Bishop when it reaches the fifth rank (or higher). 8) Elephant â€“ Evolves from a Ferz when a Ferz reaches the third rank or higher. Moves as in Shatranj. That is, they leap 1 space diagonally in any direction. Capture by displacement. Can evolve into a Bishop upon reaching the 5th rank or higher. Elephants can be on the same color diagonal. 9) King â€“ As in Western chess. There is no castling. A King cannot move into check. "Bare King" condition [found in Shatranj] applies. It occurs when you have taken your opponentâ€™s last piece or pawn, i.e., only his King remains. This wins unless his King could then take your last remaining piece or pawn (bearing your King) the game is Drawn. 10) Pawns â€“ Pawns are like western pawns, but without an initial double-space move option and therefore without pawn-enpassant possibility. Pawns, upon reaching your last rank, must promote to a Knight, Rook, Bishop, or Queen. 11) Queen â€“ A Queen can appear on the board should a Pawn promote to one. You can have more than one Queen. The Queen represents the last of piece evolution in Western Chess as it is played today.