This page is written by the game's inventor, Nick Wolff.

I created Royal Rumble way back in the day when I was first a part of this site, but had forgotten about it completely. Vitya Makov and Carlos Cetina are the real masterminds of the game, here. I hadn't created any rule pages or even submitted a preset, so that is the intent of this. I've made a few slight modifications to the game from then to now, namely taking out the board that had a FIDE King with Berolina Pawns and replacing it with a board with the Lion from my Wild Kingdom game with regular pawns. I also switched a few pieces here and there. Nothing too noticeable. 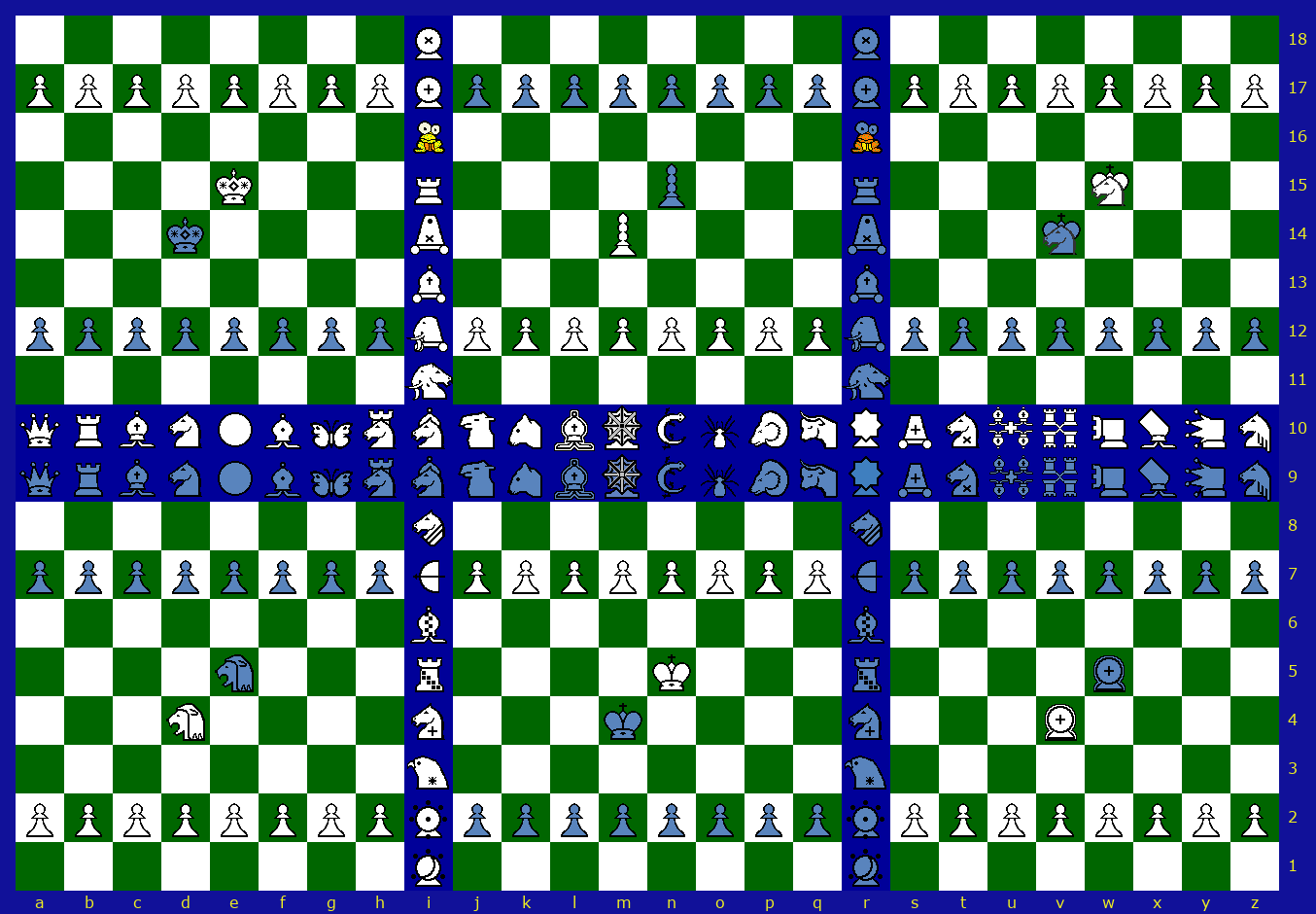 Royal Rumble consists of a total of 6 boards. At the start of the game, all the pieces but the pawns and the Royals are off of the board. The game randomizes the starting position for the Royals on each board and then randomly divides all of the remaining pieces amongst the six boards. Each starting array, though random in pieces, is setup in mirrored symmetry instead of random, in order to promote fair play between the boards.

The preset for the game can be found here.

FIDE King - Moves and captures just like a King in a regular game of Chess. May not move into check.

Eques Rex - Moves and captures like a King in a regular game of Chess, but also has the added movement of a Knight. May not move into check, but may leap through it.

Royal Wazir - This piece is from Chinese Chess. Moves one space orthogonally. May not move into check or "face" the opposing Royal Wazir in any unobstructed, orthogonal direction.

Wuss - The Wuss moves like a FIDE Queen. It cannot capture and if put into check, it can only move out of check. This means that no other piece can block the check or capture the attacker. The Wuss can move through check to escape check. Please see the below rules section for additional restrictions on the "Wuss Board".

Maorider King - From the mind of Vitya Makov. The Maorider King moves as a FIDE King, but does not capture. It retains its Recruitment ability from MaoRider Chess. It also immobilizes any enemy piece that starts its turn next to it. Please see the MaoRider Chess rule page for detailed rules on the Recruitment process. It may not recruit if immobilized, but may still immobilize other pieces.

Pawn - Moves just like a Pawn in FIDE Chess, to include En Passant and the Double Step. When it reaches the last rank of the board it is on, it may promote to any non-royal piece from the starting position of the game board in which it is on.

FIDE Pieces - All pieces from FIDE Chess move and capture just as in a regular game of Chess.

Dababba - This piece is not in Royal Rumble, but for simplicity in explaining other pieces, I have included its movement. Jumps to the second square in any orthogonal direction. May leap over any intervening piece.

Alfil - This piece is not in Royal Rumble, but for simplicity in explaining other pieces, I have included its movement. Jumps to the second square in any diagonal direction. May leap over any intervening piece.

Ferz - Moves one space in any diagonal direction.

Wazir - Moves one space in any orthogonal direction.

Poison Dart Frog - Taken from my Wild Kingdom game. Due to the differences in the games, the PDF does not have its "Sticky Tongue" ability nor its "Poison Dart" ability. It retains its "Leap Frog" ability and does not have mandatory captures at all. If it uses the "Leap Frog" ability, it may leap through immobilization from the Immobilizer (see below) and the MaoRider King, but may not move if it starts next to one of those enemy pieces. Please see the Wild Kingdom rule page for a detailed diagram and description of the Poison Dart Frog.

Half Rook - Moves as a Rook, but may only move a maximum of 4 spaces.

Copycat - From my Mimic Chess. May move as, and use the abilities of, any piece that it starts its turn adjacent to.

Picket - Moves as a Bishop, but MUST move at least 2 squares. From Tamerlane Chess.

Butterfly - Moves up to twice as a Knight, but MUST leap over a piece each time. This piece can either be in an orthogonal or diagonal direction from the Butterfly.

Camel - 1:3 Leaper. Moves 1 spaces in any orthogonal direction, then 3 spaces at a 90 degree angle outward from there. May leap over intervening pieces.

Squirrel - From Vitya Makov's Squirrel Chess. It is a 0:2, 1:2, or 2:2 Leaper. Moves 0-2 spaces in any orthogonal direction, then 3 spaces at a 90 degree angle outward from there. May leap over intervening pieces. It also has a Piececlopedia entry located here.

Billiards Bishop - Moves as a Bishop, but may bounce off of the edge of the board and continue moving.

Sissa - Invented by Carlos Cetina. Moves either as a Rook or Bishop and then must move the same amount of squares as the other. See Sissa in the Piececlopedia.

Chameleon - Captures as the piece it is capturing. If it isn't capturing, moves as a Queen. May also use the abilities of pieces against them (for example, may immobilize an immobilizer or recruit a MaoRider King. It can swipe a Lion, but only if the Lion is the only piece captured).

Immobilizer - It moves as an Orthodox Queen but does not capture. An enemy piece standing adjacent to an Immobilizer may not move while the Immobilizer is present. Black and white Immobilizers, occupying adjacent squares, are each frozen until the other is captured. An immobilized piece other than a King may 'commit suicide' by removing itself from the board (usually to open a line of attack). This counts as a move for the player removing the piece. The Immobilizer may never move to an occupied square.

Guard - Moves as a non-royal King.

Aanca - Moves one square orthogonally and then slides like a Bishop.

Gryphon - Moves one square diagonally and then slides like a Rook.

Cannon - Moves like a Rook without capturing. In order to capture, it must move like a Rook and jump over 1 intervening piece. It captures by replacement.

Vao - Moves like a Bishop without capturing. In order to capture, it must move like a Bishop and jump over 1 intervening piece. It captures by replacement.

Mao - Moves as a Knight but cannot leap. It must first move in an orthogonal direction before it moves diagonally.

MaoRider - Moves as a Mao, but may continue moving in the exact same direction indefinitely.

Archer - Moves as a Queen without capturing. Captures by "shooting" an enemy piece 1 or 2 spaces away in a diagonal or orthogonal direction. The Archer does not move from its square when it captures.

Crooked Rook - Moves as a Crooked Bishop, but instead of moving diagonal, it moves orthogonal.

Ajax Falcon - This piece was created by Jose Carrillo for his variant, Ajax Falcon Chess. Please see his rules page for detailed description and diagram of movement. Please note that this is not a Falcon from Falcon Chess.

Gold General - Moves as a Gold General from Shogi, but is not pocketed upon capture. Moves one space in any orthogonal direction or diagonally forward.

Silver General - Moves as a Silver General from Shogi, but is not pocketed upon capture. Moves one space in any diagonal direction or orthogonally forward.

Each game board is played utilizing standard FIDE rules, except that the pieces are different and moved according to their descriptions above. There is no castling of any kind on any board. Each turn, each player moves one piece from each board, with the exception being on the first turn - the first player only moves on the 3 boards that they are playing as white.

When a checkmate occurs, all of the pieces on that board are removed and the winner's Royal piece is placed in the center to signify a victory. The person who wins 4+ boards is the winner. In the case of a 3:3 draw, the person who achieved their 3rd win first is the winner. In any case, all 6 boards may be played to completion, even if one player has achieved 3 wins, but it is not mandatory.

Special thanks to Carlos Cetina for programming the preset (even though I canabilized it) and to him and Vitya Makov for their help with the rules and pieces of this variant. Thanks to both of them and Jose Carrillo for allowing use of their pieces in this game.