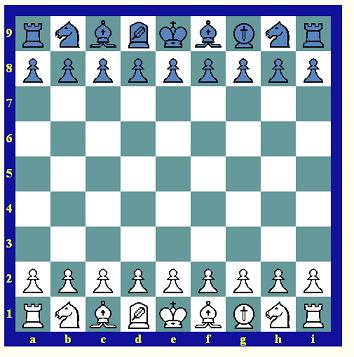 Initial Setup for the Original 9 x 9 Variant Remote Sensing, (c) July 2006 by Gary K. Gifford. I got the idea for this game from my awareness of Remote Sensing and Remote Viewing and a discussion with Jeremy Good regarding problemist David L. Brown's orphans, mimic, and mime style pieces. Brown created these in the 1970's. The Remote Sensor pieces are closely related to Brown's Hero piece, but can only mimic pieces that are on squares of their resting square's current color. I have added a little more about Remote Sensing in the notes. To my knowledge, Remote Sensor pieces exist in no other game at this point in time.

As in the above diagram. d1 and d9 are starting squares for Remote Sensor Friendly (RSF). The feather in the piece to represent - friendly. f1 and f9 are starting squares for Remote Sensors Enemy (RSE). The dagger in the piece to represent - enemy. Note: If you would like to play Remote Sensing on an 8 x 8 board, the setup is as in the following diagram. Also, please refer to the 8 x 8 note in the Notes section which includes instructions for castling in the 8x8 variant. 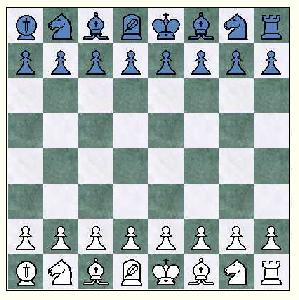 Initial Setup for the 8 x 8 Variant 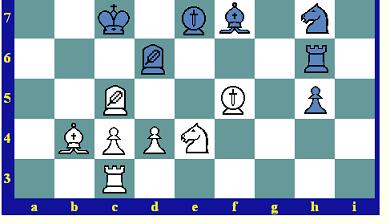 Remote Viewing is a technique reportedly developed by parapsychologists at the Stanford Research Institute. Remote Viewing supposedly allows users to perform acts of clairvoyance. Theoretically, the phenomenon involves projecting consciousness to remote locations. There are reports of government and military experiments in this area. Remote Sensing is the science of obtaining information about something without being in contact with it. It pertains to the detection and measurement of, for example, light, thermal energy, and radio waves using appropriate electro-magnetic detection equipment. In the Remote Sensing game, the Remote Sensors are detecting pieces on squares that are reflecting light in the same light spectrum that the sensors currently reside on. The sensors can then mimic the movement of what they are detecting.