These variants are an offshoot of my 125% Xiang (&c) Qi but on a smaller and more regular-shaped board without the concavities raising the one-foot-in-the-grave question. They could be thought as being to Patrick Riley's 4 Armies what the 125% variants are to my Fivequarters. The page title is based on the idea of two rivers descending from two hills, mingling at a pass, and then diverging down both valleys. Which stretches are upstream and which downstream is immaterial to the game.

As with 125% variants, rules applying to the one River in 2-player variants apply only to certain Rivers. I have since applied this rule further in my 9-rank 2-player variants Gnu Qi, Caliph Qi, and Tor Qi. Because the rule is normal to these Xiang Qi offshoots I have included Pass Variants based on these. I have also thrown in one based on Fergus Duniho's excellent Yang Qi, inheriting its lack of any Rivers but also a notable feature of its own. The array for the Xiang-Qi-based variant can of course be used for a Pass variant based on Alibaba Qi, and have the Cannons removed for ones based on pre-Cannon Xiang Qi and some of my variants thereof.

When first posting this page I decided that ideally individual games would be named after 2d versions, replacing the Qi in the 2-player game's name with a Chinese word meaning a pass between hills. According to Wyatt van Dyke the best approximation to this is Aikou, and while to many European ears (including mine) this would have a superficial similarity of the verse form the Haiku inspiring my Haiku Shogi and appearing as a piece name in Man and Beast 18: Complex Pieces with Simple Ratios I can see that there is no genuine linguistic connection. In any case, this page does not consider Shogi due to the issues of part-symmetric pieces in a corner orientation. I have therefore decided to go ahead with use of this word. 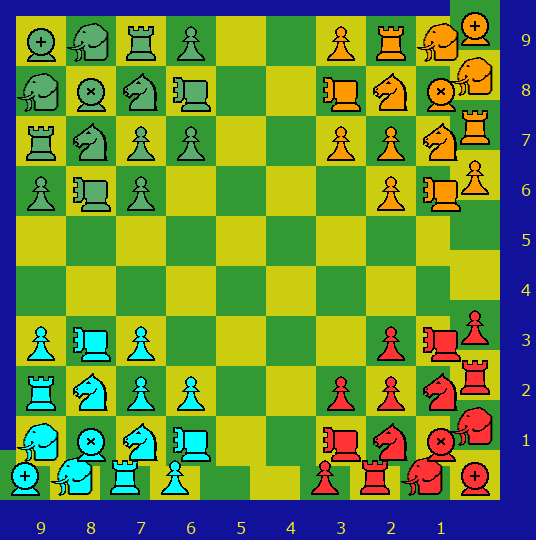 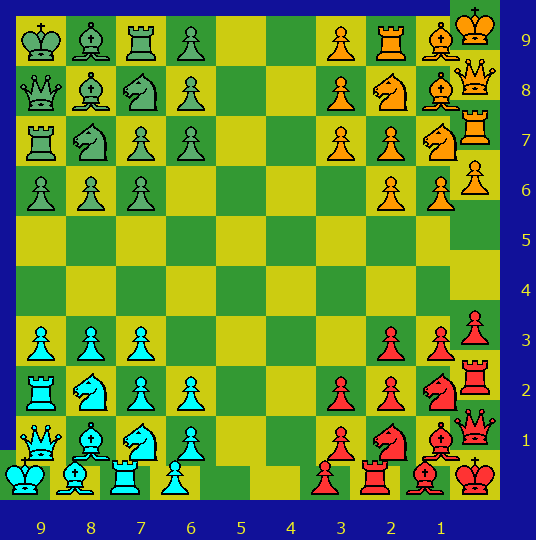 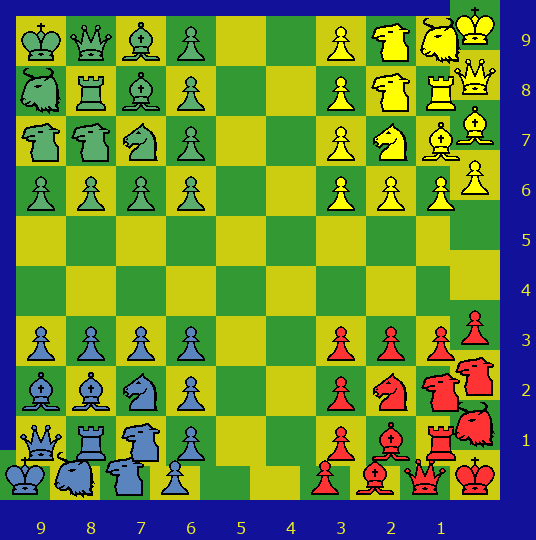 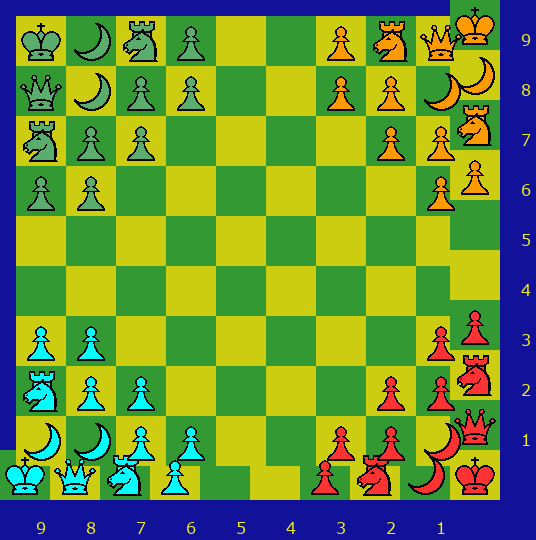 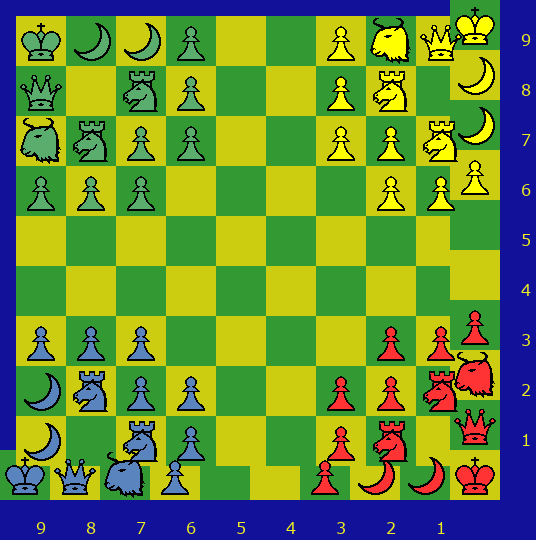 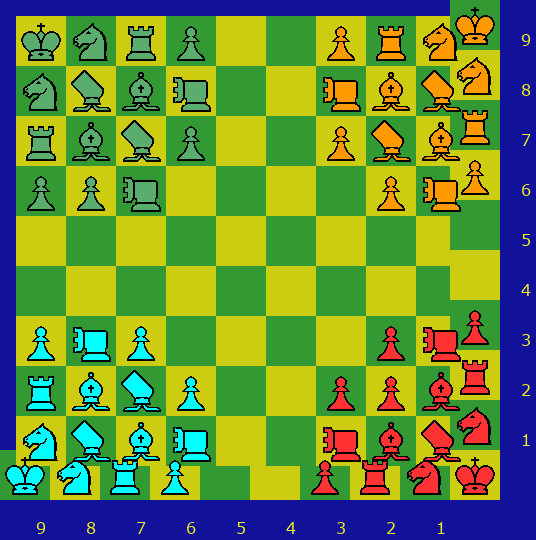 The last counters colourbinding with King swaps - with any piece except a Pawn - and has no River effects, but adds Arrow threats between opposite players corresponding to Cannon ones between neighbours.

Pieces are the same as in the corresponding 2-player and/or 125% variants. For Pawns and their Oriental counterparts, forward is interpreted as being toward the nearest all-enemy edge of the board. Those starting on a long diagonal can head for either all-enemy edge but having moved toward one must continue toward it until they cross a River. Pawns on a long diagonal have only one capturing move, along it toward the opposite camp, until they make a noncapturing move (after which they revert to the normal one noncapturing and two capturing moves) or cross the Rivers. In the absence of multi-coloured Bishop+Camel compound images for the Caliph I have used an image more usually used for its entirely short-range counterpart but on this page represents the full Caliph.

Restrictions on crossing the 2-player variant's single River apply only to River sections not bordering the player's own quarter (confining each Elephant to 10 squares). Pieces can cross sections bordering their quarter unrestricted unless confined in the 2-player version to a Fortress, which becomes an area the same size in the corner of the board.

Pawns and their Oriental counterparts reaching the far side of any River acquire the ability to make a capturing or noncapturing move one step either way parallel to that River. Pawns in the opposite quarter lose the ability to capture diagonally to move as Wazirs. When leaving that quarter both pieces move within the adjacent quarter as if they had arrived from their own.

A player is Checkmated when their King is threatened by the player about to move. That player's pieces are removed. The first player Checkmated loses and the player delivering the last Checkmate wins. In a series of games the winner scores 3 and the rest 3 minus the number of other remaining players when they are Checkmated.