While creating Irwell I referred back to Avon and recalled the older variant's unpromotable forward-only pieces, whose defintion of "forward" changed whenever they crossed the River. Irwell had just one such piece, the Princess, which was a simplification. Then I considered that switching the meaning of "forward" after crossing a River might be an interesting alternative to promoting forward-only pieces in relatively simple, unthemed games of the Shogi kind. This inspired me to apply the basic idea behind Avon and Irwell - 4 players, each of the 6 possible pairs differing by moving opposite armies and/or operating opposite sides of the River - to Mitregi.

I decided to really simplify by starting with a 9-file army (no Knights or Camels) and stripping out the part-symmetric generals (freeing the physical pieces to represent Mitres and Humps), and found that I could accommodate the remaining pieces on a FIDE-sized board - although the armies themselves are of Shogi size.

Up-for-Deletion Variants
This variant has has poor reviews. I would therefore be interested to know whether other CVP members agree that this variant should be dropped. 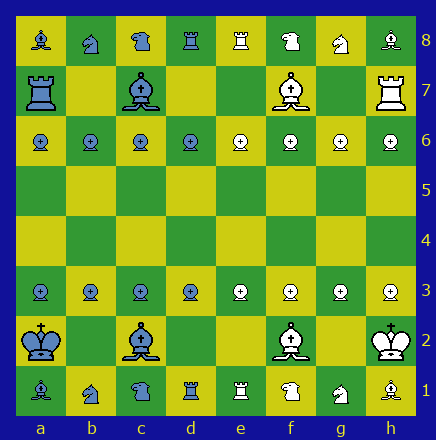 Play proceeds in a figure-of-eight starting with the White player on the side of the River with the Kings, then the Black player on the same side, then the White player the side with the Rooks, then the Black player on that side, and so on. A player must (unless it fails to relieve Check) make a move either starting or ending on their side of the River. The latter option to the exclusion of the former is open only to Kings, Rooks, and Bishops as forward moves are defined in terms of the player making the move.

A Point crossing the River is uniquely promoted to a Wazir, but a captured Wazir returns as a Point.

Check applies to both an army's players. If and only if a player cannot remove their King from Check with a move starting or ending their side of the River, they may do so by a move entirely on the other side. If they cannot do that either they are Checkmated and their team loses. On the other hand if their King is not in Check but no move starting or ending on their side of the River keeps it out of check, they are Stalemated and the game is a draw.

Although the armies are Shogi-sized there is a problem of having one Bishop extra corresponding to one Point fewer. This requires some kind of improvisation such as balancing two pieces vertically - if you can suggest a better one using a single Shogi set I'm interested to hear it. Pieces should actually point sideways to mark their allegience.

As Helms and Humps quickly become very weak an alternative might be to use a piece with half the Knight moves and one with half the Camel moves. One option is to add the backwardmost moves to give the Nightranker (i.e. "Knight restricted to moving more ranks than files", bound like a skewed Dabbaba) and Camelranker (i.e. "Camel restricted to moving more ranks than files", bound to 1 square in 6) of my piece article Man and Beast 12: Alternative Fronts. A more interesting one is to add the sidewaysmost backward moves to the Helm and Hump to give the Crab and Cram, which are no more colourbound than the fully-symmetric pieces and retain at least some forward-backward imbalance.