This is my third page featuring a 84-square variant, the first being the 4-file forms of Tryzantine Chess and the second the Filled subvariant of Commedia dell'Arte Chess. All three were invented long after the contest was over, in contrast to 3d Minishogi which was specifically invented for a contest that never happened.

The variant starts with the FIDE board and separates it out into the Black King's, Black Queen's, White King's, and White Queen's quadrant. These are all moved two files/ranks apart and twenty extra cells inserted to form a central 6x6 supersquare overlapping with the 4x4 ones. Pawns are moved forward to the edge of this to block the linepieces from moving before they have, although there are two squares from which each Knight can leap unmoved Pawns, in each case arriving at the inner corner of their quadrant. 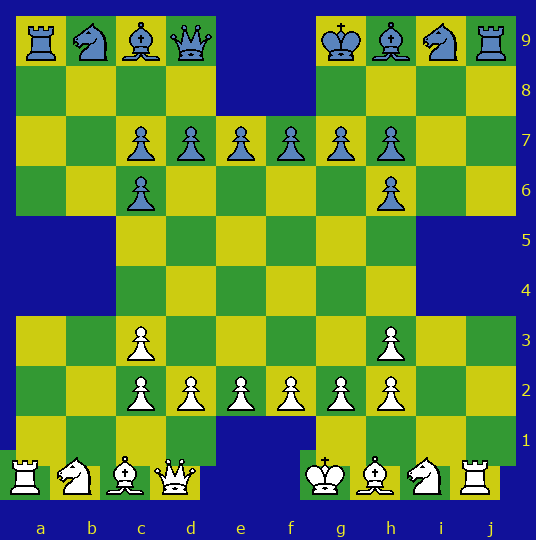 The one-foot-in-the-grave rule applies, so that pieces moving between the central supersquare and an outer one must do so via at least one square of the intersection, either between moves (the only option for Knights) or within a longer move.

The six rear Pawns can move two steps on their first move, if it is noncapturing. The front two cannot, both because a single first move brings them to the same rank as the rear ones' double step and to obviate distinguishing them from rear Pawns that have moved forward one step. Any Pawn making a double-step move may immediately be captured En Passant by enemy Pawns.

As Rooks are already so mobile there is no Castling.