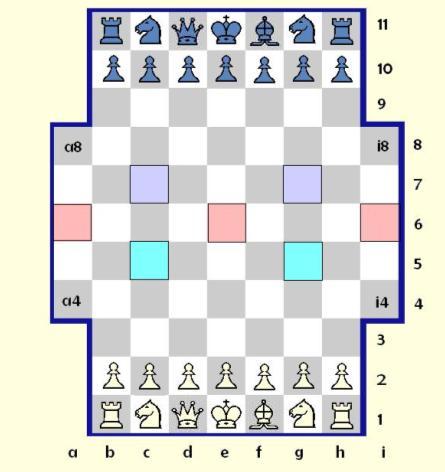 I visualized this game while discussing, with game designer and CV Editor, Jeremy Good about how pieces might act if they could appear at the same time in different places. An interesting concept that Jeremy presented. I immediately envisioned a game with two possible boards [the larger of the two has 10 mirrors instead of 7; and is shown in Setup and discussed briefly in the notes]. This game certainly would not have appeared to me had it not been for the discussion with Jeremy. Object of the game is to checkmate your opponent.

Setup for the smaller game (7 mirrors) is as in the above diagram. Note each side has one Dragon Horse (which moves as a King or Bishop). There is no ordinary Bishop. Setup for the 10 mirror game is as follows: 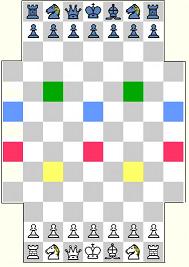 How to Play: Play is much like that of Fide Chess. Pawns move and capture as in Fide chess, including initial 2-move option. PAWN PROMOTION: Pawns still promote on the 8th rank. In the normal game this is the a8-i8 rank for White and the a4-i4 rank for Black. Pawns can promote to R, N, Dragon Horse, or Queen. In the Ten Mirror game pawns also promote on the 8th ranks. In the 10 Mirror setup diagram White pawns promote on the rank with 3 blue mirrors. Black pawns promote on the rank with 3 red mirrors. PAWN EN PASSANT There is Pawn en passant. CASTLING There is castling. To Castle, the King moves 2 spaces left or 2 spaces right, the same-side Rook then moves to centermost space next to the new King position. MIRROR EXAMPLES Three examples explain the concepts of the mirrors and the reflections. Mirror Thumb Rules follow the examples. NOTE: PAWNS CAN BE REFLECTED JUST LIKE PIECES. ====== E X A M P L E S ================ EXAMPLE 1: Black (Blue) to Move. In the red mirror-zone we see a Blue Horse on i6 and its reflections on e6 and a6. (Top Diagram). Blue can capture the REAL Knight on c5 with either refection (a6 or e6). In both cases the reflection would become real and the original REAL Knight on a6 would de-materialize. The new real Knight on c5 would now be reflected on g5 (bottom diagram). 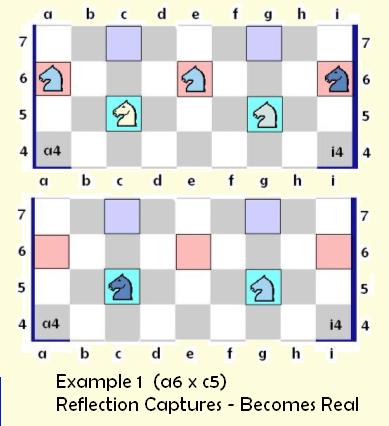 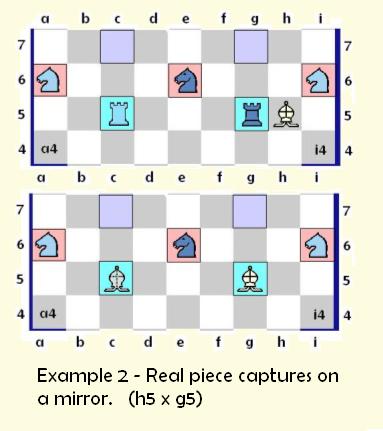 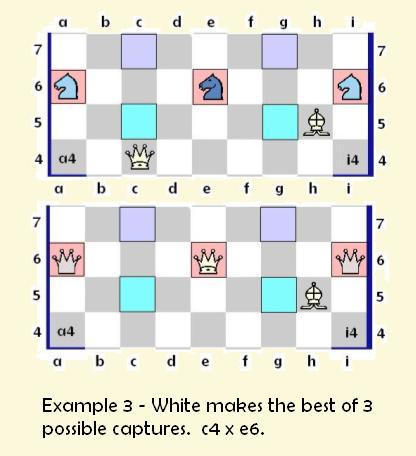 If Q x a6, then both reflections disappear, but the real Knight would remain on e6. If Qxe6 (bottom diagram), The real Knight is gone and Queen reflections appear on a6 and i6. Had White played Dragon Horse x i6, both reflections would disappear and the real Knight would remain on e6. +++++++++++ MIRROR THUMB RULES ++++++++++++++++++++++++++++++++++ 1) A Piece [or Pawn, or King] on colored mirror square has reflections appear instantly on the other mirror(s) of that row, providing that the other mirror(s) is vacant. 2) You can land a piece on a reflection (friend or foe) and the reflection disappears. 3.1) Reflections will disappear if (3.1.a) displaced by another piece, or (3.1.b) if the real piece (which they reflect) is captured. In case "b" a new reflection will appear. 3.2) On the central row (with 3 mirrors): the following applies: (3.2.a) if 1 mirror has a piece on it, then the other 2 mirrors reflect it. (3.2.b) if 2 mirrors have the same piece and same color, the third mirror [unless occupied] will reflect that common image. (3.2.c) two dissimilar pieces in type (and/or color) mean the third mirror will have no reflection. But, if one of those pieces moves, then the reflection of the remaining piece appears on the two vacant mirrors. 4) A reflection can move off of a mirror. When it does so it becomes a "real" piece. A reflection can therefore capture a piece. Whether there is a capture or not, when a reflection becomes a real piece the original piece [that it was reflecting]de-materializes (turns in to photons for Sci-Fi fans). 5) You cannot swap places between your real piece and its reflection. 6) If playing Variant I reflections can block. If playing Variant II reflections can be passed through.