Gnu is a simple chess variant played on a board with 5 files and 10 ranks. The name Gnu comes from one of the featuring pieces. It is the piece with the shortest name, so it should express the simplicity of the game. There are five different pieces of which one (the Gnu) can only be acquired through promotion. 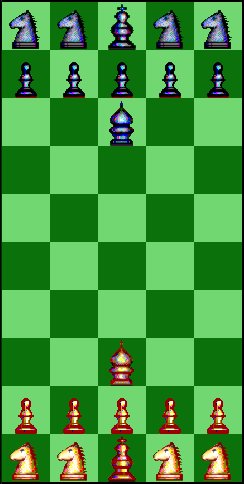 The King, Knight and Pawn move like there namesakes in chess. However, there is no castling. Pawns' initial double step and en-passent capture are the same as in chess. Promotion, however, is different.
The Ferz moves one square diagonally. No piece can capture the Ferz. This piece appears in other games as an Iron Guard
The Gnu moves either like a chess Knight or like an exaggerated Knight, moving three squares in one direction and one over. The exaggerated Knight is called Camel in other games. The Gnu, which is the compound piece of a Knight and Camel is also called Wildebeest in games. There are no Gnus in the starting arrays. Gnus are acquired through promotion.

The main element of the game is the board's shape. Pieces act differently on a 5x10 board than on an 8x8 board.