My Armies of Faith series was 3d throughout for three reasons. Firstly it used pieces making only 3d-specific moves - Nintu, Elf, Fortnight. Secondly it used compounds of a component existing on square but not hex boards and the other vice versa - Moderator, Pope, Baroness. Thirdly it uses simple pieces existing on square but not hex boards in the same game as ones existing on hex but not square boards - Pawn, Knight, Gryphon alongside Rabbi, Unicorn, Simurgh. Separating out these last pieces allowed the development of 2d offshoots. 2d AOF2 offshoots include Flatstar for hex pieces and Guru Mahachaturanga for square-board ones. The latter also offered a format for pairs of AOF4 armies, stripped of their 3d-specific pieces. AOF6 however brings the Bishops and all their AOF4 compounds together in one army, and I wondered about a 2d variant between two identical armies each including as many of those pieces as were avalable in 2d. Another piece used from that army was the Camel. This variant is the result.

As I was using so many Bishop compounds it seems logical to have the corresponding Rook compounds, as added in AOF5, as well, although AOF6 itself distributes Rook compounds between all four armies. As I had brought four of these compounds together before in my Ecumenical Chess, which was also on a theme of the Bishop compounds' names, I decided to include the other Ecumenical Chess compound, the Gnu. Finally I decided to include the Bent components of the Ancress and Metropolitan, and the Bent pieces' compounds with each other and the "other" straight piece. I did not bother with compounds of an oblique leaper and a Bent piece.

When deciding where to place the pieces on the board I analysed the logical numbers of each piece. 2 of each simple piece and 1 of each compound one would give 26 pieces (excluding Pawns), but 1 Caliph was unsatisfactory as the piece is colourbound I had to up it to 27. That suggested having 9 files, to fit them all in without gaps. It took a few trial arrays to give adequate coverage of Pawns, but eventually I found a satisfactory one.

That just left the name. Two that I considered were Tripunch Ecumenical Chess, in allusion to having two of the pieces from Tripunch Chess, and Deluxe Ecumenical Chess, after the sheer concentration of pieces. The second lacked the right thematic ring, and the first was positively misleading as the Tripunch pieces were there as compounds of weaker pieces rather than basic pieces that had their own compound. Then while listening to B.B.C. Radio 4 I heard a radio play called Conclave, about the election of John Paul the Second. This made me think of my concentration of a wide range of religious titles including Cardinal, and of the 3d Pope that could not be included but was very much in mind. Thus was born the name Conclave Ecumenical Chess. 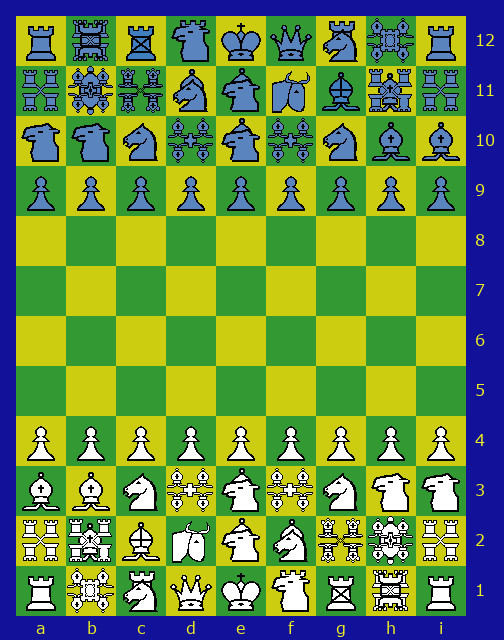 Pawns have an optional double-step initial noncapturing move. When doing so they can immediately be captured En Passant by any enemy Pawn that could have captured them had they made only the single step.

A King can Castle with a Rook or Gryphon. In both cases the King moves two steps sideways and the other piece moves to the King's halfway square. Both pieces must be previously unmoved, there must be no intervening pieces along the back rank, and no part of the King's path may be in Check.

A Pawn reaching the enemy's non-Pawn ranks may be promoted. Promotion is optional and to simple pieces except on the enemy back rank, where it is compulsory and to compound pieces. A promoted Pawn cannot be promoted any further.

The most economical way to represent the pieces is with one each of a FIDE, Xiang Qi, and Shogi set. This uses 36 out of 50 pieces aside while providing 21 piece types of which plenty have 2 aside for the simple pieces and Caliphs and one 9 aside for the Pawns.