It is thus perhaps surprising that the few existing variants using this board have all used such unorthodox armies, rather than two (but probably not three) suitably compacted Wellisch/Glinski/McCooey ones. On this count I discover that I myself contributed to the unorthodoxy with Mixed Radial Hex Chess. Its pieces are strongly directionalised as are - in a different way and over a shorter range - the rotating ones of Larry Smith's nautically-themed Stations. John Cleaveland's Ludus Chessunculus and Larry Smith's heavily theme-driven HiveQueen also use highly unconventional pieces. Christian Freeling's Hex Caissa is as minimalist as its name suggests. Glenn Overby's Panal is the best of the bunch with its superbly short-range and "amphibious" (unbound through mixing two independent bindings) Knight analogues (an idea that I used myself, later but independently, in my 91-cell Trebuqi).

In the Glinski-McCooey orientation (easily recognised straight orthogonal files, and chevron-shaped ranks) it is simple enough to use two (but again probably not three) McCooey or Anglojewish Chess armies on the reduced board - in fact the latter page includes such an array. The Wellisch orientation (easily recognised straight orthogonal ranks) is a bit more worthy of its own page, and it is on this orientation that I concentrate here. It soon grew clear that there would be room for only two armies, each using three of the nine ranks to cram each player's pieces into. This gives a pattern of ranks is common to both players.

It was fairly easy to compact two armies of the Wellisch game itself, the oldest of the main hex games, as only short-range moves use the hex diagonal. This is the page's first variant, and needs little explanation.

Wondering about compacting the Glinski or McCooey game I realised that Unicorns starting on odd cells of the back row would not only cover a binding each but also initially be blocked by the front row. In practice the Glinski-McCooey distinction gets blurred as I soon found myself agreeing with Siegmund Wellisch that this orientation made divergence an unnecessary complication. The second variant has what I term a revergent hex army, with the symmetric pieces common to Glinski and McCooey but reverting from the divergent Migrant and Broker back to the older (and on Wellisch boards dual-direction) Point. Substituting Curved linepieces for Straight ones and weakening the royally-restriced piece gives a perfectly valid Wellisch-orientation compact Anglojewish Chess. This I define relative to the Revergent array rather than displaying its own.

As the Point is a Shogi piece even on square boards I considered compacting Fergus Duniho's Hex Shogi which uses this piece and its rider so superbly. A slight oddity is that the symmetry between opposing armies is mirror rather than rotational to preserve the square Shogi - and Hex Shogi 81 - lining up of the diagonal pieces with each blocked by an allied Point. I also remove "Super"/"Ultra" aspects of certain pieces as the simpler pieces should suffice on the smaller board. This I term a Simplified Hex Shogi army. The substitutions of Wellisch-orientation Hexgi give a satisfactory compact Wellisch-orientation Hexgi, which I define relative to the Simplified Hex Shogi array rather than displaying its own.

Armies can also be mixed and matched. Of particular interest is Simplified Hex Shogi versus Revergent, as this can be seen as another illustration of the Japanese part in World War 2 along the lines of the square-cell Uncrossed Shogi versus Unhexed Chess. 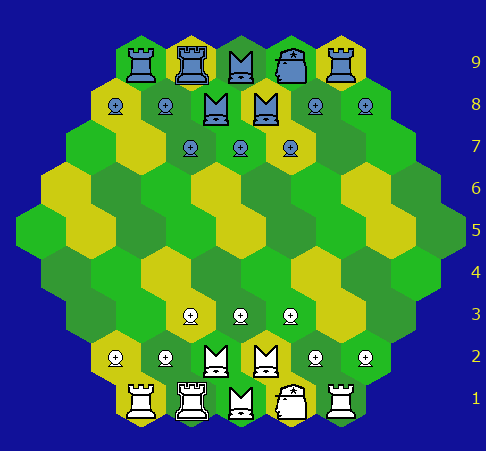 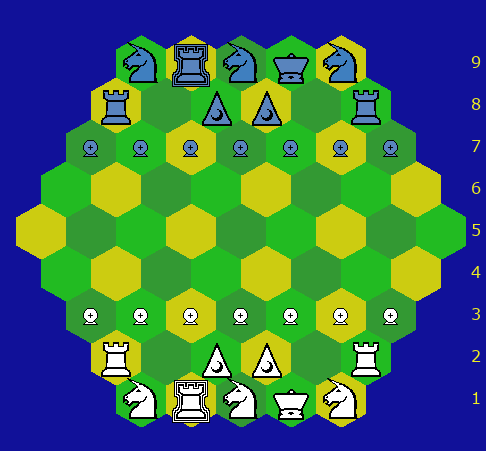 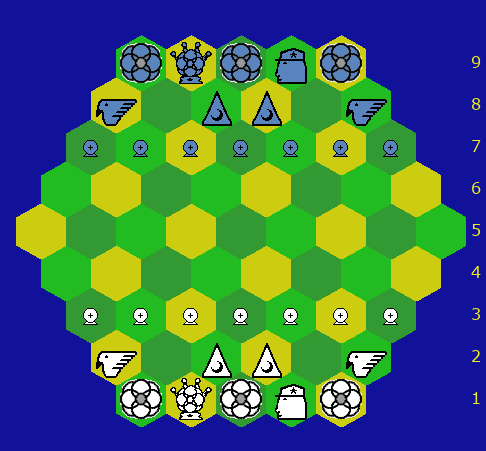 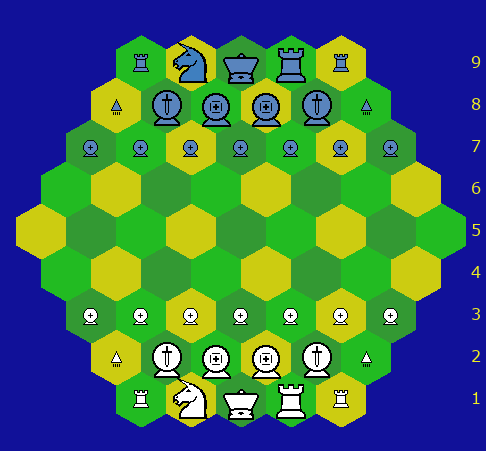 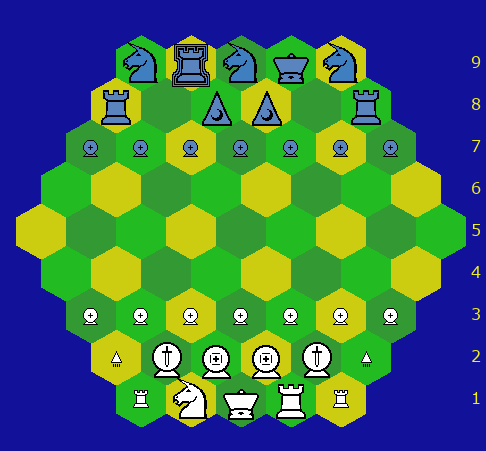 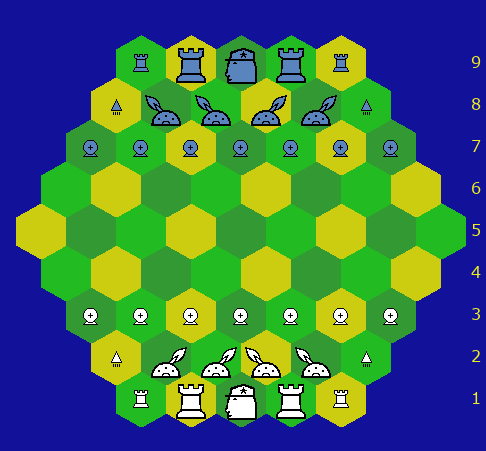 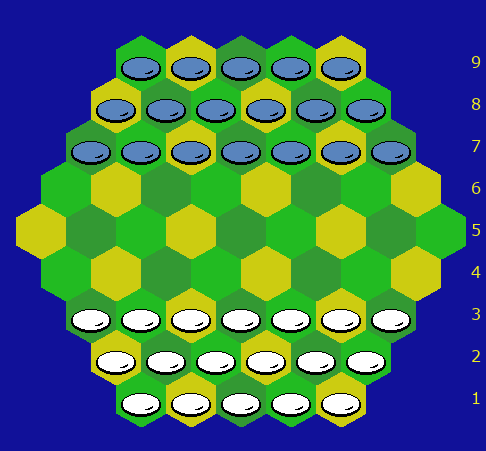 In variant S the Rook is promotable to Vicereine and the Unicorn to Besieger. The Azuregeneral, Wing, and Point are promotable to Brassgeneral.

In variant H the Wing is promotable to Wazirranker.

In hex Orthogonal Draughts, Twice-Pawns completing a capture can make a further capture within the same move if one is available. Likewise when completing that second capture and so on. On reaching the enemy camp they are promoted to be able to move and capture along all six diagonals. Both pieces can make any number of successive capturing moves, but may make a noncapturing move only between two enemy moves.

Simplified Hex Shogi pieces can return to the board unpromoted, in a location where they can move in that state, in place or a normal move. Note that in the case of Senhelms this excludes the entire enemy camp and the end cells of the two previous ranks. Senhelms returning to the front corners of their new home camp must make the more inward of their two moves, to avoid landing on a cell outside the enemy camp whence they have no further move.

I gave much thought as to how pieces should return from capture in Simplified Hex Shogi versus Revergent. As the differential in piece numbers is reduced compared to the 91-cell games, I decided to make it player-dependent rather than piece-dependent. On the other hand bringing Duchesses into the Simplified Hex Shogi army might bias the game too much to them, so I decided that pieces should return as their positional equivalents - Rooks as Wings, Sennights as Senhelms, Unicorns as Azures, and Duchesses as Brasses. Nothing returns as a Unicorn or Rook. Promoted Points are treated as whatever they are promoted to. Hex Shogi pieces captured by the Revergent army are lost from the game.