This page is written by the game's inventor, Joel .

This is an attempt to completely deviate from the opening Chess theory. Here the players can surprise their opponents byÂ  developing the powers into a new square during the openings.Â 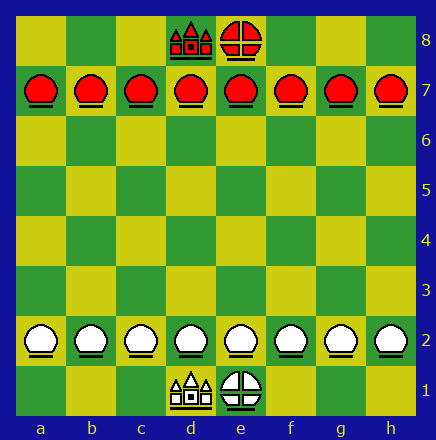 In the initial setup only the pawns, the Queen and the King are placed on the board. The remaining pieces are deemed to have been placed on either side of the board. They are developed creatively byÂ the players.

Same as in FIDE Chess.

One Rook, Knight and Bishop must be placed on the kingside and queenside each. That is, no two pieces can be placed on the same side of the board. Initially they are deemed to be present on the board but their placements are not revealed at the start of the game until a move is made from these pieces. The players can place the pieces depending on the opening position that arrives. But once a move is made, the placement of the same piece on the other side of the board must be made immediately. For example, if White plays 1. Nb3, then the other Knight on the king side must be placed immediately either on f1 or h1. But the placements of rook and bishops need not be revealed. On making the move of Bishop or Rook, the placement of the other Bishop and Rooks must be made immediately.

The set up of powers of black and white need not be symmetrical. Players can surprise by placing their powers depending upon the opening situation.

The castling rule is the same as that of Chess960.

All other rules of Chess apply.

(revealing that the rook was placed on c8. And so, the other rook must be placed immediately on f8 which is the mirrored square on the king side)

3. Nb3 (attacking the rook. And so the other Knight must be revealed by placing it either on f1 or h1. Here, the Knight is placed on h1)