The rules of this game are from the Windows PC software game by Steve Nichols & Daniel Schostak called 'Chaturanga'. The variant is called 'Double Mate' and it is played without dice.

This is a two player game, with each player commanding two armies. One player has the yellow and red pieces, and the other player has the black and green pieces. The turn order is yellow, black, red and green.

1. Kings cannot be captured, they can be mated, like normal chess. The game can be won by mating both kings or by reducing both kings to lone kings.

2. An army that is mated cannot move, it must pass on the turn, and it's pieces and pawns can be captured (except the king).

3. An army in checkmate can be freed from it's checkmated state. If an army becomes freed from mate, it can again start to move every time it is their turn.

4. A king can never move into check, even if the check comes from a piece whose king is checkmated. A king in check must move out of check or block or capture the checking piece, like a normal chess king.

6. This game is not played with dice.

So, this game can be very exciting, with players getting mated and fighting with one army against two, freeing their mated army, having one army from each side mated, some games can be very grand indeed!

At the end of this article, i will also briefly talk about a variant in which 4 people play the game, with everyone against everyone! 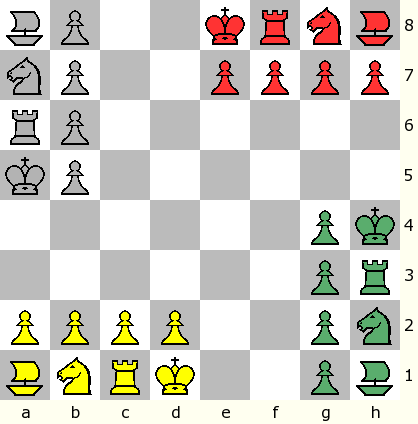 King: moves like a normal king, one square any direction.

Ship: leaps 2 squares diagonally, always passing over the first square. It moves exactly like an elephant, or alfil. 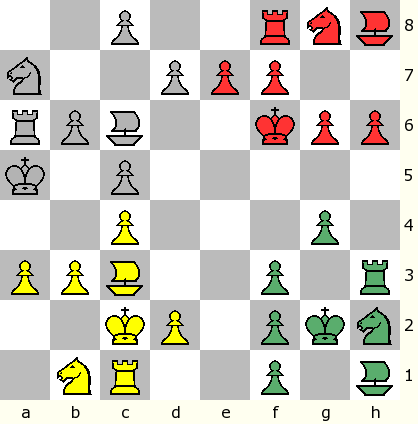 It is possible that a checkmated army can be freed from it's checkmated state. For instance, if the black army is in checkmate, the green side can try to free black from being in checkmate. If the green army is successful in freeing the black king from mate, then the black pieces can start moving again. Another point that must be mentioned is in connection with the king not allowed to move into check. A king also cannot move to a square that is being attacked by an enemy piece, even if that enemy piece's king is in checkmate. A piece also cannot move if it allows it's own king to be attacked by an enemy piece. However, for example, a red piece may move even though by moving it allows the yellow king to be in check. Remembering the red and yellow sides are teamed together, this move is still possible. So if a red piece moved, and that uncoverd a black rook attacking (checking) the yellow king, that move would be legal. This sometimes would mean that you could have the move and already you are attacking (checking) an enemy king. i will now show a position that arised from a email game between two friends of mine, which will illustrate the above points. The yellow side earlier in the game sacrificed their rook for an attack, and on the 6th move played pawn b2-b3, checkmating the black king. After black passed on the move, red played pawn h6-h5 and green played pawn g4-f4. Now we arrive at the diagramed position below with yellow to play their 7th move. 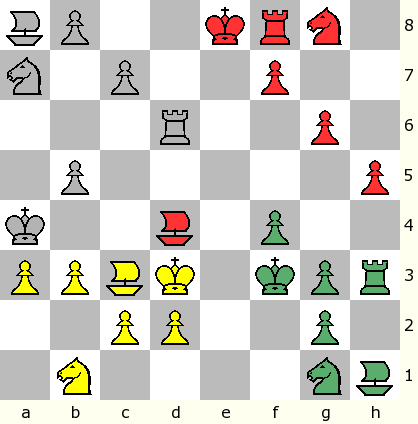 This is pretty interesting and fascinating position! Yellow to move, black is in checkmate, and the green side can checkmate yellow with pawn f4-e4. Please note that the yellow king cannot move at all, because the c4 square is attacked by the black pawn at b5 (even though black is in mate). This position shows the 'drawback' sometimes when you have someone in mate, your pieces are tied up, cannot move, unless you want to release your enemy from mate!! In fact, the only pieces yellow can move here is the b pawn and ship. Moving the b pawn would release black from mate (not in check anymore), and moving the ship would give black a square to move the king and therefore releasing black from mate. So in the game, yellow moved the ship and black was released from mate and the black/green armies eventually won the game. Now another point in the above diagram to note is, if it was red to play, red could move the ship on d4, even though exposing the yellow king to check. If the ship on d4 was a yellow ship, it could not move, because it would be exposing it's own king to check. One thing that you have to watch out for in this game is a kind of combination played by both different colors of one team, against one army. The following diagram will illustrate what i am talking about. It generally involves a check, but doesn't have to, it could be a combination without a check. In the diagram below, black is to move, and black can play this above mentioned combination. Black can play rook takes knight on a3, even though it appears that the yellow knight on a3 is protected. Here is the position. 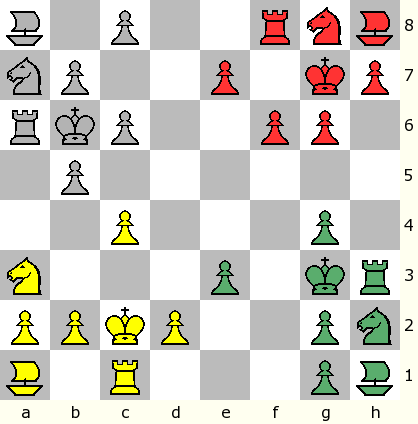 The reason black can take the yellow knight at a3 is that after the red pieces play their move, whatever they play, green can check the yellow king with pawn e3-d3, thus forcing the yellow king to move and not allowing yellow to take the black rook with the b pawn. The diagram below shows the position after black played rook takes knight, red moved pawn f6-f5 and green played pawn e3-d3. 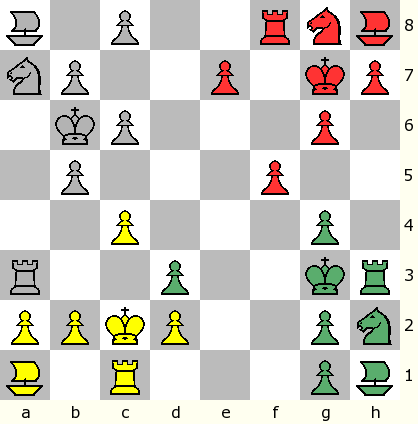 I'll show one more example of this kind of combination. Here black is to move, and again, there is an attack on the a3 square. The diagram below shows the position with black to move. 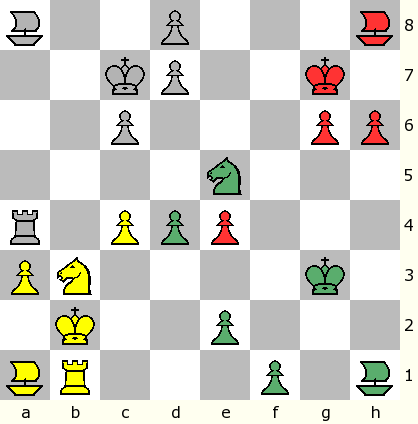 Black can take the pawn on a3, because after whatever move red plays, the green knight to can take the yellow pawn on c4, protecting the rook and also giving check to the yellow king. Note that the check was not neccesary to save the rook, it is just an added bonus hehe. Diagram below shows this continuation. 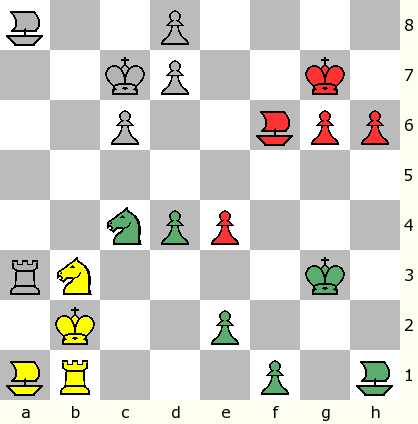 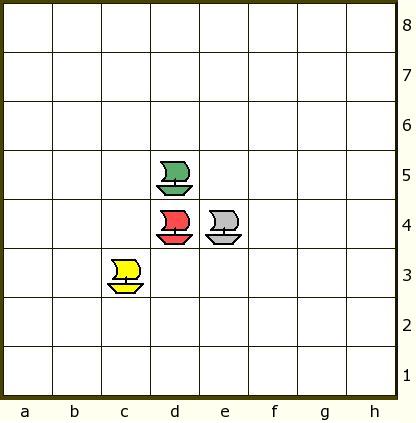 and yellow then moved their ship to e5, thus forming the 'concourse of ships', or attaining 'Vrihannauka', the end result would be both enemy ships are captured and the red ship would turn into a yellow ship! It should be noted though, that you probably have more chance of winning the lottery than ever seeing this. It is very rare :) See below diagram showing result after the ship on c3 moved to e5. 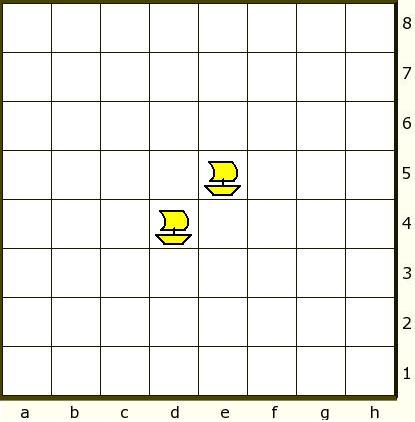 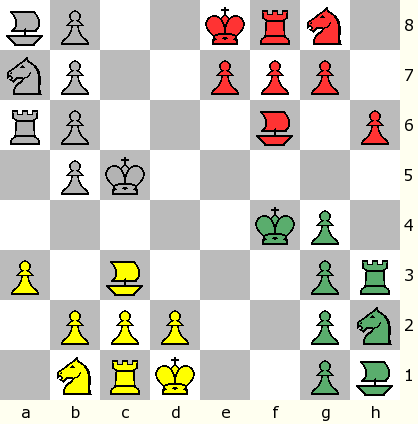 This looks bad for black and green, right? Well, all i can say is, two friends of mine and myself have looked at this position, and all of us think that black and green is better positioned with this opening. I will update this opening position in the future after more analysis. Update; Current thought is, WHATEVER yellow plays here, black plays c8 (pawn b8-c8), and this is WINNING!. If red and yellow move their pawns in front of their King, so as to make room to deal with black and green's ship threats, the black and green King's can move d6 and e3 and this is crushing, threat being ship moves and a double mate coming!! .......................................................................... Summing-Up Alright, i think i have covered everything. I might update this page with additional examples in the near future. I play this game with a couple of friends and have found that most games can be pretty exciting with a high level of games resulting in a win for someone, with not many draws. You can indeed have games that a player has one side mated and frees themself in the course of the game, and also games with each side having one army mated. Fun fun fun!! You can play this game on game courier but it does not enforce the rules. Steve Nichols & Daniel Schostak's program called 'Chaturanga' can be downloaded here. http://chaturanga.net/ ........................................................................... Chaturanga - 4 Kings - All Against All This game can also be played by 4 players, each commanding their own army, and with all sides against each other!! In this type of variant, kings are captured. Kings can move into positions that they can be captured. You are in the game as long as you have a King. Now i know this seems very bizzare, but it appears that it is entirely playable, for i have played this type of game a couple of time's with friends. i might make a page devoted entirely to this type of game soon, seeing it is very interesting indeed. One thing i will just say here, is that if one army gains a material advantage over all the others, well, let's just say the other 3 armies dont really like that, lol. You can have positions where you can move your king into a position that can be captured but you don't have to worry, because if an enemy captures your king, they in turn will lose the piece capturing your king from another player! Also, some positions give rise to some of your enemies not wanting to see you lose anymore pieces because it would mean another player might be able to break through with their pawns and promote to rooks. i will add more here at another date or simply make a page dedicated to this type of variant.

This game can played on game courier under the title '4 handed chaturanga'. It does not enforce the rules.

To be exact, this game should be played on a uncheckered board.

I'm sorry if i repeated myself too much about certain rules (lol).