The Advancer is also used in Advancer Chess and Butterfly Chess.

In Rococo, the Advancer is represented by a ram. Other games have followed this convention, as do the diagrams below.

The Advancer's method of movement and capture are different from each other.

The Advancer moves as a chess Queen - that is, the Advancer can move any number of squares in any direction, orthogonally or diagonally, as long as all the squares it passes over are unoccupied by other pieces. The Advancer can never move to a square occupied by a piece of either side.

In the diagram on the left, the Advancer can move to any of the squares marked with a red circle. 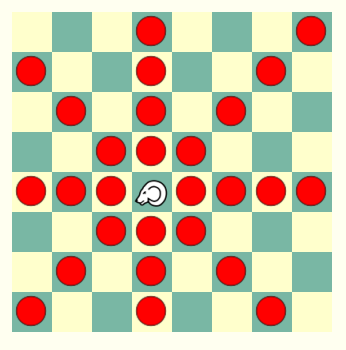 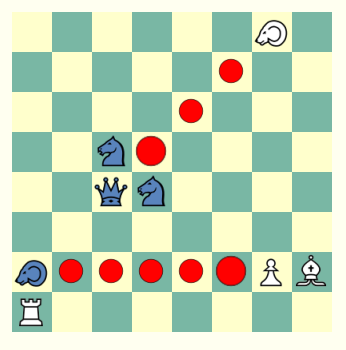 You can also see an animated demonstration of the Rococo pieces, including the Advancer, by clicking here.

The Advancer is a powerful piece, almost as strong as a chess Queen. It can attack pieces from far away, and since it does not capture by displacement, threatened pieces can not be protected by direct defense. Each piece potentially has eight locations where it is vulnerable to Advancer attack. The Advancer's biggest weakness is that it can not capture pieces on adjacent squares; if a piece is threatened by an Advancer, often the best defense is to move next to it.

Note that it is not possible for an Advancer to attack an another Advancer without being attacked back, unless that Advancer is pinned or immobilized.

In the endgame of an Advancer and a King against a lone King, the Advancer and King can force checkmate. The process is similar, but not identical, to that used to checkmate a lone King with a King and a rook — the Advancer boxes in the opposing King, driving it into the corner. The trick in this case is to keep your own King between the opposing King and your Advancer, since otherwise the King can move adjacent to your Advancer and slip out of the net. Once you've driven the King into a corner of the board, you must gain opposition with your King, meaning your King and his King must be on the same rank or file. In order to force this, you may need to make a move with your Advancer to both gain tempo and cut off the enemy King. This is illustrated in the diagram below. 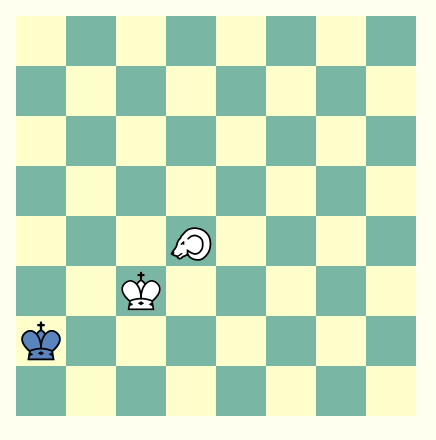 This is an item in the Piececlopedia: an overview of different (fairy) chess pieces. Written by Benjamin Good
Updated by Greg Strong WWW page created: 2002-08-11
WWW page updated: 2020-12-16 ﻿