After creating Nearlydouble Chess I began considering how to apply to large variants the same principles as that variant applied to FIDE Chess. The first to which I considered applying it was Wayne Schmittberger's Wildebeest Chess, which a comment on Nearlydouble Chess agreed was a good idea. Due to that comment I fast-tracked this variant.

Again I use a single King and twice the number of everything else, with oblique pieces slightly enhanced. Again I nearly double the number of squares - this time from Wildebeest's 110 to 210. This gives a piece density of 40.95%, very close to Wildebeest's 40%. Squares are arranged in 14 ranks by 15 files - like Wildebeest files exceed ranks by one.

Pawn structure is based on Nearlydouble Chess. Again enhanced oblique pieces are brought forward to the second rank, protecting front Pawns not protected by back Pawns. This gives the oddity of gaps in the first rank, but that is the price of preserving so much else of a game of Wildebeest's size scaled up to nearly twice the squares and pieces. 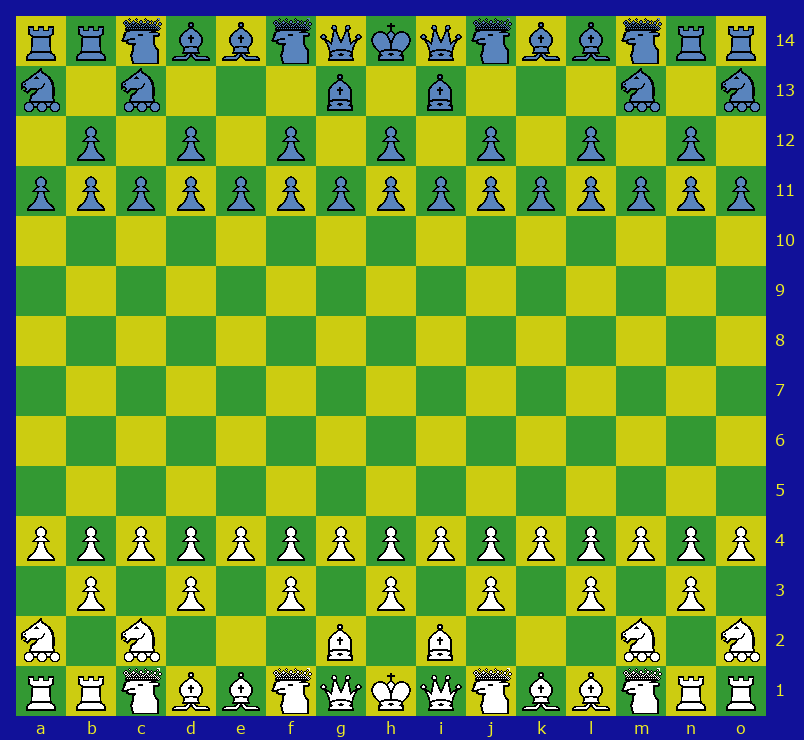 As the enlargement weakens the 2:1 Knight, its dual the 3:1 Camel, and their compound the 2:1 and 3:1 Gnu (or Wildebeest) compared to other pieces, I enhance them to Man and Beast 08: Diverse Directions pieces. The Knight becomes the 2:1 and 3:0 CATAPULT, the Camel the Catapult's dual the 3:1 and 3:3 CAMPER, and the Gnu the Catapult+Camper compound the 2:1, 3:0, 3:1, and 3:3 ACHATES. These pieces' radial moves are as unblockable as their oblique ones.

The variant can be played with just three FIDE sets as long as one (ideally the smallest) can be distinguished from the other two (which are ideally identical). For example, use small Bishop for Achates, small Knight and Rook for Camper, and all Pawns interchangeably.